Horse Rescue: Not for the Faint of Heart. 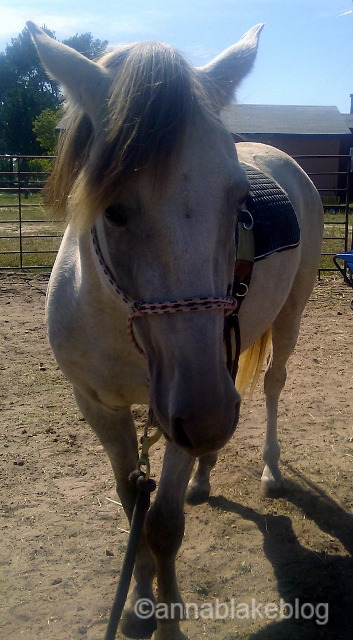 Lots of people say they have a rescue horse these days. It’s a term we use when we think we’re a better home than where the horse was before. We feel special doing a good deed and there’s no crime in bragging. People who take good care of horses should be proud of it.

It’s also an easier way to get a rescue horse. One of the counter-inutitive things about getting a horse from an actual rescue is that there are some hoops to jump through to adopt. It might seem that since no one else wants them, rescue horses should be free and easy to obtain, but the opposite is true. Once a horse is saved from a bad situation, the rescue tries to guarantee that the same thing doesn’t happen again. The new home has to be a little better than good.

There is an application to fill out that’s careful to ask all the right questions about your experience and references. Ongoing vet care is crucial. There’s a home check and if all that goes well, an adoption contract (sample here), with the condition that the rescue will be able to check on the horse. Adoptions don’t become final for a few months. Rescues ask for a serious commitment–these special horses have seen the bad side of our species. It isn’t that they need more, they just deserve better.

Most adoptions have happy endings, like the adopter who gets her elderly and unride-able gelding massage. The last time I saw him, he was frolicking around like a 2 year old. It’s a forever home.

And there are sad endings in rescue, too. Some horses come in starved and begin the re-feeding process, but their organs are too damaged and they don’t make it back. The best that can be done is give them some kindness and a better passing. Each life is valued, each loss mourned.

Some are adopted out as sound and well-trained riding horses, and like a gelding a couple of years back, then returned used-up and lame after over-jumping him against recommendation. His rescue home crippled him and then had the nerve to complain. So the rescue set about helping the horse again.

It’s hard work. No one is happy to relinquish horses, it’s always sad and emotional. Trying to discern good matches between the horses and potential homes isn’t easy, it’s a decision made with due deliberation. And usually it’s a great match, with photos shared every year, along with positive updates, and gratitude all around.

Sometimes things don’t work out. Sometimes a rescued horse needs a second rescue–like the two minis adopted to a home over a year ago. On a later visit, the horses appeared thin. Their long coats were deceptive, but bones were easy to palpate. No one had bad intent, but the adults didn’t pay attention. The minis were worse than they appeared. The smaller of the two had lost just over 100 pounds–one third of her body weight. Her eyes were dead.

*Pause* Readers who have ponies or minis will need a moment to pick up their chins. Hard to imagine what would have to happen for a pony to loose a pound, much less a hundred.

Required vet care had not been done, the little mare’s teeth were bad enough to limit her digestion. The second horse was equally thin, but being young enough to withstand the neglect never makes it okay.

The rescue came with a trailer the next day and a very sad young girl loaded her ponies. They would need special feeding with supervision several times a day. With a huge storm due that week, the rescue took no chances with their precious lives.

Then the human side came apart. The adopters felt insulted; they denied the obvious and made excuses. There were angry emails and name calling toward the rescue, threats of attorneys and bad mouthing of all of the professionals involved. A young girl was devastated, she had done her best. Emotions ran hot and outsiders were dragged into the debate. The adopter was hurt because her ego was challenged. She wanted to be thought of as the sort who took in rescues, but actions spoke louder than words–even shouted words.

I noticed that through the bickerfest, the adopter never asked how the horses were doing.

And finally, I get to my real point. The rescue did their job, they held to their purpose. The thing to absolutely love about horse rescue is that, even when it’s hard: Horses come first. It isn’t always true in competition, not always true in youth programs, or even in your neighbor’s pasture.

This is where I start to sound like an ad for the Marines. If you are strong enough to do the right thing, committed enough to follow through, and just generally a cut above the average horse owner, please consider adopting. Put horses first. If you have ever been rescued by a horse, and most of us have, return the favor. Make some room in the barn, please adopt or foster.

And please, if you see neglect or abuse, report it today. The longer it goes on, the harder the rehab is for the horse and the rescue.

And in this season of giving, instead of one more foreign-made trinket, consider sending a donation to your local rescue, in the name of your friends and family. My choice is always Ruby Ranch Horse Rescue. They are heroes, you can be proud to stand with them.

“My doctrine is this, that if we see cruelty or wrong that we have the power to stop, and do nothing, we make ourselves sharers in the guilt.”
-Anna Sewell, (1820-1878) Author of Black Beauty