The Ontario Junior Dressage Team won the gold medal in the FEI Junior Team Competition yesterday at the 2009 Adequan FEI North American Junior & Young Riders’ Championships, held July 21-26 at the Kentucky Horse Park in Lexington, KY. The Ontario Gold Medal Team, comprised of Zachary Ball of Mountain, ON, Alexandra Dvorak of Hillsburgh, ON, Megan Lane of Collingwood, ON, and Maura O'Sullivan of Toronto, ON, scored a decisive win with a team total score of 196.433, almost six points ahead of the silver medal team. Megan Lane won the class with her eight-year-old Dutch Warmblood mare Caravella scoring a very impressive 67.189%! 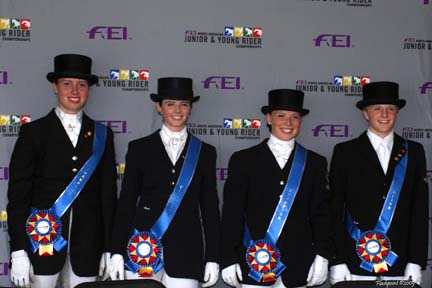 The Canada East Young Rider Team came in 4th place on July 22 during the team competition with a total score of 191.843 and was comprised of Jaimie Holland of Caledon, ON, Amy Jager of Puslinch, ON, Annie-Pier Venne of L’Assomption, QC, and Daisy Kosa of Toronto, ON.

CONGRATULATIONS to everyone! Way to go CANADA!!