We hit a home run for the first weekend in March. On Saturday, it was a chilly start, but it was just so nice to be out on the trail. We took Cole and Ranger together. When we first crossed the river, we did a little trotting because the footing was good. The trail goes along a fence that has a paved trail on the other side for bikes and walkers. We made it about 5 seconds before Ranger tossed in a little buck. We brought them down to a walk for a few…

Teaching a Horse To Stand Still

One of the more important things people ask me is, How do you communicate to your horse that you want them to stand still?" This is something everyone would like their horse to do at some time or another. Its nice if a horse will stand quietly when you are working around them, while grooming, saddling, or mounting. It also can help for when you tie your horse for any reason. If they understand that you want them to stand still, then they don't fuss and get all anxious when…

Talk is cheap in the horse world, like most places. We talk about what our horses mean to us and the goals we have. Goals can be ambitious or humble but we all have a direction we are heading, even if the goal is deceptively simple- just being happy in the saddle.

Meet the Ringmaster from WEF, the world's biggest horseshow!

"I was born about 150 years too late." This seems like an odd comment coming from someone who looks positively Victorian dressed in a bright red coat, tall boots and a grey top hat. But Cliff Haines is taking a break between presentations and told me he would have loved to be a cowboy riding the…

Confessions of a Horse Novice Trainer

Or, Are our horses really broke?

A little more than a month ago we had an opportunity to go on a "gather". I knew we would likely not be much help to the real cowboys, but it would be a good experience for both me and Jessie.

It was an early morning wake up, followed by an hour trailer ride and then, I wasn't really sure what to expect. As it turned out, we got to this nice little flat…

Here in Virginia, we are bracing for a winter storm this week. I thought I would take this opportunity to offer some tips for weathering the blizzard and coping with the worst that winter has to offer. Here is a somewhat humorous look at preparedness and what happens if you are not so prepared!

How a Horse Should Behave Part 4

Hopefully you have read the first 3 parts to this topic and it all makes sense to you. We Talked about expectation most of all. What we expect from our horse and what they expect from us. We also talked about how if we want them to act in a certain way, we must act in a certain way in order to communicate to them what it is we expect. Here I will give a few examples of how I work with them and a few techniques I use to communicate my expectations to them. We must always remember… 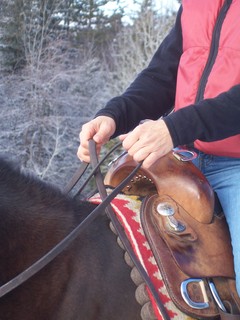 What’s the payoff? A happy horse is trained based mostly on motivation. Relief from pressure (negative reinforcement), or receiving a specific reward (…

Trying to get Magic Moving

Today I got to ride a horse I’ve never been up on before in my life.  Finally, a different horse!

Magic is a teenaged Tennessee Walking Horse mare, black (really brown) with a star on her face.  Still furry with her winter coat she looks sort of thin and rangy.  She stood peacefully for grooming and then I got to see if the saddle I picked fit at all.  I spent around two hours this weekend cleaning, larding and putting stirrups on my old…

This week's blog is going to be about proper tack cleaning and tack care. Being a tack shop providing a variety of leather goods, it is important to know how to properly maintain your equipment. Taking good care of your tack and leather goods keeps it in good condition for a longer period of time, makes it appear new and prevents leather from tearing, ripping etc. As much as we all dread cleaning our tack, it is a crucial part of the sport because our riding equipment is…

It was great to see Cooper tonight, I hadn't seen him since last Saturday. He lost his new halter again that I just put on him on Saturday night, the barn manager said he lost it the next day after I put it on him. I am not buying anymore breakaway halters, it's costing too much and they won't take his halter off because they worry about any of them getting out and not being able to catch them with no halter on. Just in the past week not too far from us, horses had…

Problems with my trainer

Ask Ann –
Problems with my Trainer

A Flying Change… of Season.

We’ve had a long spell of nasty weather. Snow is one thing and wind is another, but a combination of the two is crazy-making. There is real-time erosion that happens; you can see it in the snow drifts and blown sand. It drives horses nuts and it wears away at me, too.