The heat has arrived.  Day after day of highs above 95 F with lows above 75 F, and by the time I get the horse ready I am already drinking lots of water and feeling HOT.

On Sunday I got to ride Cider and try out my new thigh strategy in getting her to move straighter.  My grandson Will was getting to ride Magic the second time and he looked a lot more confident!  While Shannon concentrated on teaching Will to…

Money: If Wishes Were Horses…

“How much does a horse cost? Do you have to be rich to own one?”

I can tell you how much hay they eat, warn you about vet bills and farrier visits. There are many articles and books written about equine…

Yielding to pressure – you, not your horse! "Just get back on! You don't want to lose your nerve."

"Why not enter the trail class?  You're at the show anyway."

"Are you coming out on a hack with us?"

Well-meaning invitations, but sadly, invitations into situations  for which neither you nor your horse are quite prepared.

Have you ever felt pressure to push the boundaries with your…

A little over seven years ago, I started writing blogs on Barnmice.  I appreciate my readers (though a little more feedback would be appreciated) for continuing to read about my boring rides, stuck in the riding ring, proceeding mostly at a walk.  I do hope that you, the reader, have been inspired by my writings to listen to your horse!

Rescue: Training the Things We Take for Granted

Lethargy. Sweltering with a non-specific stickiness. Flies. More flies. Dilly-dallying. These are the wilting Dog Days of Summer, named for Sirius, the Dog Star. No connection to the napping habits of dogs so deflated by the heat that a sploot position on the linoleum is the…

How to Read a Feed Tag

Lysine, lactobacillus acidophilus, selenium, crude fiber, crude protein.  What is it?  What does it all mean?  This crash course on feed labels should help shed…
Continue A while back I wrote… 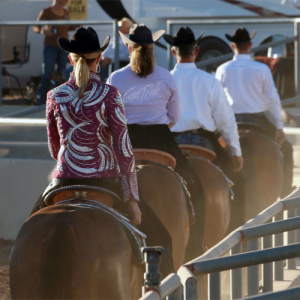 During the decades that I owned horses, I had a fantasy of horses in my grandkids lives.  However real life interfered long before my grandson appeared on the scene.  Since I no longer have horses  my grandson did not get to meet horses, and I could not just pop him up on a trusted horse.

But now I have a big enough house to have a spare bedroom, so my son, Tally, and grandson, Will, can stay overnight, and since they live just a few…

The past three weeks I have been sick, again.  My digestive system has decided it does not like food and that it does not particularly want to digest food.  Between constant nausea and diarrhea that will not quit permanently, I have spent most of my time collapsed in my bed.  However, after one week in bed I ended up with horrible back spasms, so I have been trying to ride as much as possible, at a walk since I am so darn weak.  I am hoping…

A Lesson about Squeamishness and a Donkey.

Look, it’s a selfie of me mucking last week. I like to get an early start in the summer. Over six hundred blog posts about this horse/life, and no one ever asks me for fashion tips. I wonder why?

I wasn’t always this sophisticated. I remember when I was maybe fifteen; it was morning and I was standing out waiting for the school bus. I…