I've been busy and so have not been able to post as often as I'd like. Fighting bad guys and stuff like that. So I figured I'd make up for it and give you guys the first look at my latest creation (muahahaha). It's another animated short movie, set in the make believe news broadcast world covering the World Equestrian Games.

I hope you enjoy it as much, or more, than a previous one shown on my blog called…

Well, after a mammoth 8 hour drive in the new truck we arrived safely and everyone travelled well. Wentworth is in the western district of New South Wales, so a fair way from Inman Valley. My wife ,Kate, has a family connection with the area and she was the first Miss Wentworth showgirl. As this was the 20th anniversary of that milestone in her life we felt duty bound to return for the show ( plus the mother in law said we had to!). I took two Showjumpers and the kids took a pony each , plus…

This Week in Horse History - August 30th Through September 5th

August 31st, 1955 - Thoroughbred racehorse Swaps faced Nashua in a match race. The race was held at Washington Park. The race was held before a crowd of 35,262 racing fans. Swaps, suffering from a sore foot, lost to Nashua by six and a half lengths. Nashua would go on to be nominated as the 1955 Horse of the…

Enjoying the Horse's Gift, and Then Letting Go

I got to ride Mia twice this week, but, since Debbie wrenched her back badly, I didn't get a riding lesson. So I worked on things in my position that Debbie had been getting after me about, mostly making sure that my lower leg did not go too far back. Debbie DOES NOT like seeing the whole girth when I am riding, she wants my lower leg right…

Join Up – get your horse to catch you!

Have you ever gone into the paddock to catch your horse and your horse keeps running away from you?


Do you ever head to the paddock…

Some Folks Call Sculpture HorseSh*t, But This is the Real Thing 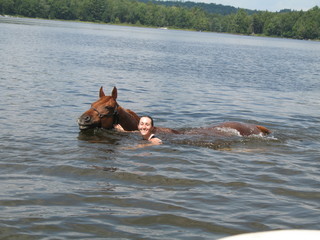 Develop the Partnership you have always dreamed for!

You can force horses to do many things, but forcing a horse to like and trust you is impossible. A horse…

Hello,
I have a 15-year old gelding – appaloosa/Clydesdale cross, Copper. My problem is that I am not confident enough to follow through with things that I ask him to do. This happens mainly when I ride him – he’s lazy and doesn't want to go, or doesn't want to go in the direction I want to go. That is partly because I don’t have a lot of experience with horses, but mostly because I saw Copper buck someone off that he didn't like, and I don’t want that to happen to me! I know that he…


My name is Samuel Price. I am an equestrian animal collage artist from San Francisco. I will be making my pilgrimage across the United States to bring my work to the largest horsing event in the World in just a few short weeks.
I would like to invite you to join me in what will be an event like no other. This show is hosted in Lexington, Kentucky and begins in late September. It is called the… Continue

As you might have guessed, I’m a very practical person. I learn by doing. Ultimately though, we all must learn by doing as there is no alternative and this is especially true with horses. I do hope that you enjoy watching my DVDs and reading my book but I have to tell you that unless you get out there and put them into practice, you will never know what sort of results you might get. I recently had a lovely email from a lady called…
Continue

A year or two ago I wrote this blog numbering the nights I spent in a hotel serving horse owners. It is not the end of August, 2010 yet and I have already exceeded this number. I am guessing that I will visit a Marriott hotel about 150 times this year. I have VERY exciting news for you! I have purchased a farm in
Wellington, Florida to be able to continue to give my clients and
horses the best possible training facility and "home away from home"… Continue

Video Book Trailer for Women Riders Who Could... and Did: Life Stories of Top Level Equestriennes

Check out this 3-Minute video book trailer. It'll give you a quick overview of all of the illustrious horsewomen in my book. Enjoy! from Karma Kitaj

Cider Shreds My Ego and Mia Heals It

Last Sunday's ride on Cider did not go very well. I have been trying the Wellep Lever Cheek snaffle on her, seeing if I could use the bit while my hands deteriorated in the heat. At first everything went well, I used the bit through two stretches of 18 days of highs over 90 F and on Sunday we were into the third extended stretch of heat and high humidity. Two weeks ago I noticed that Cider was not reacting as well to the bit. On Sunday she lost all patience with…

trouble picking my mares foot up

i have just bought a fell mare who has never been shod and is reluctant to pick her feet up.After 2 weeks with me I have managed to lift both back feet and the near fore, but no way will she pick the near fore up.I have tried reward with the other feet which worked and now she will pick these up without reward, but still the near fore remains planted.If I lean my weight against her she leans even harder against me and lifts her off fore as if to tell me there is a problem with the near but not… Continue

There was a… Continue

A great time had by all at the elegant Canadian Horse Racing Hall of Fame Induction Ceremony on Thursday, August 19th. I was very honoured to present the ring for Windfield's Lady Angela (Dam of Nearctic, Grand Dam of Northern Dancer) to Judith Taylor Mappin,…