Sending a Horse Out for Training, and Then He Comes Home

First, I admire and respect a lot of people who train horses.  Training horses can take a lot of bravery, knowledge and skill.  Trainers are IMPORTANT, good ones can clear up the confusion of the horse, show the horse how to move better, and train the horse to be obedient to the rider.  Good trainers can also humanely train a horse for many of the specialized games that people like to…

I know, I know, this is way overdue. We did a little cantering last year in the arena and a little the year before, but I never worked on it steadily enough to get a solid transition. I decided to canter a lot on trail this summer, and I did. We loved it. I figured once we got back in the arena, that it would be easy—wrong. Reality couldn’t be further from the truth. It was just as hard as ever to get him to canter.

I didn’t use the clicker on the…

Bull-headed, sometimes pig-headed: these are names that you might call an obstinate tomboy of a daughter. It wasn’t meant to be a compliment. Did you ever hear those names around your house?

I prefer the term hard headed. In 1970, Cat Stevens (then) put out my personal teen angst album, and it had a song entitled Hard Headed Woman. It was the first time I had heard the phrase used in a positive way:

“I’m looking for a hard headed woman, One who will make me do my…

The Benefits of Merino Wool and Back on Track Products

Hope everyone is enjoying the start of fall and getting ready for thanksgiving next weekend :) This week's blog is going to be focused on products made out of merino wool for riders, and Back on Track products for horses. It will show the relationship of products that are comfortable and beneficial for both riders and horses.

Firstly, merino wool is a material that comes from a specific kind of sheep called Merino sheep. These sheep are known for their coats because…

Our store is having a SHOW JACKET SALE! 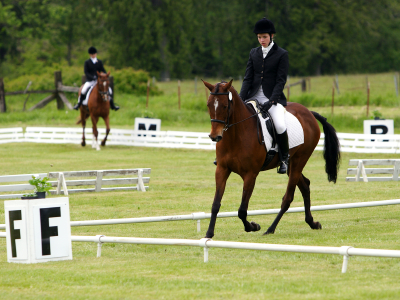 I reasoned the stressful part for the horses would be what’s going on inside the ring. Performing in close proximity to other horses while more gallop about in random directions. Humans and equipment…

I Ride at North Fork Again

Last weekend we took a LOOOONG trip, from here in the southern part of North Carolina to the panhandle of Maryland.  Cary had a show in Frederick, Md., which meant, of course, that I got a lesson at North Fork!  I like doing these once a year lessons at North Fork, after days of having to sit up in the car, sit up at the stamp show, getting up early, going out to eat and then driving around 20-30 minutes to North Fork I am TIRED.  My exhaustion causes my body to not work as…

Happy first day of fall, can't believe the summer is officially over already! Time to get you and your horse geared up for the fall and winter season. If you're looking for warmer riding pants and other equipment, come into Baker's and we will get you fully equipped for the cool Canadian weather. For the past two weeks, we have mentioned a bunch of information regarding different blankets for indoors and outdoors that we carry at Baker's. This week's blog is going to be…

It is autumn now. I should be writing poetic blogs about geese on the wing, abundant golden harvests, or maybe a symbolic essay about the seasons of life. I’m not in the mood.

Every day the sun comes up later, and goes down earlier.  The drought has drained my beautiful pond, my pasture has fried and died. Hay prices are simply impossible. Some of the elder barn residents are…

I dont know what to do. I want to help my fiances aunt to geld her two studs before anymore babies come along. She already cant afford to feed what she has and it looks like all her mares and donkey could possibly be bred. I cant afford to buy feed or pay for the surgeries since both are cryptos. Any ideas? I reached out to the sharing and caring group on facebook, but no response.

This year, I had to start my arena work a little early because I have sole custody of the dog. No more running straight out to the barn after work to ride before sunset for me. Well, September isn’t so bad. I have enough time to ride one horse on a quick trail ride. that horse is Cruiser. Two weeks ago, Cole began his arena work.

The first evening, I decided to try the outdoor arena. Usually, there are horses turned out in it in the evening, and… Continue

Fall is almost here and that does not mean that we stop riding.  Fall and winter are a great time to think about getting your horse into training/schooling. So give us a call to reserve your spot now.  970-260-2660

Clean Inside your Bubble

Whether we know it or not, we all walk around inside an energetic bubble.  I knew this long before the Natural Horsemanship folks coined the phrase, for those of us that are sensitive to the "vibes" both horses and other people give off, will feel it.  Much has been talked about, keep the horse outside of your bubble, but the fact is that we have to share the bubble to be able to get close to a horse, or we would not be able to get  closer than 10 feet!  It's more about sharing space and…

When you purchase a new pet, hooved or not, do you check references of the person you got them from?  Would you do a home visit with the potential pet and the person offering it?  If you decided you wanted an animal, visited the breeder facility would you walk away if their other animals were uncared for or under cared for?  I know I would. If they are selling animals every animal they have had better be in top condition.  I know of a person breeding reptiles that does not properly feed or…

This week's blog is a continuation to last week's blog on fall and winter blankets, but now specifically addressing the indoor blankets we carry at Baker's. With the cold months approaching, indoor blankets are great for layering and keeping your horse cozy while in their stalls. For horses with thin skin like Thoroughbreds, indoor blankets prevents your horse from shivering and from catching a cold. The three blankets that will be mentioned and described are: the Rambo…

We have a decently healthy herd here at Infinity Farm. We are eight species strong- mostly horses, but our fair share of ruminants as well.  Sometimes you can pick up a sick vibe in the herd before you can figure out which animal it is. It’s almost like sensing it out of the corner of your eye. This week it was a llama.

Her real name is Belle Starr, but she is a big boned girl and it’s hard to not refer to her as the Belly Llama. She had a bit of a digestive upset that I was able to…

Paying Attention to the details

Make sure you pay attention to the details of your horses. Check them for injuries daily. Check even closer if the have a sudden shift in behavior. I recently had a very active senior mare that was usually pushy and rushing to her feed decide to amble around and take frequent pauses.  After a few days I brought her up to the isolation pen and let her est in the full shade with hay and water for a couple of hours. I then began my inspection with her feet (we dont ride her so likely hood of a…

THE LANGUAGE OF CONFIDENCE

Re-adjusted my focus!! Cathy River's new blog post The Language of Confidence. Amazing what I've been saying to myself...#shift #mindset....

Cole is a Handful

I only had enough daylight to ride Cruise on trail. We went with my boyfriend and Starry. It was a very nice ride.

When I got back, I decided to try the outdoor arena with Cole. I haven’t ridden in there in over a year. It is huge and Cole gets very strange in it. I started by leading him until he settled down. When we got to the far end, he got wild and was bucking and rearing. He did this a number of times. I just sighed. This is what happened with him last year on the far end. I…

Transform your LIfe - get Connected

Transform - what does that word really mean?  It means change from one state to another.  I am constantly watching people ride, and in amazement I see the conflict between man and beast show itself in so many ways.  All of us try to achieve balance in our riding, but balance is emotional, spiritual, physical and mental.  If any one of those 4 elements are out of whack, the other 3 are also. We as humans have to grasp this connection, as the horses already know this.  If you are drawn to…