My niece's first ride of the summer Wednesday evening, my older niece, who recently came home from college, came out to ride.  Since I’m not riding Cruiser, yet, she got to ride Ranger.  It has been a couple years since she rode him, and last year, she only rode Cole once or twice.  Life got in the way, last summer.  She did admit to being a little nervous about riding Ranger.  He is a big horse, and he is… On the Saturday of Memorial Day weekend, I met Ellen at the barn.  After we did our chores, we decided to work with Dante.  Ellen is still a little nervous.  She is used to riding more experienced horses than Dante.  Dante hasn’t given her any…

Ellen and I arrived early at the barn.  We got the first 3 stalls cleaned, and then I decided to start Cruiser’s physical therapy walk while she cleaned Dante’s stall.  I led him to the back of the property.  As we turned to head towards the barn, I saw someone riding the Saddlebred burst out of the barn being chased by the trainer with a whip.  (They train very differently in the Saddlebred world.)  The Saddlebred was doing a high-stepping trot straight towards us. …

The beginning of a wonderful weekend

It was a wonderful weekend.  I thought it would be one of sadness.  It was last year, on Memorial Day weekend that my dad took a turn for the worse and he went into hospice.  I thought the memories would be haunting me, pulling me down.  Well, that wasn’t the case at all.  The weekend was just too perfect, so I enjoyed it—just as Dad would have wanted me to.

Friday evening, Kevin and I went on a ride with Cole and Starry.  It was very cool, and the horses were perky.  We had… Kevin and I went on an evening ride together on Starry and Cole Train.  It was on the hot side, and since it was Cole’s 4th consecutive day of trail riding, I thought he might be a little sluggish.  Wrong.  He was just right.  We did a lot of trotting and a little cantering—on the hard lead!  We walked all the way home to cool them off and enjoy each other’s…

Friday evening, I went for a ride by myself on Cole Train.  Since I was alone, I did a lot more cantering than when I am with other horses.  We did get the hard lead once on a sharp corner—that same corner that we were successful before.  He was doing great until we reached a sharp corner the other direction—and he switched.  Well, at least I had it for a little while.  We trotted a lot towards home, too.  The ride was about 5 miles round trip, and the…

Cole and I went with Kevin and Starry on a ride yesterday evening.  it was a very warm evening.  All went well on the way out.  We rode to the fallen tree—lots of fast trotting and a little cantering.  Kevin wanted to see if he could clear the tree off the trail or find a way around it.  He wouldn’t take my word for it—but as soon as he saw it he agreed.  We needed professional help for this one—chainsaw and glove.  It is covered with poison…

Kevin and I had a really nice ride last night.  it was cool, and there are still no bugs—we are enjoying it while we can.  We assumed that the tree that was blocking the trail was still there, so we turned at the river crossing before it and headed back towards home.  to make it a longer ride, we planned to pass home and go the other way for a while.

That made it a perfect day to work on trotting towards home.  we have regularly trotted towards home when we are far away, but…

First off—Dante’s cough has improved quite a bit.  He is still coughing, but not even close to how bad he was when he arrived.

Friday evening found me with Dante.  Since Cole just got shoes the day before, he got the day off.  Whenever they switch from shoeless to shoes or shoes to shoeless, we like to give them some time off to get used to the change.  I spent my extra time walking Dante around.  This was the first time that I had him all to… 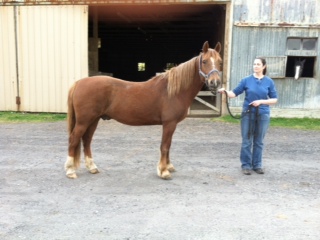 Dante is here, and he is lovely. More important than lovely—he is a real sweetheart. I got to the barn a couple hours after he did. Of course, Ellen was there when he arrived. The horse trailer wasn’t able to pull into the driveway due to its size and the fact that the street is all torn up and only one lane right now. He was unloaded right on the road, and she had…

Kevin and I took Cole and Starry out for a ride last night. It was in the 70s, so we figured they would be on the quiet side, but we were wrong. Both were feeling good. We started out with some fine trotting. They were energetic, but behaving, so I was able to talk Kevin into doing some cantering—with me in the lead. That meant I could go fast!

We have a favorite stretch for cantering that is so good that we even call it “the canter stretch.” Cole really felt like cantering, so it…