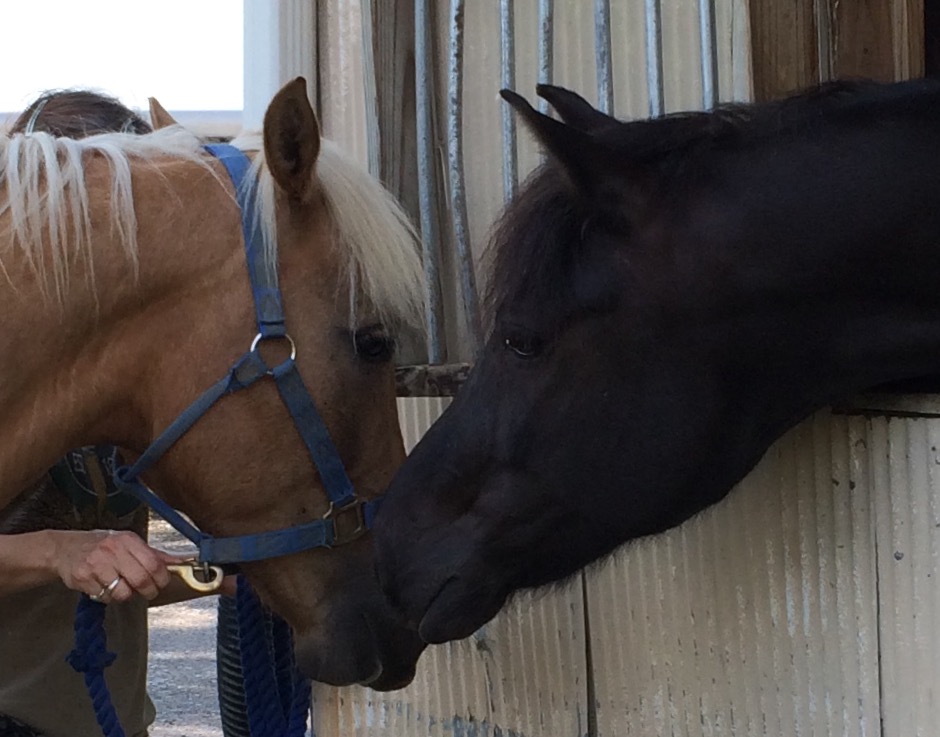 I decided to try taking MerryLegs down to the river in the evening all by myself.  No Ellen to give us moral support.  I had no problem getting him to the street.  As we were walking down the road, a couple cars went flying by.  It bothered him, and he jumped a little.  When I got to the head of the trail, he said he couldn’t enter the dark…

The Honeymoon is Over

The Honeymoon is Over

I knew that MerryLegs and I would have our “moments” as we got to know each other, but I was surprised about what the first moment would be.  I took him out of the barn to go for a walk on the driveway—heading for the back of the property.  After just a few steps, he decided he wasn’t going.

He has had some other incidents of refusing, and I was able to get him started back up by shifting his weight.  That wasn’t working, this time.  I…

We Went Down to the River...

On Saturday morning, I decided it was time to take a hike down the hill to the river with MerryLegs.  He was very, very excited.  As he walked down the hill, he looked left, right, left, right.  There was so much to see!  Actually, all there was to see was a lot of trees, but MerryLegs thought it was exciting. 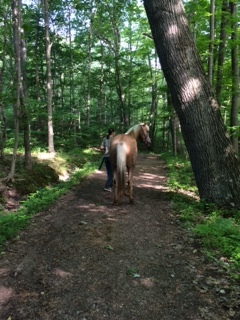 He did so well that when I got to the…

I planned to meet my new friend, Shari, to go for a trail ride.  We rode together about a month ago, and our horses did so well together, we wanted to try it again.  She keeps her horse a short distance down the street.

She has a chestnut National Show Horse named Bella, and she is simply beautiful, but she can be a handful.  We rode down the hill and got a good look at the river—it was too high to cross on a pony, and she didn’t mind just riding on the hill.  I told her how…

A Rainy Evening with the Horses Kevin and I were going to go for a ride.  I saddled up and went outside to wait for him.  Before he even got out, it started to drizzle, and he wimped out on me.  Cole and I left by ourselves.

As I’ve mentioned before, Cole hates rain as much as Kevin.  It was a light rain and a warm evening, so it didn’t bother me at all.  Each time I have ridden Cole in the… 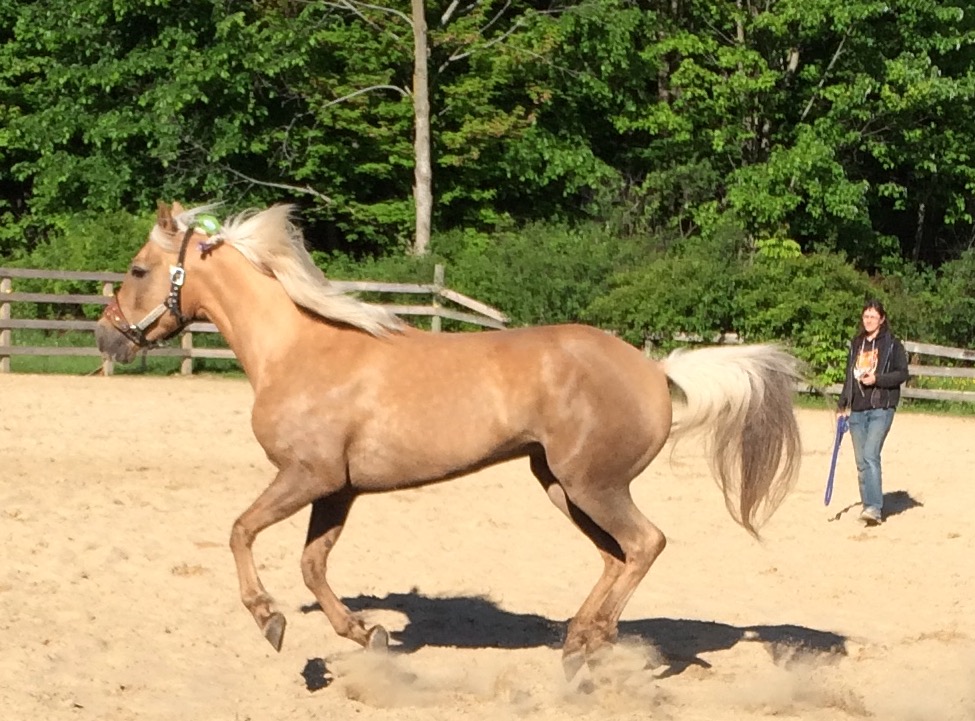 MerryLegs was only here for 2 days when we introduced him to clicker training.  I had a pocket full of carrot slivers and a ball to use as a target.  His indoctrination was the standard procedure—except none of us had a clicker with us.  Ellen and I both switched our horses to a tongue click, long ago.  I didn’t want to wait until I remembered to bring a… 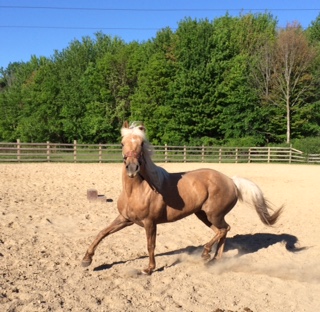 MerryLegs showed up in Cleveland last Thursday after a long journey from Manitoba, Canada.  Not surprisingly, he was a little keyed up the first few days.  I planned to just give him time to settle in and for me to get to know him.  Friday evening, I took him for a walk to the round pen.  He had to pass the outdoor arena where…

We thought he would be here on Tuesday, but that was changed to Wednesday because a Canadian holiday messed up their schedule.  Then, they called me and said it have to be Thursday.  There was another horse that they were shipping whose papers to get across the border expired, and they had to be renewed.  So, when Thursday arrived, I was expecting a phone call saying it would be Friday.  Well, I got the phone call, but this time they said he would be there between…

He's on his way

MerryLegs is on his way, and the shipper is going to call me when he crosses the state line.  I have marshalled all the forces, and they are all waiting for the call.  This is one exciting event.

Yesterday, Kevin put a note on the bulletin board for everyone to say “hello” to MerryLegs.  Of course, there was no MerryLegs, but Kevin put an old toy horse in the stall, instead.  He tricked everyone—they loved it, but probably not as much as they…

Our trails are fairly close to the street in places and fairly close to the river in others.  There is one spot that it is close to both.  It is so close the river that each year, the trail is washed out—leaving large rocks.  It usually takes months for the park to repair it, so Kevin created a trail that is right to the side of it where the river washed up a lot of sand.  It has small trees on the river side—that can hit your kneecaps if…

Soon as the weekend showed up, we plunged into the Arctic Circle.  Friday evening was so cold, that I couldn’t talk kevin into riding with me.  The river was too high to cross, so I planned to do a few trips with Cole on the hill.  He was one little bundle of energy.  When I got to the bottom, flat part of the hill, I hesitated to trot at the usual spot.  I wisely decided to shorten distance to the stopping spot.  When I did ask him to trot, he made a  huge…

I Slept on It

I Slept on It

The following morning, I sat up in bed and said, “I’m getting a new horse.” It was just that easy.

I took another deep breath and sat there,…

And the Trainer Says…

And the Trainer Says…

I sent out the email to MerryLegs’ trainer.  I told her how I liked a horse that wasn’t lazy and unmotivated.  This was my biggest concern.  His owner made me think he wasn’t, but she didn’t actually ride him.  Mingo was a very quiet, sleepy horse, and he drove me crazy.  For many people, he would have been the perfect horse.  My older niece simply adored him.  They were the perfect pair from the very first ride, and I am so glad I had him so she could…

Each time I go out to the barn, if Ellen isn’t there, I spend a little time with Dante doing spring tuning.  We are just reviewing the things what he knows to prepare him for trail riding.  For the first week, we played bus stop.  He remembered the game quite well.  It is where I take him to the end of the driveway and we wait for cars to pass.  If he stands still, it click and treat him.

Yes, this is good news. I finally got the results of the latest medical test, and it isn’t the C-word (and I don’t mean canter.) The problem is something very manageable, so that means life can go on. It is spring, and it is going to be a good one.

More good news—Kevin and I cross the river! Hurray! The first time was Friday night. Cole and Starry did great for their first trail ride of the year. They were both somewhat startled by a turkey running behind them, but…

I waited and waited to hear from MerryLegs’ farrier, with no response.  I told MerryLegs’ owner, and she sent an email to him to check his spam.  A few more days went by and nothing.

In the meantime, my health problem got more complicated.  My health wasn’t any different, but the test that would let us know what was going on couldn’t be completed and my doctor wasn’t sure of the next step.  He wanted to consult with a colleague—who turned out to be out…

It is so funny how something like just riding up and down a hill to a too-deep-to-cross river can be so satisfying in early spring and so unsatisfying later in the year.  The hill is thawed enough to ride on the whole thing.  The bottom is still icy/snowy, so we walked on that.  Once that thaws, we like to use that section to trot back and…

This is the most frustrating time of the year. The weather has warmed up, the river has thawed (though it is still very high) and we can’t even get down the hill. Our trail has turned into ice from us walking on it so much this winter. Since it doesn’t get much sun, it takes a long time to melt.

It is now light enough to ride after work. Last week, when the trail was still snow, I did get to ride Cole a few days on the hill. He was very excited the first…

I anxiously awaited more photos. She promised to send me some over the weekend. Her farrier was coming out to trim, and she would get them, then. When the photos finally came, they weren’t the best. There were, what appeared to be frost spots on the pictures. She claimed it was 28 degrees below zero. Wow, her farrier must be a tough guy. Our farrier has cancelled on us when the temperatures were below zero. What does 28 below feel like? She said it had gotten as…

First, I have to tell you about me and telephones.  I just can’t join this world where everyone seems to be attached to their smart telephone.  My main phone is my land line.  Believe it or not, my home has the old fashioned rotary phones that came with the house.  I am certain they are older than I am.  The voice quality is great, and my…