The Risks of Getting an New Horse

The Risks of Getting an New Horse

Choosing a new horse, whether you buy him or he is given to you, is a very risky endeavor. All the riskier when you are like us, and plan to get a horse for keeps. Ellen and I are just not the kind of people who can pass our animals on to an unknown future. It doesn’t take very long, and we are so attached to our animals that we can’t let them go down an uncertain path. So, when we choose, we choose carefully.

Who am I kidding. We were all…

Now, just because a horse is free, doesn’t mean taking him is a smart thing. I've done this free horse thing before. My first horse, a Morgan named Brandy, was given to me by my aunt. I had ridden him a number of times when I was a kid--mostly in the arena, and I thought I knew what I was getting into. My aunt sure knew what I was getting into, but she wanted to get rid of an expense.

He was way, way too much horse for someone of my little experience for trail…

Things on my mind

Things on my mind

This year has been a tough one for me, medically.   Don’t worry, yet, there may be nothing wrong with me.  No reason to panic until it is time to panic.  I just had a medical screening test that had positive results, and there have been complications with getting to the bottom of it.

I know that I shouldn’t get too worked up about it, and most of the time, I was doing fine—but I am still human.  My imagination sometimes gets the…

A New Adventure Begins I have been looking for a new horse since last spring when Cruiser flew off to greener pastures. I would have liked another Morab, since Cruiser and Cole turned out to be such wonderful horses, but that didn’t seem possible. The Great Recession seemed to have wiped out the Morab breeders. I found plenty of older Morabs from before the recession, but I didn’t want in older horse. My second choice was a Morgan. It was a close second. After experiencing Cole who is mostly…

Playtime in the Arena 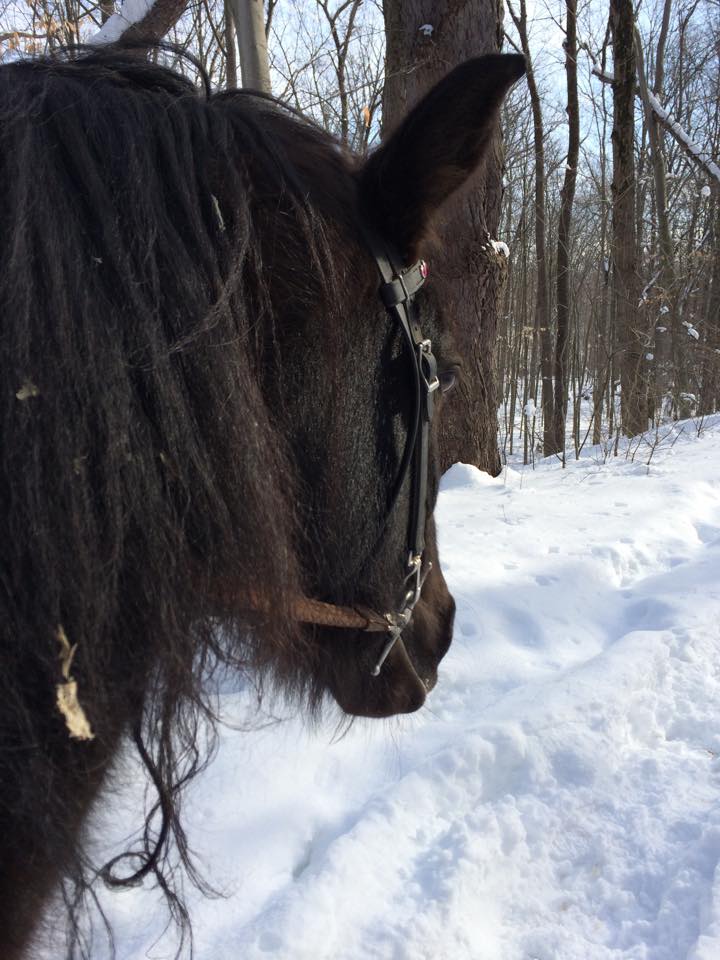 Playtime in the Arena

It was a really, chilly night last night. When I got to the barn, it was only 5 degrees—warmer inside, of course. It was warm enough to ride, but Cole had that look in his eyes—that crazy, intense look he gets in the cold weather. I turned him out to play in the indoor arena, instead.

With very little urging from me, he… Continue

Like much of the country, we have been getting lousy weather.  What can we expect for winter in Cleveland?  Most days have been cold—very, very cold.  We have had plenty of nights on either side of zero—and that is…

Cole and I have been working on our ground work every time I see him.  He is now doing all the simple exercises very easily.  It was time to move on a challenging exercise—shoulder-in.…

I rode Cole in the indoor arena for a half hour.  The thermometer said it was only 20 degrees—which isn’t bad for me, but it turned Cole into a frisky colt.  He was like riding a stick of TNT—very volatile.  We…

For those who have not been following my adventures with Cole Train from the beginning, let me bring you up to date.  When I got Cole, he was an untrained 4-year-old.  He was halter broken,…

Trying to work in the Arena

Trying to work in the Arena

Since Ellen and I took so much vacation time in November and December, combined with conquering the loop in the back of the property, I have never ridden so little in an indoor arena since the years when we didn’t have one.  This is a good thing—and a bad thing.  It’s good that I have been able to ride…

It was rainy, cold and dark.  It was time to try the indoor arena.