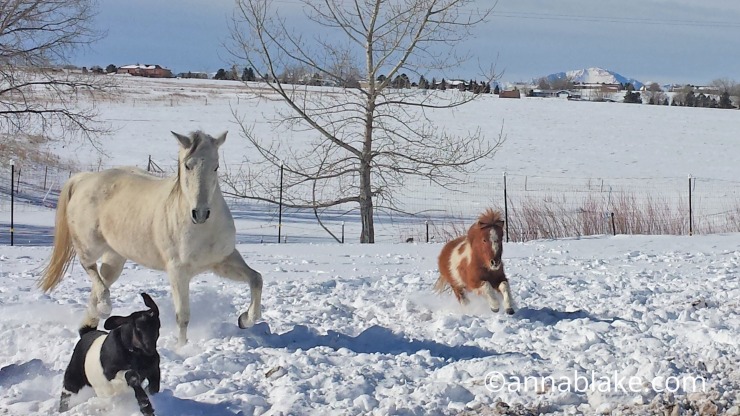 It was a fib; just the first part of the annual bait-and-switch scam that Mother Nature pulls to make riders even battier than usual. It starts with a couple of sweatshirt days, just enough to thaw your icy resolve, and then WHACK! Slapped down by a spring storm; this one started slow but in the end we had four days of wind and twenty inches of snow. The local news posted school closings, but for some of us, snow day means the very opposite of reading and sipping hot cocoa. It means game-on. Our farm lost power outside, the well only worked intermittently, and the snow was deep enough that I tripped and fell, dumping a bucket of water in my boot as I landed in a snowdrift. On the high side, I remembered to muffle my howl and saved myself from frozen lungs as well.

Shame on you, Mother Nature. Really. Where’s the challenge in upending old gray mares like me? No one understands the need for comic relief more than us… but it’s an election year, surely there’s someone more deserving of you lousy sense of humor? Instead, we limp and try to find some dry gloves and wonder if we’ve forgotten how to ride.

One more time, horses manage this better. First, they don’t have creative thought, so if they fall, they don’t shake an angry fist at an imaginary character. Even if a snow day means stall rest, once they get out, they barely lose a stride. (See photo: You’d hate to let the goat win.)

This week’s message: Lay down the guilt. No one else is riding much either.

Between holiday residue, erratic weather, and polar darkness, it’s hard to ride consistently. Here’s the crazy thing: we have to go slow because the horses are a bit out of shape from standing around in blizzards eating all day, but at the same time, a huge amount of progress can happen. It’s counter-intuitive; no one suffers and horses actually improve between rides. A horse’s mental superpower is memory and with senses so much sharper than ours, they remember each fine detail. Do you let them show you?

In winter lessons especially, there’s a lower expectation so the ride starts without rushing. Hopefully we pay even more attention to warming up and we may do more work at the walk, so sweating and muscle strain is minimized. Not to mention, the rider isn’t so finely tuned either. It almost feels like being demoted.

Then right in the middle of a seemingly aimless ride, when no one is trying too hard, your horse offers you something. And things are slow enough that you notice it. Wait. Let him engage the idea himself–dang, he’s trying–reward him, and then see what he offers next. It isn’t perfect, but the seed of better contact, or shoulder in, or whatever, has been offered once more. Good boy, and the last thing a horse needs now is soul-killing repetition. If you’re in a lesson with me, I’ll ask you dismount and release him. Nothing impacts a horse more than being rewarded so clearly; he remembers that last thing in equine technicolor. Not to mention it’s my claim for fabulous wealth and fame–I cheat people out of the last eleven minutes of their hour.

Let his good try be enough and leave both of you to simmer on it. Remember the ride as much as he does, expect ease and grace, and then see what he offers you at the next ride. Do your training methods empower your horse or shut him down?

So we excitedly plan for the next lesson…and Mother Nature cracks another bad joke. By the time we meet again, it’s possible you’ve forgotten how the last ride ended. I hope I’ll remember, but know for a fact that your horse does. He remembers every kindness as much as every cruelty. Before you lament lost time, give him time to show you what he remembers.

Some trainers believe that any less than riding six days a week is a fail. That training a horse is like boot camp; aching muscles and blind repetition is the only path to learning for both of you. Suffering = Improvement, and art be damned. If the horse has a break, he’ll somehow de-materialize and all that discipline will be lost, leaving you at square one again. Hogwash. Think about it; the biggest challenge most riders face is retraining some old habit their horse has…that he’s remembered clearly for years.

What if this is the real thing we don’t trust about horses? What if it’s their intellect that we doubt most? Do years of being treated as if they aren’t capable of doing their job wear them down? I notice it does with women.

As a riding instructor, it’s my job to chip away at the things that separate a horse and rider from each other, while keeping an eye on the big picture. In the recent lessons, I’ve been gobsmacked at the effort the horses have all made and the between-lesson learning. At the same time, I’ve gotten a trio of emails letting me know about similar successes. This stuff works. Period.

And as miserable as winter can feel, the real gift in this season to see how much horses retain and progress, even as we are venting about weather and cold bones. Let this time of doing less and getting more remind you how smart horses are. And no worries; go slow and you’ll catch up in no time.