FROM ORDINARY TO EXTRAORDINARY

Every April in the UK the world stops for The Grand National Steeplechase at Aintree. It is the richest race of the year with the incredible prize money of £900.000. The winner immediately becomes front page news on every national newspaper and will still feature in quiz questions round the country twenty years afterwards!

I was brought up with the history of the Grand National and those famous Aintree fences, Beechers Brook, The Chair and The Canal Turn…..1954 The Queen’s horse Devon Loch, ridden by legendary writer to be Dick Francis, appears to jump an imaginary road and falls just yards from the winning post with the race at his mercy…..1947 Irish horse Caughoo wins so easily in the foggy conditions that the jockey is accused of hiding behind a fence and just joining in for the second circuit!…..1981 Tears, tears and more tears as Aldaniti comes back from a career threatening injury to win, ridden by Bob Champion who beat major cancer to ride him.

WE WERE WRONG ABOUT HER

Last week there was a 100 to 1 winner, Mon Mome, trained by a female trainer for only the second time in history, Venetia Williams. Not only does this give all long shots and all female trainers hope but there is a direct connection with my childhood. Venetia’s first proper pony was Rasper, sold to her family by my father, Dick Micklem. However Venetia was nervous and thought unlikely to do much with her riding so my brother Charlie, who had originally produced Rasper, was engaged to give the pony a few more ‘manners’.

Not only did Venetia grow up to be a very effective rider but she was so courageous that she became a jockey, and subsequently joined the handful of female jockeys to have actually ridden in the Grand National. We were WRONG about Venetia’s talent and potential, we were WRONG about Mon Mome’s ability, and on a daily basis we are WRONG about the possibilities of so many riders and horses. We all have sparks of possibility and lucky the person with the right support, encouragement and guidance to make the most of their lives….to take us from ordinary to extraordinary.


THEY WERE WRONG ABOUT THE BRIDLE

Spotting potential is not a gift we all possess. It is often easier to be negative rather than positive, especially when being positive means going against perceived opinion in support of something that breaks the mould. The history of my bridle, the Micklem Multibridle, is a good example of this. I have been using it for over eleven years now and it is even featured throughout my best selling manual, the DK Complete Horse Riding Manual, published in 2003. However it took further years of rejection after the book came out before Tom MacGuinness, owner of Horseware, the famous Irish rug manufacturer, saw the results and immediately realised it was a winner. Like me he believed that we have just accepted the standard design of bridles and nosebands for too long and the time had come for an alternative approach.

His faith in the product was immediately rewarded when the Micklem Multibridle was the winner of the prestigious innovation award at BETA International in 2008 and it was also taken on as an exclusive product with Dover saddlery in North America. The response from trainers and riders has been fantastic with high praise from Olympic riders and coaches, such as Karen O’Connor and John Ledinham….and high praise from the racing world.

So it is very likely that one day soon a Micklem bridle will go round the Grand National course, which would give me such huge pleasure. One of the main reasons why the racing world and event riders like the bridle is that there are clips provided to link the bit and the front nose piece together if required. (See attached photograph.) With a normal rein contact they have no effect, but when the rein contact gets stronger, which often happens when cantering fresh event horses and racehorses, some of the pressure is taken on the nose instead of the tongue and bars of the mouth.

This can make a huge difference as so many horses hate strong pressure on the tongue, and it is the biggest reason for horses putting the tongue over the bit. As a result horses have their tongues tied down, or alternatively one of various gadgets are used to stop them putting the tongue over the bit…most of which do nothing to solve the root problem. The exception to this is the Australian racing noseband, however this pulls the headpiece forward into the ears and can cause head flicking and shaking.

I use these clips automatically with novice riders and young horses as an insurance against any sudden pulls on the mouth. A pull like this can be very painful to the horse, as the thin covering of tissue on the knife shaped bars of the mouth is easily split and the bone bruised. So they are also great to use if there is any likelihood of a rider getting left behind when jumping.

Of course you don’t have to use the bridle with the clips and yet your horse will still be more comfortable. This is because of the padded headpiece, that has no need for a horrible narrow noseband strap underneath, and the way it avoids both the protruding molar teeth of the upper jaw and the exit point of the facial nerves, which tend to get squashed with standard cavesson and flash nosebands. Without question the Micklem Multibridle makes horses more comfortable…..and more comfortable horses are happier and easier to train

It’s main use is as a bridle…..a bridle with a built in dropped noseband. The really important first step is to fit the bridle properly, placing the horizontal part of the front nose piece high enough. It needs to be just above the fragile nose bones approximately 3 to 4 inches higher than the corners of the mouth, with the cheek piece of the bridle running behind and just below the protruding cheek bone. Then the two back straps are buckled up so they are not loose or tight but simply flush to the skin….with no cranked up locking shut of the jaws. This is another reason why sensitive racehorses like it…and anything that can give a winning edge has to be valuable.

My great uncle was leading in the Grand National two fences from home when his reins broke and that ended his challenge for immortality. One of the greatest jockeys of all time, Fred Winter, got a better result when he won France’s top steeplechase riding Mandarin despite the bit breaking two fences out! I have often thought of this and wondered if a type of bitless bridle could be used in racing. At the moment it is not allowed under the rules of racing but the Micklem Multibridle can also be used as an extremely effective bitless bridle.... so who knows what may happen in the future. I will explain more about this next time and also about it’s use as a great lunge cavesson. It seems too good to be true, but it’s not…it is truly extraordinary. Happy Days, William 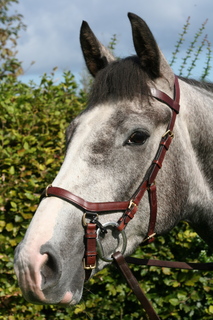 Comment by William Micklem on April 16, 2009 at 1:25am
Thanks for taking the time to say this...it is appreciated,,,we have also just brought out a competition version without the lungeing ring and bitless attachments as there is an obvious demand for this now in all the disciplines...including pure dressage as the various rule books include it as approved. This is heartening. William

Comment by Sarah at HorseJobs.ca on April 15, 2009 at 10:10pm
Congratulations on the BETA award William. That is indeed fantastic news.

Comment by William Micklem on April 15, 2009 at 1:34am
He was once favourite for the Welsh Grand National so you were wise...William

Comment by Sarah at HorseJobs.ca on April 14, 2009 at 11:01pm
Can you believe that I was one of the mad buggers who actually put some of my hard earned cash down on Mon Mome to win??
Pity I only bet a pound! :)