Welcome to this week’s slightly earlier edition of Equine Science News – I’m off to watch the dressage and show jumping competition Equita’Lyon in France this weekend and am flying to Geneva early Friday morning, but wanted to make sure that this week’s latest equine science news was still delivered to you all! So this blog post I’ll be chatting to you about laminitis, strangles and bitless bridles.

First a new study has been launched by researchers at Rutgers University, New Jersey, to see whether microbes might play a bigger role in laminitis than previously thought. Horses that suffer with chronic laminitis often have periods in between their severe hoof inflammation where they are relatively healthy. 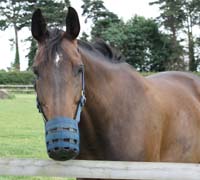 The scientists will collect tissue samples from healthy horses and those with chronic laminitis and compare them to see the role that microbes might play in this debilitating condition. Sadly for the horse’s enrolled in the study, any findings will come too late – the group will be using horses for whom the prognosis is not good. All laminitic horses participating in the study will be humanely euthanised at the end of the investigation and the researchers are therefore looking for equine-participants who have already been recommended for euthanasia by their own veterinarian.

Across the ocean, a breakthrough has been made in the fight against strangles. A team from the Swedish University of Agricultural Sciences have developed a vaccine for the contagious disease caused by the bacterium Streptococcus equi.

The new vaccine, which is proving to be highly effective, is based on pure proteins and may even inspire the treatment of streptococcal infections in humans. Until now, the only vaccine that is used relies on live bacteria and there are several side effects – the vaccine is not regarded as completely safe or effective.

Tests on the Swedish vaccine have so far shown no side effects and had a high success rate of preventing strangles. There is hope that their work will mean that a new strangles vaccine will be available on the market shortly.

Bitless bridles are becoming more commonly used and accepted within many equestrianism but most owners still prefer to use the more traditional bit to control their horse when being ridden.

Now the EquineScienceUpdate blog has posted a great account of some studies comparing bitless and bitted bridles. The blog post is very extensive, so I’ll just briefly recount the findings here and then anyone wanting to know more can check out the article here.

Researchers from Australia compared horses being ridden in “crossunder bitless bridles” with horses wearing a bridle and standard Fulmer snaffle both in basic ridden training and also long-reining. The results were mixed – horses wearing the bitless bridle showed more headshaking when being ridden, but horses being long-reined wearing bits had a higher heart rate and took longer to respond to the “halt” command.

A second experiment involved experienced instructors riding a dressage test on a horse in both a bitted and bitless bridle – the study found that the dressage marks improved when the horse was ridden without the bit and that the horses also seemed happier.

The results are described in more detail here, but the results are certainly interesting (if not conclusive enough yet) and could influence the way certain disciplines view bitless bridles.

Now it’s time for this week’s trivia question – how much do you know about equine feet?

See if you got the right answer, by visiting my profile page here.

Comment by Valentina Escobar-Gonzalez on November 1, 2009 at 9:34pm
Yay! I was right. Now: the question of the hour is, if you take Biotin supplements, does that effect of growth?
-Valentina
My Funny Horse Blog
My Website