FEEL THE RIVER IN YOUR HORSE

As I travel the world working with people and horses there are significant cultural differences between the various countries. However, it is always true that wherever I go - people are people and horses are horses. But then again there is the very real challenge of how often the time needed for translation of verbal languages takes us “out of the moment” with the horses.

Of course, that delay between a rider hearing what I have to say - and then translating my English into their own language - and then applying what was said - will often result in the rider being “too late” because now the horse is doing something completely different. So, sometimes verbal translations can be limiting when trying to convey a message of timing and feel.

For instance, I often see students looking at me with that “Deer in the headlights” look of confusion when I say to them “you don’t tell a horse where to go by pulling on the reins in the direction you want to go – you tell a horse where to go by using your legs and reins to block off the directions that you don’t want to go.” So when words get in the way I find that the best way to help someone understand what feel with a horse is all about is to have them play the role of being the horse. And my favourite way to do this is to ground drive people like a horse.

So I ask for 4 volunteers to come up to “be a horse”. As you can see by this photo taken from a recent clinic in Holland, I have the 4 participants represeant the 4 stages of a horse. But I don’t tell them they are a horse – I tell them they are to “be the river”. 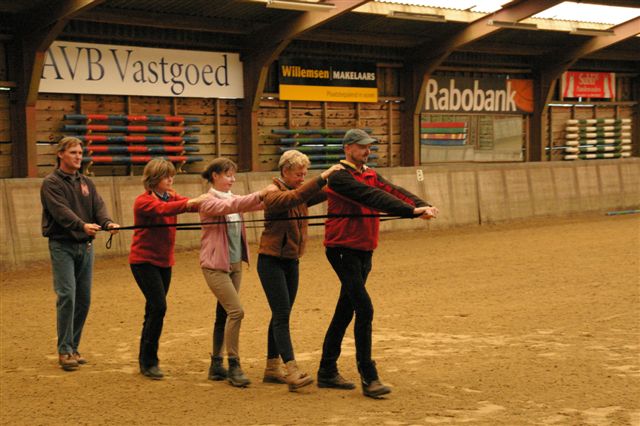 As I ask the participants to put their hands on top of the shoulders of the person in front of them I give them some very simple instruction. First, close your eyes. You do not know where you are going – but like water you will follow the path of least resistance. The long lines running down the sides of your body are like the banks of the river. If you feel an opening somewhere let your body flow or spill into it – but where you feel a boundary or blocking energy do not push through it – try to go around it looking for a path of less resistance.

As Stijn is pushed forward by the 3 women behind him (how appropriate is that!?) he feels his hands “plug in” to the driving lines held in my hands. We are ALL connected as ONE moving flow of energy.

If you look closely at the photo you’ll notice that I have moved my left leg and my left shoulder forward just a little. Now look at each person who represents the moving parts of the horse and you’ll notice that despite having their eyes closed they are also all moving their left legs and shoulders forward in unison. Once we have a horse forward into our hands then we do not need to pull where we want to go – we simply release some of the blocking energy of where not to go. As I have released my left leg and shoulder forward this “give” or release is rippling forward through my horse. All 4 of these people have their eyes closed and they are simply responding to what they feel as blocking energy of where not to go and drawing energy of where they are being released to go.

Of course, if you’re reading these words and struggling to understand this concept of how your horse moves like water in a river then perhaps you should gather some friends and try this exercise in feel. Your friends can tell you the difference between what they feel against their bodies and in their hands as blocking energy instead of pulling and they can help you find your way to telling the river in your horse where to go with boundaries of where not to go so that we can all learn to be “light” with our horses.

Until next time, may the horse be with you and may the river run through you! 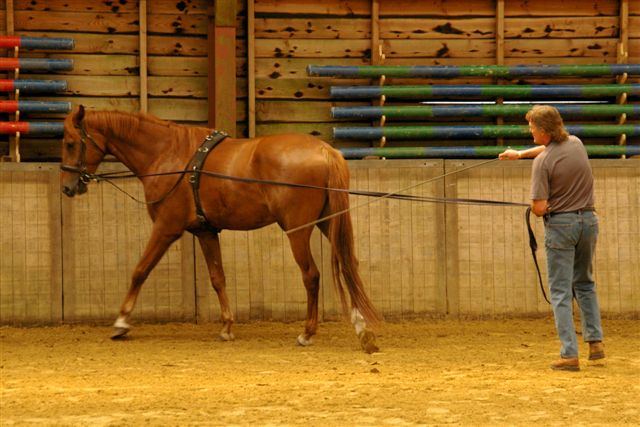 Comment by Jackie Cochran on May 28, 2009 at 4:30pm
If I do the start of the turn with my core and seat, I find that if I do not advance my INSIDE hand also (just not as much), I will end up giving the direct rein of opposition on the inside rein, and slow down my horse and lose impulse anyway. It really helps me that I go with the philosophy that my hands belong to the horse's mouth and not vice-versa, so I am super careful not to accidently give unwanted commands that I do not realize that I'm giving..

Comment by Jackie Cochran on May 25, 2009 at 8:18am
Very good.
I have long believed that the best way to turn is to adance the outside hand. The horse does not feel blocked and maintains speed.

Comment by Laura on May 24, 2009 at 1:15pm
Love this exercise - I'm going to try it with my barn friends. My mentors have taught me this principle (blocking energy in order to "steer") before but the way you've described it here was refreshing. Thanks!

Comment by Barbara F. on May 24, 2009 at 12:21pm
What fantastic imagery, and a great exercise! I often think how much riders (myself included) ask our horses to do something and then inadvertently block them from doing it!