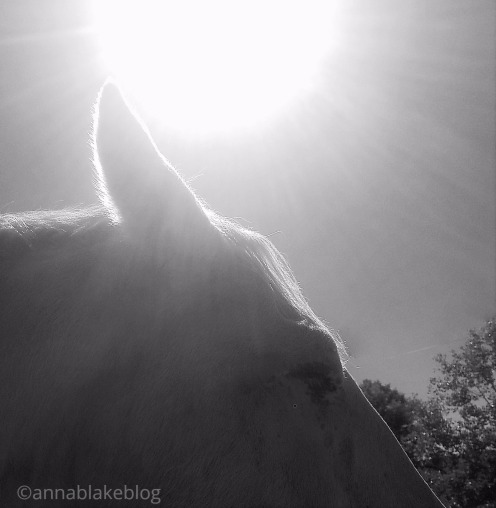 It’s deep fall here on our farm. Most of the leaves are gone; Canada geese are on the wing. Each morning there’s a thin shell of ice on the water tanks. Local horse-people know the season change in Colorado can be extreme. The barometer goes nuts for a few weeks, temperatures dance wildly, and we keep a special eye on the elders. My Grandfather Horse usually has a veterinary emergency every fall, but not this year.

Trigger warning: The peaceful passing of a well-loved horse.

Our story started with a foolish decision: I bought a colt who wouldn’t let me touch him. In my lifetime of horses, I have no explanation for why this scruffy Appaloosa colt hooked me as deep and true as he did. Breed shows, trail, reining, jumping, and finally dressage. We had a good thirty-year run; all of his life and half of mine. Maybe it was giving him such an infinite name; there was no telling where my spirit stopped and his began.

The Grandfather Horse had a rough summer. Chronic arthritis controlled his movements–even on warm days. His knees wobbled and even collapsed on him sometimes. He had a collection of tumors; the largest one had grown to ten inches. I asked a kind vet for a consult; I didn’t need a diagnosis. It isn’t a crime to get old.

I was told that the thing most likely to kill him wasn’t even the condition that caused him the most daily pain. The management options were exhausted. Of the three possible outcomes, two were brutal. The vet left and I languished in selfish thoughts, intense memories, and the inability to verbalize anything.

Then I practiced saying the words out loud, like a spoonful of poison a day. A week later I called for the appointment to euthanize Spirit. I got some of the words out.

I chose a day at the end of September; far enough off that I could torture myself with doubt, screw up my courage, and say a last, best, thank you. For half of my life, he was my only constant. I wanted to hold steady for him now.

Then he made it easier for me. Don’t you hate that? There was a strange incident that left him disoriented and out of balance. After that day, his eyes were dimmer but we doddered on.

Thirty years; closer than kin. Readers and clients sometimes lament that they wish, for the sake of their horses, they’d known me thirty years ago. Spirit would be the first to tell you I was no prize. It was always him.

As our horses age, we continually lower the bar when thinking about their quality of life. We know they’re flight animals but we mitigate their lameness with supplements and injections. We want to believe they don’t miss running. As teeth are lost, we make mush for creatures designed to graze 24/7. We keep them safe from younger, stronger horses in turnout. When they can’t move enough to stay warm in winter, there are blankets. Eventually, the bar got so low that he was a shadow of the beautiful gelding who changed my life.

Looking at the Grandfather Horse, well, Nature would have taken him a decade ago. Truth: I became more afraid of a painful midnight blizzard emergency than I was of losing him. There were no better days ahead. I knew he’d given me everything he had, and I’d done the same; now there was only this one final kindness.

The day before our appointment, I stayed in the pen with Spirit and our family horses. It was a golden day, Spirit reeked of Showsheen, and the curry was as warm as his old heart when I finished. I took hundreds of photos. He looked miserable in most of them; his eyes were almost closed and he only moved a few steps all day. But we were all together.

Some of you knew him, and some of you befriended him here and through Stable Relation. Thank you for sharing my Grandfather Horse with me. There’s nothing special about death. What matters is how we live–celebrate that.

On the last morning, the family horses had breakfast together. Spirit wandered away from the herd, stood in the sun, and dozed. I stayed close, not that he noticed, and kept my breath matched with his, treasuring each inhale.

We’ve been thrown some curve balls over the years, but I won’t ever regret a single moment with this horse. Not even this one.

Spirit had no fear of vets or needles; I didn’t need to hold him. So we shared an apple, in the way that we always did. I bit off a piece, sweet in my mouth, and gave it to him. The vet began the procedure and an instant later, Spirit was free. My first feeling was relief. It went well. No fear or suffering. I felt like I’d saved him.

“Let the pain wash over you. Don’t fight it, feel it. Let your tears free. Cry without judgment; it’s just a different kind of breathing.” I wrote that years ago; horses taught me to believe in emotional honesty.

I brought the family herd into the pen after the vet left. Nubè was curious and quiet, while Clara was frightened, flagging her tail and galloping arcs around him. Edgar and Bhim were stoic. Eventually, everyone made their peace. Little Arthur, Spirit’s goat, stayed longest. He laid down by Spirit’s back leg, as I sat by his head, holding vigil until the truck came for his body.

A cut this deep has a purity about it.

I’m sorry to share this; there’s no shortage of sad news already. My voice has an aching squeak; it’s taken a month to write this eulogy. Everything I say sounds trite and superficial. The words feel insignificant, like an out-of-focus snapshot. I’ll live in the shadow of this horse for the rest of my life. If I’m lucky.

Personally, I’m not a fan of the Rainbow Bridge. If it gives you comfort for loss, take it to heart. As for me, I hate the idea of all my animals waiting for me. Besides, I think horses might be Buddhist. I hope he’s gamboling through a pasture, on brand new wobbly legs, catching the eye of another horse crazy girl who has a lot to learn. I’d wish him another life just like this one.

Mostly, I’m overwhelmed with bittersweet gratitude. I knew he never belonged to me. He was always part of something bigger than my tiny, conflicted life. I had to leave my puny-sad-self behind to keep up with him. It was the best trade of my life.

Go the distance.
Do it with grace or do it ugly,
because some days
that’s what your best looks like.

It only matters
that you go the full heart distance.

Yes, they teach us humanity somehow...and we owe them a debt. The fact that your memory of your old gelding is so strong is a testament, a legacy, to all he meant to you. You were lucky to have him. Thanks, Jackie.

I feel your sorrow.

Many years ago I had to put my first horse down, 33 years old and his first case of colic, impacted.

I still miss my old horse, he taught me everything, how to be a good horseperson, wife, friend, and parent.

These geldings can sure teach us how to be human, can't they?

Farewell, Spirit, Grandfather Horse, you gave us all a great gift through your teachings to Anna.  Thank you.