I then went back to the street.  He did better, but he only made it to the next house—but h got there 3 times.  Still, we had positive moments that we could click for.  I simply couldn’t get him back into the arena door to get him to his stall, so I had Kevin lead Starry ahead of us.  He willingly followed Starry, but when I tried it alone, he refused, again.  We brought Starry back out, and practiced it a number of times—clicking for each success, and then he finally was able to do it on his own.

The next day, I had my sister to help.  I took him out the barn door that leads outside instead of the arena, and that went well, as always.  Next step—leading to the loop.  He went through his whole refusal routine for Ellen to see.  Then, she stood behind him and gently waved her arms.  That worked way better than tapping with the whip.  He went forward and got clicked.  That’s how we managed him whenever he got sticky, and we no longer had any serious problem.  He walked 5 laps on the loop.  I don’t know how much was my training from the night before and how much was Ellen’s influence.  Whatever, I’ll take it.

We then headed for the street.  Ellen was able to gently urge him whenever he paused, and we made it to the trail.  He stopped suddenly when he heard a saw.  We knew without looking that it must be our friend from down the street, Dave, sawing the tree that was partially blocking the trail.  As soon as he saw us, he stopped, of course.  MerryLegs then happily entered the trail.

He was perfect leading down the hill, but then that is something he seems to enjoy.  I do believe I have a horse that is going to love trail riding.  He walked down the muddy river bank, stepped through the debris pile and walked towards the water.  He then stepped to the water and stuck his nose in it.  Click time.  While he stood there, one hoof went into the water—click.  Soon, another one followed.  Click.  More clicks.  I led him parallel to the shore, and his feet stepped into the water.  Of course he got clicks for this.  Three times I led him along and all of his feet stepped in.  The water was only a few inches deep on the edge, and he was stepping on a dirt, shale mix, so it didn’t feel scary, but that doesn’t matter.  This was all wonderful.  It was time to go home.

Next day, it was time to repeat the process.  We started out by trying to lead him out the barn door that goes into the arena.  We took him out of his stall and had him stand.  Whenever he took a step forward, he got clicked.  It only took a couple of minutes, and we were out.  We went directly outside and to the loop.  After a couple of uneventful laps, we headed for the street.  He walked his best, yet, but he did jump when a large, loud truck went by.  He seems to be fine with the typical car, but the odd vehicles are a little tougher.

For the first time, ever, he stepped right to the trail without hesitation.  There was Dave, again, trying to figure out how to get rid of a bigger log on the trail.  We marched down the hill, right to the river.  After some nose wiggles in the water, I walked him parallel to the shore, again, and he got his feet wet.  He seemed so mellow by this.  I stopped, looked at the water and contemplated.  If I get my feet wet, will MerryLegs make it worthwhile?  I had my tennis shoes on—not my riding boots, but I still had to ride Cole, and I didn’t have any dry socks or jeans.  It was plenty warm.

I took a deep breath and told Ellen, “I’m going in.” 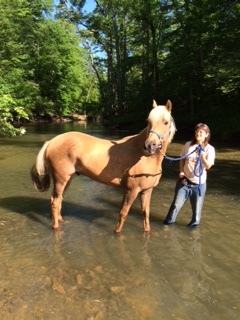 MerryLegs followed me right into the water.  Jackpot!!!  He got a handful of carrots.  He didn’t seem one bit bothered by the water.  He tried to paw, but I told him not to.  (Pawing is a precursor to rolling.)  I asked him to step around the water, and that didn’t bother him, either.  He was walking on the smooth slate surface.  He stuck his head in the water down up to his eyeballs and blew bubbles.

Suddenly, all the struggling I had done the last few days melted away.  We led him back home, and he even went in the indoor arena door without a problem.  I really think I may have the makings of a terrific trail horse.

I do believe he would have followed me across, but since Ellen had her good boots on, I decided that could wait.  Our plan is to lead him down to the river on the next possible day with Ellen riding Ranger.  We will cross and join them on their ride.  We can only go on the weekends together, and it will have to be a warm day with low water.  I can’t wait.