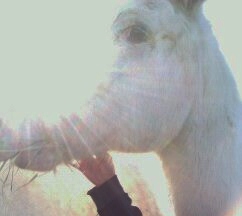 The walls were covered with horse pictures from magazines, a couple of medical machines were humming and sighing, and there was a stuffed horse-toy on the bed. She was lying facing the wall, quietly crying. I asked if I could come in, and as she turned- I was surprised to see she was half my age. I’d expected an elderly person. I forced a smile and asked if she liked horses.

I don’t know the extent of her injury, but it was severe,chronic, and the result of a riding accident. I don’t know if she was wearing a helmet. She had been there over a year; her young husband came as I was leaving.

I’m not sure this tragedy is mine to tell but I know I’m haunted by the visit. The truth is that she reminded me of myself as a little kid. Like her, I stared at pictures and longed so deep for a horse that I moaned. I was possessed with my desire, it ruled my days and nights. Once she was just like me- we could have ridden together. Now she is held captive in the hurt of wanting and not having, with a child’s mind that doesn’t comprehend.

Until I met her, I didn’t understand there was something worse than losing a horse.

Riders know all too well the risks that come with horses- every day, every ride. We weigh desire with risk and we don’t like to think about injury. I’ve written about the helmet issue before, but there’s has been more talk recently on the heels of the Riders4Helmets Helmet Safety Symposium. While opinions rage on both sides of this debate, I have been remembering the trip to the nursing home.

I can’t choose for you, but I know me- I will never be okay with not riding; that pain would never leave me. I may end up in that same nursing home room eventually, but in the meantime I’ll use every brain cell I have-to be safe as possible in my world of risk. If wearing a helmet might buy me more time on my horse, then it buys me freedom.

(Photo: Standing in the Light of a Horse.)

Comment by Gail Morse on January 25, 2011 at 5:03pm
Every time I hear a story about people riding without helmets it makes my blood boil.  One barn I boarded at insisted on everyone who was in the barn at any time had to wear a helmet.  No exceptions.  I wish all barns would use the same rule.

Comment by Marlene Thoms on January 22, 2011 at 12:04pm
As far as the acceptance thing, there are other sports where helmets didn't used to be accepted, and with a lot of resistance, change happened. Hockey is a good example, where players used to end up dead or completely paralyzed, now they get a bad concussion, and live to play again, until they rack up more concussions. It helps if those in charge insist that protective gear be used, but a lot of riders are not under anyone's instruction. It's part of the "cowboy" mentality that real men don't wear helmets, so it's harder to convince them and maybe you never will. It can't be just a macho thing, because football players are pretty tough, and take their lumps and injuries like anyone else, but they still wear the gear in the hopes of coming out alive or less injured in order to play another day. Until an individual rider accepts that a helmet may extend the period of time they will live to ride, I don't know what you can do.

Comment by Anna Blake on January 22, 2011 at 8:01am
Alli, I have been on linkedin also- that prompted this memory for me. Barbara- you are right, its crazy to debate (defending the indefensible), but so it goes. Thanks for commenting, change is slow, but I do believe it is coming. Anna

Thats a good blog Anna, ignorance is a terrable thing, but there's not much you can do about it!!

A friend of mine had a spill at a jumping clinic a couple of months ago, he had a mild concusion. The next day i had a look at his helmit, you could hear a crack in the back when you pressed the sides together. That could have been his skull !!

Comment by Alli Farkas on January 21, 2011 at 8:17pm
I have been involved in two raging debates in one of my Linked-In groups. After all the back-and-forth, I have come to the conclusion that the folks who won't consider wearing helmets are people who simply don't like being told by others what to do. All the reasoning and statistics in the world have no effect on them because they can't get past their basic feeling that they just don't wanna and nobody's going to make them. They are akin to the people who won't wear seatbelts or motorcycle or bicycle helmets. The only thing that will perhaps ultimately persuade them to "strap one on" is if all of a sudden helmets became irresistibly fashionable and desirable. They would be wearing them for the wrong reason, but at least they would be wearing them.

I don't understand why opinions rage. Why not wear a helmet? It takes one second to put on, there are many comfortable models to choose from, and they protect your brain.

I always wear a helmet.