This Week in Horse History - August 9th Through August 15th

This Week in Horse History - August 9th Through August 15th

August 11th, 1962 - Rebecca Tyler Lockhart, founder of the American Paint Stock Horse Association, recorded the pedigree of the first American Paint Horse. Rebecca acted as secretary for the association, published a newsletter and was responsible for the correspondence of the Association. The first horse registered was the tobiano stallion of Flying M Ranch named Bandits Pinto. By the end of the year, the APSHA had registered 250 horses and consisted of 150 members. August 12th, 1938 - The match race between racehorses Seabiscuit and Ligaroti was held today at Del Mar Racetrack. More than 20,000 fans attended to see Seabiscuit face Argentinian-bred Ligaroti. Bing Crosby, who had built Del Mar, arranged the match race, which offered a purse of $25,000 to the winner. When Seabiscuit and Ligaroti were neck and neck at the turn for home, the jockeys (George Woolf on Seabiscuit and Noel Richardson on Ligaroti) began to battle on horseback. Richardson grabbed Seabiscuit's saddlepad and then Woolf's whip, locking his leg with Woolf's. Woolf grabbed Ligaroti's bridle just before the finish line, and Seabiscuit won the race. After reviewing a tape of the race, the stewards allowed Woolf to return to racing, while Richardson was found at fault for most of the foul actions. 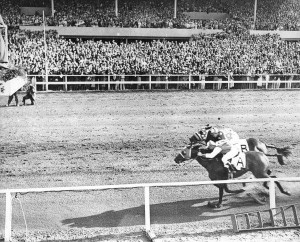 August 13th, 1919 - Man o' War was defeated by a racehorse named Upset in the Sanford Memorial at Saratoga. This was the only race in which Man o' War was defeated during his entire career of 21 starts. Man o' War was carrying fifteen pounds more than Upset, and because starting gates were not yet used, he was actually facing the wrong direction when the start of the race was signaled. Furthermore he was boxed in during the race, but still managed to finish in second place. Man o' War would go on to defeat Upset five out of the six times they raced against each other during their careers.