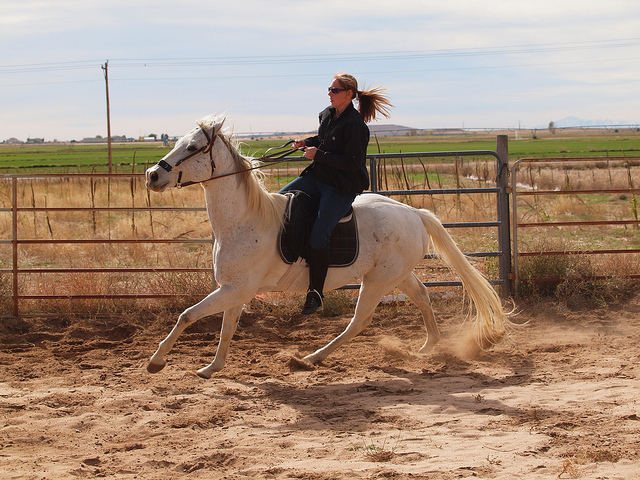 The Problem With Runaways

When a horse is running off with you, your traditional use of the reins proves ineffective. Half-halts and sitting deeply in the saddle typically work to slow your horse, but if he’s panicked, those aides won’t have any effect. The harder that you pull back on the reins, the harder your horse will lean into the bridle and run. Seesawing the reins also will not have any effect.

The idea behind the one-rein emergency stop is pretty simple: pull the horse’s head around so that he cannot keep traveling forward. By bending the horse’s body, you’re forcing him to slow down. He will have to circle around, and you can then increase the bend to the point that his nose is coming back behind his shoulder; he will be forced to stop.

Performing the one-rein emergency stop requires you to pick up one rein in one hand and bring that hand to your thigh. You then plant that hand on your thigh and pull, bending the horse’s nose around. The other rein should be left to feed out, letting the horse’s neck bend around towards you. There is typically a good deal of force involved with this movement, and you’re physically altering the horse’s position to force him to slow down and stop.

The issue with the one-rein emergency stop is that it can cause the horse to lose his balance and fall. If a horse is traveling at a flat-out gallop, suddenly bending him in a circle could lead to his toppling over on you or losing his footing. But if the horse is headed toward a busy road, a potential fall might be worth the risk.

Using a pulley rein can also stop a runaway horse, without the sudden circling that is inherent in the one-rein stop. When performing a pulley rein, you will have tension on both reins, which prevents the horse’s head from turning. One rein is used as leverage while the other puts pressure on your horse’s mouth, pulling him to a stop.

To perform a pulley rein, you will need to shorten one rein so that it is as tight as possible. Push the hand holding that short rein into the center of your horse’s neck. Take the other rein in your other hand and pull straight back and up. This takes a good deal of strength on the part of the rider, but can effectively stop a runaway horse.

When riding a runaway, getting the horse stopped is your ultimate goal. The pulley rein and the one-rein emergency stop are good tools to have in case you should ever need to put them to use.

Thank you Jackie for sharing your ideas with us.  We find it helpful to hear what strategies have worked for other riders.  It is always good to gather tools and ideas to prepare for the situation before it happens, because there isn't a lot of extra time to think about options when the situation arises; at that point, it is time to take action.  Thank you for your contribution to the discussion!

There is another way, but it works best if done during the first 2-3 strides.

Often, during the first step of the runaway the horse hits the bit HARD.  I immediately move my hands FORWARD and I apply the rein ONLY WHEN THE HORSE'S HEAD IS MOVING UP AND BACK.  The I move my hands forward immediately, and if I need to I rinse and repeat.

This can work even when the horse is into his "runaway", you just might have to repeat a few more times.

Remember, your horse probably bruised his tongue/bars when he hits the bit on the first lunge.  DO NOT apply the rein when the horse's head is going forward or down, you will just hurt his mouth giving him another reason to continue running away.  Release you rein aids IMMEDIATELY.

If that does not work the pulley rein is the best solution.  At least the horse won't fall down on you.