How to Listen to Your Horse. 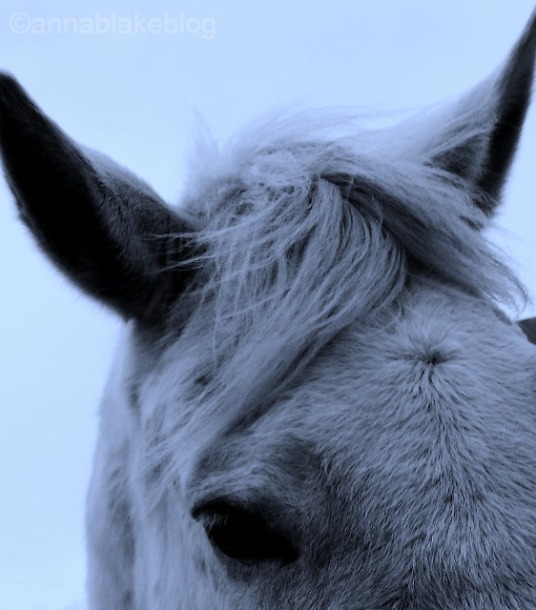 I had a friend who visited my farm during my first years here. She arrived for the weekend with books and wine. We’d cook and stay up late. In the mornings we took our coffee out into the pasture, still in our flannel pajamas, and looked at wild flowers.

I’m sure I talked about my horses too much, but she talked about everything else in the universe, so it was probably fair. She loved words and her voice had a musical quality. She never stopped talking but I didn’t mind.

To say she wasn’t a horse person was an understatement but one visit she asked to ride.

Spirit was the best choice. Back in the day, before his promotion to Grandfather Horse, he was a tolerant guy who loved people who didn’t know how to ride. Have you known horses like that? He found non-riders just a little less trouble. So I tacked him up and my friend mounted and they went for a walk-about. I worked at barn chores but I could hear her chatting with him; the notes of her voice carried in the breeze as they wandered through the pasture and around to the front of the property.

There were a few  of moments of silence, and then my friend squawked. I looked over and she was moving Spirit as fast as she could toward me, rocking in the saddle, kicking, and calling my name with one hand waving over her head as she urged him on. Eventually they got close, moving along at what you could only call a medium walk at best. Spirit will tell you there is a real up-side to non-riders.

Usually I keep quiet about horse talk but after a couple of glasses of wine, I could’ve related a comment from my horse while telling a story, or maybe my friend was just surprised to hear another voice in her head.

“What did Spirit say?” She seemed excited but it wasn’t like she was really riding him. I was sure she imagined it.

“Well, he told me to be quiet, that I talked too much, but still, I heard him,” she said.

Dang, that was him all right. He didn’t hold with chirpy drivel and one person’s musical notes might be another horse’s finger nails on the chalk board.

“Yep. Sounds about right.” Time for her to get down. She may have heard him, but now it was time to listen.

Disclaimer: I’m no animal communicator. I’m talking about just the everyday “can you scratch my backside” sort of chat.

Here is how to start: Clear out the mental litter, like work rants and to-do lists. Leave real life at the barn door and let you brain settle and breathe.

If the first message you get is something like “You need those thousand dollar breeches with the baby seal skin full-seat,” or “You really should fly to Spain and look for a pasture friend for me”, I’m guessing that it isn’t actually his voice you’re hearing. Start over. Clear you mind of work drama again, lay down the baby seal club again, and keep your horse fantasies to yourself. Listen to the quiet, just be.

If you are grooming his rump and he nibbles at his flank, take your curry right there and go at it. Tell him good boy. It isn’t a coincidence, he’s pointing where it’s itchy so take him at his word. If he shows you another spot, go right there and reward him for asking again. Teach him to talk by listening.

All this gets more important once you hit the saddle and you hear his small voice say My right shoulder is the stiff one. What you actually notice is that he is counter-bent and now is when you normally pull that inside rein. Instead of your usual counter-attack, bring your calf quiet and sweet to that soft spot just at the girth and let him feel it quietly rest there, following each stride he takes. You don’t have to kick him, just remind him that’s where bend starts. No louder than that curry conversation while grooming, just consciously follow him.

He’ll resist, reminding you that he isn’t kidding, it’s really stiff. You remember what a tight neck feels like, so your heel urges softness, like a warm touch. As your sit bones ask for a forward, rhythmic walk, let your inside rein ask for a poll release for just an instant. Don’t even hold it long enough for him to answer, it’s just a suggestion that it might feel good to him to loosen his poll. Let him think before answering.

“As long as he stiffens his poll, he also stiffens all of his other limbs. We may therefore not try to address them until he has yielded in his poll.” (E.F.Seidler, 1846)

Your horse can’t say it any clearer, his shoulder is tight and you have a choice. Teach resistance by jerking the bit against the bone of his jaw, or you could release that inside rein just an inch and release his poll just enough to remind him what a release feels like. Just like he showed you the curry spot, show him a softness in your asking hand. Then a tiny ask again, opening your inside hand another inch, wider not back,  and still in rhythm with his stride, while your inside leg supports his tight shoulder with warmth and softness. Think heating pad.

Give him a moment to read your intention to soften, and not fight. Keep walking and let him feel your patience with his shoulder. He will give it to you when he trusts your cue to release is not going to hurt and his muscles are warm. Releasing on cue, being supple, is how your horse tells you he trusts you to not bully him, but instead help him where it hurts. Just like the curry, this is a language you can build on. Trust = Relaxation.

It isn’t any different than if someone grabbed your face. It’s a decision you make to trust that person and surrender to a kiss, or flinch and escape. Asking for bend is just that intimate, just that vulnerable. Violence is always a poor excuse for understanding–it’s just common sense to distrust a bully.