I Get TWO Mini Trail Rides This Week!

I actually got to ride on the mini trail twice this week, and both time I was riding an Arabian!

Wednesday morning Debbie called me saying they were going to be fixing the footing on her ring, big equipment, lost of noise, etc..  Since I was still suffering the effects of a head cold (BAD NEWS for us with MS) I was willing to wait a day.  So I got my lesson on Thursday on the Arab gelding Mick.  The fence on the far end of the riding ring was completely down, and the sand had been laid and packed down but it had not been watered yet.  Mick did not know what to think of it all, the ground in the ring felt completely different under his hooves since he was the first horse out on the new surface.  Mick’s Arab side came to the fore (as opposed to his cavalry horse side) and he walked gingerly on the new surface.  All the old low places were gone, the footing had not packed down totally yet and Mick just was not sure about it all.  Debbie asked me for a short trot and clouds of dust billowed up.  Neither Mick nor I were thrilled.  So I walked Mick up to Debbie and asked her if she would mind taking me on a trail ride out in the woods.

Now I was not feeling well at all, my balance was waaaay off, my leg muscles were trembling, I could not really feel where my feet were, and before the RS-tor there would have been no way you could have gotten me out of the ring.  I’ve ridden for over 40 years and I have fallen lots of times, and my body always tells me when there would be no hope of me keeping my seat during difficulties.  But with my RS-tor in my hand my body did not worry as much about staying on, and this gave me enough confidence to ask to go out on the trail even when though my body was working a lot less well than normal (and my body doesn’t work very well normally anyway.)

Mick had already been down the mini trails several times so nothing was new to him.  The main problem I had with him was that he wanted to graze every time we stopped on grass.  Since Mick is ridden by a little girl I immediately told him to bring his head up and to stand for a minute without grazing (but mom, I’m HUNGRY!)  Debbie went ahead down the trail picking up fallen branches while their boxer, Bartholomew, indulged in the joy of running fast and finding obstacles to sail over.  Since I had my RS-tor in hand I felt free to ride Mick on a loose rein when I got too tired to give good contact, I did not grip hard with my legs, and I had a nice, restful trail ride.

Though I was tired from my trail ride I had to come out on the next day to ride Mia.  Since I hadn’t rasped her toes down last week I did not dare let her hooves go any longer.  At least her hooves aren’t growing as fast now.  Since the last time I rode Mia I had trouble getting her through the gate to the riding ring after my trail ride I decided to go riding on the trail first.  Friday it was bright, sunny, and WINDY, and when Mia discovered that the fence at the end of the riding ring had disappeared she went on full alert.  My usual Rock of Gibraltar all of a sudden became super ready to whirl around at the slightest sign of danger.  Then one of the black steers LOOMED out of the woods.  Relaxing my hands some I coaxed Mia past the steer monster, past the other steer monster, and onto the trail.  Mia did not totally relax, Mia was channeling her two year old self (and she is around 30), looking at everything with suspicion.  I got some good walks on contact and she was cooperative, it is just that sometimes Arabs just have to give their riders mildly exciting rides.  I guess she thought I was capable of riding out anything she’d give me.

Then, since the RS-tor people had asked me for pictures to go with my endorsement we went to the ring so my son could take pictures in the sunlight.  Mia walked right through the gate the first time I asked her to.  Several horses had been worked on the new footing so Mia did not have any problems with it.  Joe stood there taking pictures as Mia and I worked a little more, luckily in the ring she was content to relax and stop looking for monsters.  Looking at some of the pictures later it was so obvious that my body was not working right, and my legs were all over the place.  Debbie would have been yelling at me a lot!  But I was still sick, very tired, and I think that I did good to get a mini trail ride two days in a row.  Its been almost 20 years since I did that last.

I AM GETTING OUT OF THE RING!!!

Here are the three pictures I sent the RS-tor people.  My RS-tor is in my left hand.

Have a great ride! 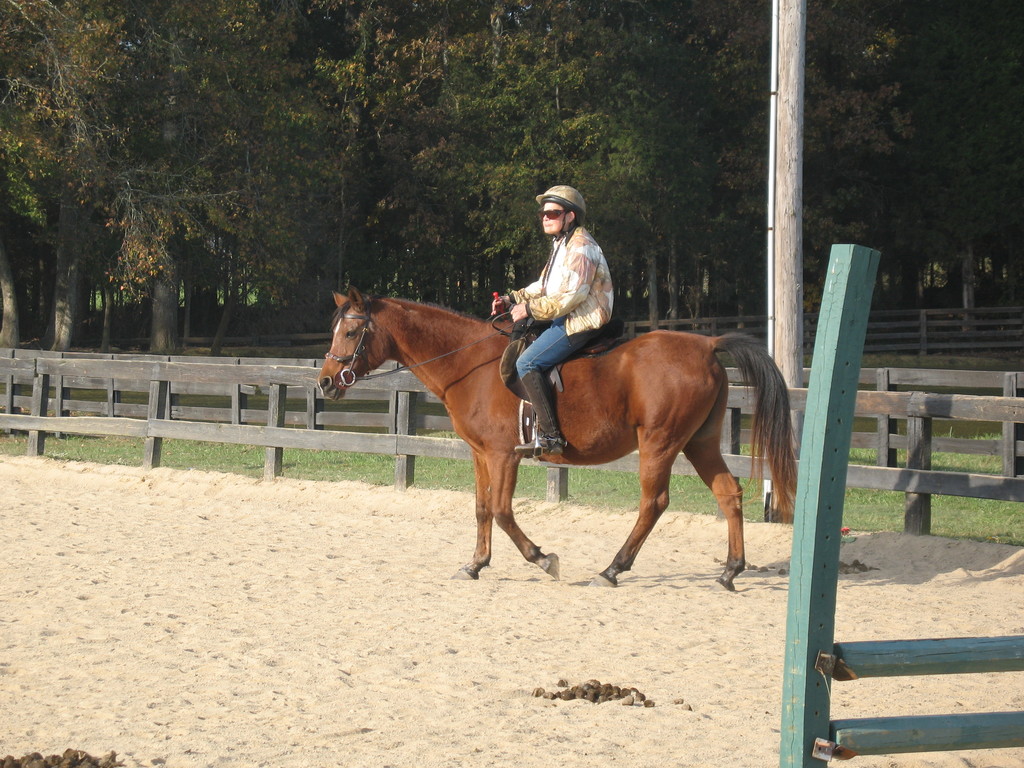 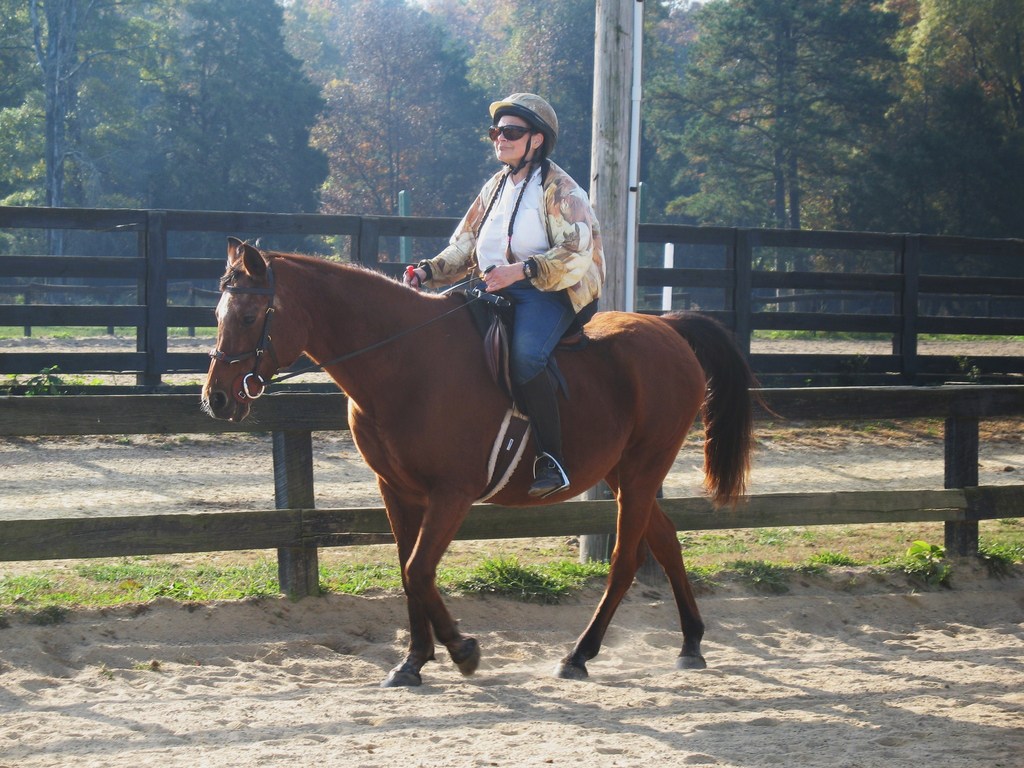 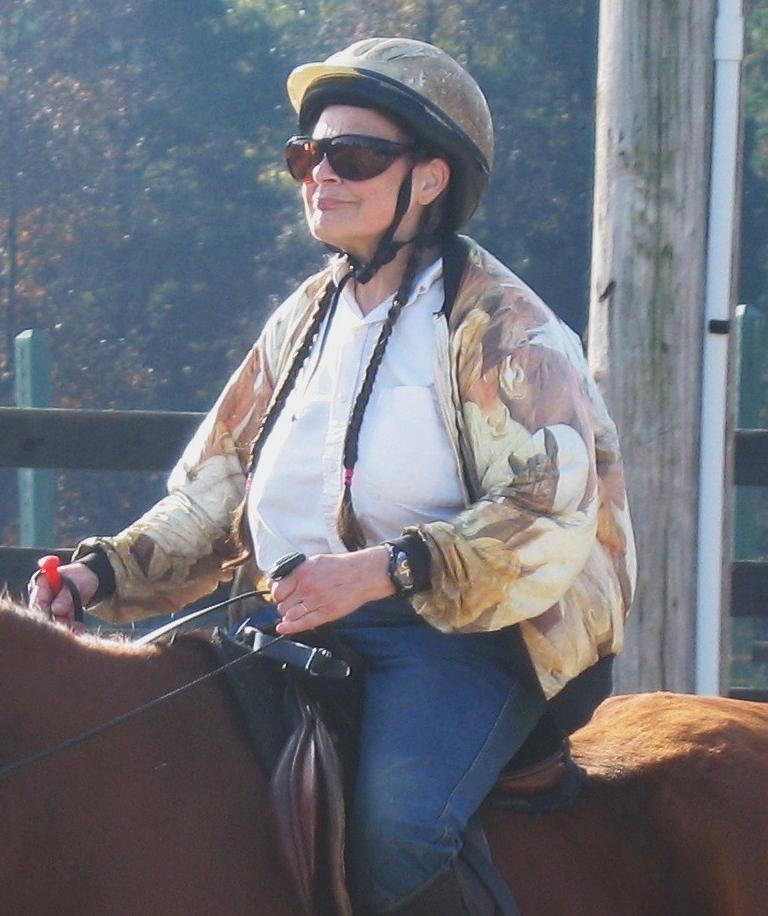 Thanks Marlene, yes I was having a wonderful time!

About the sunshine, Mia is a little spookier in the sunshine.  I love it as long as I have my sun glasses.  I need it to get more Vit. D too.

Awesome Jackie. You look like you are having a wonderful time. Do you find sunshine makes a big difference too?

Lovely to hear your news Jackie! The RS-tor is available from www.rstor.co.uk , call UK manufacturer Polypads on 44 + 1842 752020 to order internationally.