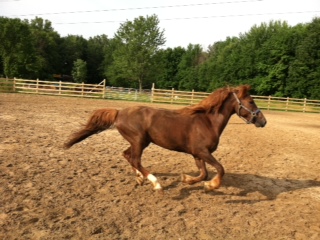 We have been having a record breaking amount of rain this summer, and yesterday was no different.  It was our 16th day in a row of rain.  Huge storms barreled through in the afternoon, but stopped just in time for our ride.

My niece came out to ride.  Since Ranger is recovering from a stone bruise, my sister offered me Dante to ride.  (I think she is trying to get free training—either that or she wanted to give me something to write about.)  There was no way we were going to cross the river, so that meant that we could only do the hill.

The hill has consistently been Cole’s worst trail, though he has improved, and lately we have been able to trot up it a few trips in a row before he gets too scary. When we trot the flat parts on the way down, he is very fast and would be too much for a novice like my niece.  We would definitely keep our ride at a walk.

I broke all the rules.  I didn’t turn Dante out to play.  I didn’t ride Dante in the arena for 15 minutes first.  I just put the saddle on him and took him out.

We mounted at the top of the hill—another broken rule.  Ellen waits at least until the center or possibly at the bottom.  My niece mounted Cole, and he decided he wasn’t going anywhere.  Dante wanted to go-go-go.  This was an awkward start.

Dante was trying to trot, but he would come down to a walk when I asked him.  I decided to stop him so Cole could catch up—no brakes!!!  Ellen said he had no brakes on the trail, but I didn’t realize how bad he was.  It really doesn’t make any sense since he is so good in the arena.  I think it is just excitement.  I tried bending him and spinning him like I used to do with Cruiser when he wouldn’t stop, and it made no difference. At least with the spinning, Cole caught up.

I knew that Kevin was somewhere walking on the hill because I saw his water bottle.  I needed him.  Dante kept walking faster and faster—throwing in some trotting.  Spinning still didn’t help.  Though I could do a flying dismount if necessary, I preferred not to.  I was on a runaway walking horse.  As we neared the steepest part of the hill at the bottom, he started to trot.  Finally, I saw Kevin, and I called to him to come to me right away.

His response was, “Why is Cruiser being so bad?”  Well, I know that they are both chestnut and have blazes, but Dante and a skinny blaze and Cruiser has a very wide blaze.

Anyway, having Kevin next to me helped a lot.  I knew that he could stop him if things got out of hand.  When we got to the end of the trail, Dante still wouldn’t stop.  It is quite wide there, so I just took him into small circles and waited until he decided he wasn’t having any fun.  I think it took about 5 rotations and then finally he stopped.  I clicked and treated him.  We stood and at that point, Kevin glanced back at my niece on Cole and said, “So, how is Ranger doing?”  Sure, one is dark brown and one is black—hard to tell the difference in the shade, but one is a pony and the other a behemoth.  At first, I thought he was kidding, but he wasn’t.  We all laughed.

We started up the hill.  Dante was in the lead.  Kevin was holding a rein, and I was determined to get him stopping.  Over and over, I asked him to stop, and he would very reluctantly stop.  At first, I needed Kevin’s help, but gradually he relinquished control.  I clicked and treated each time.  When we got up to the top and turned around to do it again, I told Kevin to let go and I would do it on my own.  Right away, I asked for a halt and got it.  Click/treat.  We did lots of halts, and he kept getting better.  I had Kevin give Dante grass as treats.  Cole was no longer listening to my niece.  He saw Kevin with grass, and he heard me clicking.  He thought he should be getting treats.

We got to the bottom, turned around and rode to the top.  I had a different horse. He was stopping promptly and traveling more relaxed.  I couldn’t believe the difference, but Dante is a very quick learner, and clicking is a very quick way to teach a horse.  He already knew how to stop, but he didn’t want to.  With clicker, he had incentive—and turned his attention to me rather than his own agenda.

My niece told me after the ride that when Dante was misbehaving, Cole was perfectly behaved.  This made me very proud of my little horse.

We went back to the barn, and I let my niece continue to ride Cole in the arena while I walked Cruiser.  My nieces are lucky that we take them on trail rides, but they have large knowledge gaps with their riding skills because of it.  This way, I was able to explain to her how to ride straight lines and turns.  She had to improve her reactions (Cole preferred to stop and look out the windows) and think ahead to what she wanted to do next.  I definitely saw improvement.

Overall it was a good evening where everyone learned a little bit.