My Nightmare of leasing my horse

Well it could have been worse, the horse could have been stolen!  My leasing experience is not as bad as some but bad enough, the horse is reasonably okay but the people were quite a nightmare to deal with.  I thought I had got a wonderful long term lease for my school horse Bandit with a novice adult rider wanting to get back into shape after years of being away from riding.  I knew the trainer and she seemed like a decent person, albeit less experienced than me but I was willing to give people the benefit of the doubt.  I went into this with a detailed contract stating that the horse should have the same diet, same farrier, and 2 months notice in writing on either side for termination of the lease. I even sent out his bridle, saddle, blankets, grooming kit, vitamins - everything the horse could possibly need.  This was a free lease situation, they paid the board at their barn.  I even went out and rode the horse for them, he was his usual quiet self, no problems, I suppose the red light should have gone off when she said " oh he didn't spook at the mailbox". Well my horses don't spook at much, it's the way I train them, they have to be double safe if they are going to be ridden by novices after all.

Right off the bat they got another farrier to trim Bandit's feet, I was not amused but reminded them that they had signed a contract saying they would use my farrier.  Then 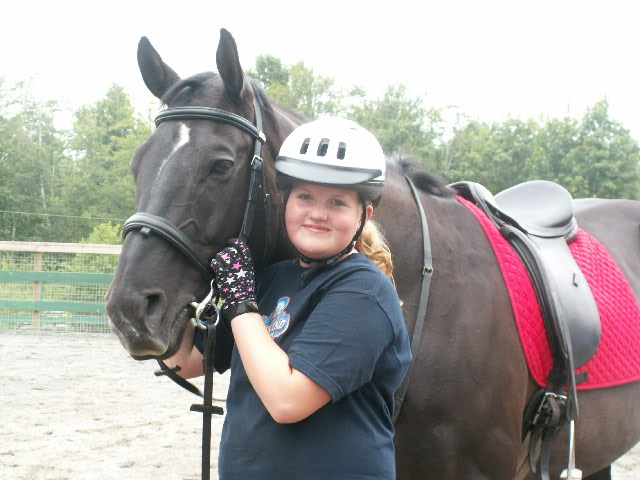 within 3 days all of a sudden they wanted to change his diet, again I said no, you signed an agreement.  Then the next thing was my horse is pushy on the ground, not interested in natural horsemnship and twirling ropes and roundpen work.  Bandfit is 15 and has been a hunter/jumper all his life, he had no idea what they wanted, and I told them this before they took him, and they did try him out before they signed the contract I might add.  Then my horse who comes to me in the field, suddenly became hard to catch, a problem I had never had.  One thing after another was wrong with my horse, who I had never had issues with.  Now I was beginning to worry.  The next thing I know they want to give me 2 months notice but I must come and pick up the horse right away, with no offer of paying the 2 months board they owed.  I stood my ground and said, either 2 months board or you keep the horse for the appointed time.

I was beginning to worry, and so I went out to ride him, he came to me right away in the field, and we went for a good ride, but I did notice he had dropped weight and was quite stiff to ride and on the forehand.  I was told he had been given a half of a wormer, and so I gave him the other half - it was  the double dose of Exodus for tapeworm. I was also very concerned about his feet, they were long, square toed and one had a nasty crack.  I enquired to be told that the farrier - not my farrier - was coming out the following Thursday. I reminded them to call my farrier, they refused so I called her and then informed them she would be there on the Tuesday to tend to Bandits feet.  Well all hell broke loose after that!  The owner of the barn wrote me a very long poison pen e-mail, calling me every name in the book and saying all kinds of untrue things about my horse.  They then went behind my back to my barn owner, made an anonymous phone call enquiring about board, and arranged to drop the horse off 6 weeks before the contract was up.  But of course I am being blamed for everything! So they paid a half months board and Bandit came back to me - cold, wet and covered in mud with no rug on.  He had lost even more weight, and he was very bodysore when I gave him a nice hot bath, wrapped him up in polar fleece coolers and put him in his stall for the night.  He attacked his food like a starving man, not usual for him either.  That night I called my ex-husband who does chiropractic type work on horses, we worked together for 11 years at our rehab centre, and he came the next day and worked on Bandit who had lots of issues and was very sore.  I think it was from being chased in a roundpen.  This is the fault of the practitioner not the practice, I personally do not use a roundpen, as I use Classical methods which render a roundpen unnecessary, but its how you do it that matters, not the equipment you use.  Bandit was so grateful and was yawning and could hardly keep his eyes open after Anthony was done with him.  I could tell that even his neck muscles and shoulders had started to change shape from just 6 weeks at this lady's place, and now I have to stretch him out again and get him supple and his body working properly.

So even if you get a contract signed, you cannot  trust people to stick to an agreement, Bandit will not be leaving my barn anytime again soon.  I replied to the poison pen e-mail by saying that all it showed me was how much fear  the person writing it lives in.  I did not get into a mudslinging match with someone who is obviously threatened by me and made me out to be the bad guy because I refused to be manipulated and tried to get them to stick to the agreement that they signed!!  It's sad when people cut off their nose to spite their face in situations like this, as they could have learned a great deal from both myself and the horse, but you know what, it's not my business to try and sort out other people's dilemmas, or to interfer in their journey.  I wish them all well, but it may be a long row to hoe with that kind of attitude getting in the way!  Until next time, Blessings always, All ways, Namaste.

Thanks Jackie, yes I know. YOu know I can lunge on small circles too but I always make sure the horse is ready for it with lots of suppling and going slowly and collected, but when they do that work at speed, the horse in unbalanced and it literally tears their body apart.  Also the roundpen work when they have the horse free, and bending outwards instead of inwards, it puts all the weight on the inside shoulder and twists the spine so its counter productive, oh well he is home now, all fixed up and much happier, he will get a massage from me today lucky boy!! cheers!

I'm sorry your went through all of that.

Unfortunately we are about the only people qualified to handle our horses.  One reason it is so hard to find a good boarding situation.

Another NH practice that may have harmed Bandit is the lunging on a 12 foot line.  Like you I am much more classical here, I like a 30 foot lunge line.