Hi everyone, sorry it’s been so long since my last post. You see, I had some unwanted drama in my life this past month and I’ll share the details with you soon, but first I wanted to share this short video of Chance and I. We were filmed a few weeks ago for the “Story Tellers” segment on the AZ Central website. You can find the finished product here: http://www.azcentral.com/storytellers/video.php?vid=991502727001&am....

Now back to the good stuff.  So, Chance and I finished our last qualifier for the North American Young Rider Championships in April and I was second in the standings for the team, so preparations were in full swing to go back to Kentucky for the championships at the end of July.  Then, I was lunging a horse on May 30th, a typical day at the barn, when he spun around and kicked me in the right elbow.  I didn’t know the magnitude of the injury at first but, after a ride to the hospital in an ambulance, a X-Ray, a CT scan, and finally surgery, I found out that my elbow had shattered into seven or eight large pieces and several other small fragments.  The surgeon had placed six screws and a plate in my arm in order to piece it all back together.  Then, a week later, I had to go back for another surgery because one of the screws was too long and it was impairing my movement.  I was told it would be months until I could ride again.  Although devastating, I accepted the news and set myself down for a long recovery.  Well, the thing is, that’s easier said than done.  I threw myself into physical therapy, working over five hours a day in order to get back the range of motion I needed to ride.  I’m not going to lie, it was not easy.  But, all I could think about was getting on my horse again.  On June 27th, after one month of excruciating work, I was able to get back into the saddle.  I cannot describe the way it felt, but I knew I was exactly where I belonged.

Now, preparations for Kentucky are once again in full swing! After a month out of the saddle, I have about twenty training days to get ready for the biggest championship in my career so far.  This has definitely been the roughest road to the NAJYRC for me so far, but I sure hope it pays off!

Right after the accident. 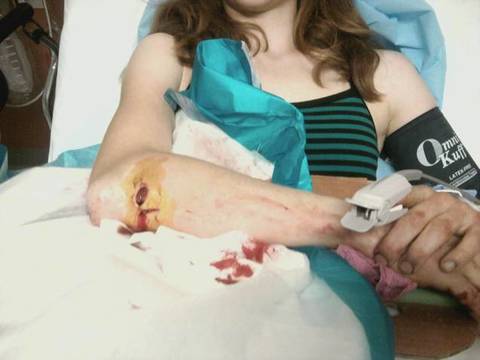 Visiting Chance after my ordeal, he didn't like my brace! 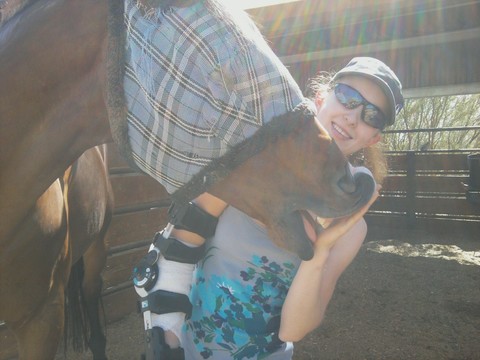 A couple of weeks after surgery. 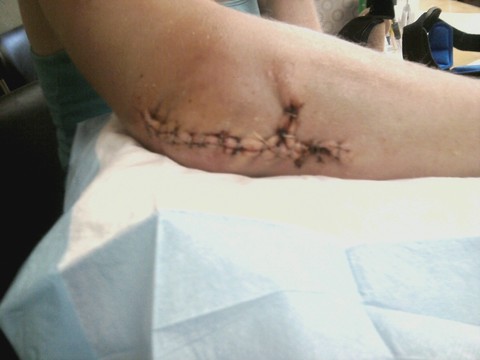 I got myself some Sketcher's Shape-Ups, a thigh toner, and ankle weights to keep in shape for the month I couldn't ride! ouch, so sorry about your elbow, you seem to be one tough cookie, already back in the saddle.