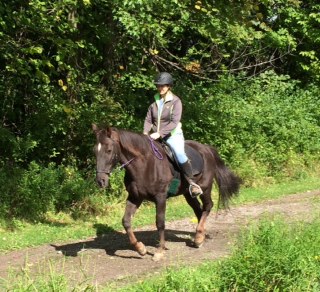 Ranger is a very temperamental horse.  He is in an end stall.  Years ago, my horse, Mingo was in the stall next to him.  They were great friends.  I had Mingo from birth, and Ranger helped raise him.  They always got along.  If Ranger was out on a ride, Mingo would stick his nose between the bars when Ranger came back.  Ranger would ignore him, of course.  They would hang out next to each other, and when it rained, they would both huddle in the corner together.

When Mingo went to the great pasture in the sky, Cole moved next to Ranger.  Cole was respectful of Ranger, but they were never friends.  Cole was only in that stall a short time and then he moved across the aisle and Sam, the Thoroughbred.  Ranger hated Sam.  He would kick the wall, screech at him if he was close by and constantly make faces at him.  We had to be careful when we were cleaning his stall that we did not get in the way of his antics.

When Ellen got Dante, we moved him into the stall next to Ranger so we could keep all the horses together.  Sam moved off to a different part of the stables and Ranger seemed happier—but poor Dante.  We don’t know what happened between them, but Dante just wouldn’t go by Ranger’s wall.  He would either stand exactly in the center of the stall or hang out on the other side.

Once Cruiser died, we moved Dante into his old stall.  The change in Dante’s stall behavior was measurealble.  He came out of his shell, learned to play with Starry and seemed like he was so much happier.

We had anoter horse in the stall for a few months, and Ranger didn’t much care for him.  He didn’t hate him like he hated Sam, but a lot of his kicking and screeching came back.

The stall has been empty for a while, now, but we knew that wouldn’t last forever.  This weekend, a pony moved in.  She is only about 3 feet tall.  We are very optimistic that this might work out because she is so small that Ranger won’t feel threatened.  Also, her feed dish that is right on Ranger’s wall had to be lowered so far that it is funny.  I don’t know if we ever had Ranger next to a female, before, so we are hoping that might help, too.

When she showed up, I was told there was a lot of screeching and kicking from Ranger.  She got riled up, too, and they saw her rearing in the stall.  It must have been cute.  The next day, Kevin said he heard some screeching.  By the time I got out, things seemed quiet.  I took Ranger out on his walk.  When I put him back into the stall, I led him to where she was standing so he could see her.  Then she reached up her nose really, really high and barely made it to the bottom of the bars, but it was high enough that he could sniff her nose.  He gave a subdued screech and all was fine.

This morning, when Ellen got back from her ride, she rushed to see him.  He ignored her—just like he used to ignore Mingo.

I think the difference, this time, won’t be because she is small or a mare, but because she seems to like him.  He hasn’t had a horse that genuinely liked him since Mingo.  Hopefully, when he acts out, she won’t cower like Dante or become aggressive like Sam.  If she will be nice to him, maybe he will just calm down.  She sure is cute…