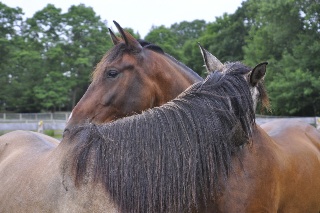 More new horses! So much for the quiet country life. I think Lil’s losing her mind. But, hey, she’s the one who has to feed everybody and make sure we get turned out and our stalls get cleaned, so I guess it’s her prerogative. And anyway, at least these last two are only visiting. Good thing, too, or I might have to take matters into my own hands. More on that in a minute.

Two weeks ago I walked into my stall in the evening and there, in the stall beside me, was a horse I’d never met before. Now, normally, I’m cool with that. I love company, and I love that whenever a new horse needs to be introduced into the herd, Lil lets me meet him (or her) first. I like to make the introductions to the rest of the gang. But this horse? I don’t know. He’s awfully good looking, and the way he acts I think he might be deluding himself into thinking he’s a Friesian. All charming and delightful and he likes people almost as much as I do and, you know, he’s stealing the attention that’s rightfully mine! People are all beside themselves, patting and ogling and feeding him carrots and “oh, isn’t he beautiful!” Hey! What about the black horse in the stall next door? Me? If you’re going to go ga-ga over any equine, it should be me!

And then, a week or so later, another one shows up! The first one’s younger brother, and wouldn’t you know it, he’s even better looking! Now the situation’s getting serious and I’m considering slipping the latch on their paddock and turning them loose. Let’s see how long you guys make it on your own without the humans looking after you! Have you heard those coyotes yapping it up at dusk?

I guess Wilby goody-two-shoes figured out what I was thinking, ‘cause he gave me quite the talking-to. Seems thoughts of “disappearing” the competition are un-Friesian and unacceptable. Pardon me! I didn’t know there was a code of ethics. But the humans saved me from myself anyway. The two pretty-boys have been sold and will be leaving for the beautiful province of Nova Scotia soon. Is it too late to start being gracious?

The one who lives in the stall next to mine is named Hypnotiq, and he’s a four-year-old son of Soberbio XII. Cutie-pie is his three-year-old brother Symphoniq. Both are purebred Andalusians (or, as they’re called these days, Pura Rasa Espanol). So that explains the looks and the brains. Like us Friesians, the Andalusian is a Baroque horse (also includes Lipizzaners, Lusitanos, and the Kladruber from the Czech Republic which happens to be where Lil was born). The “boys’” daddy, Soberbio, hung out in our barn for a couple of days two years ago on his way to a dressage clinic, and I must say I was impressed. Stallions can be a little sketchy, but this one is all class. A true gentleman. And very lovely.

So I’ve decided to let them have their moment in the sun. The novelty will probably wear off soon and my many adoring humans will return to worshipping me. “The boys” are due to leave on Sunday. And if they don’t, that paddock latch really is a piece of cake to open. 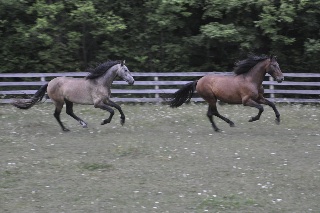 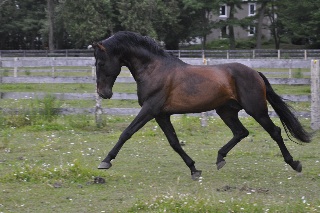 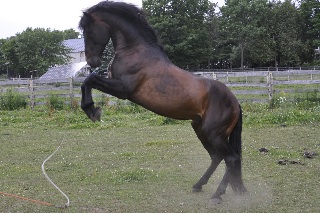 Love the perspective.  Thanks for the smile!

May all humans go back to worshipping you properly Henk!