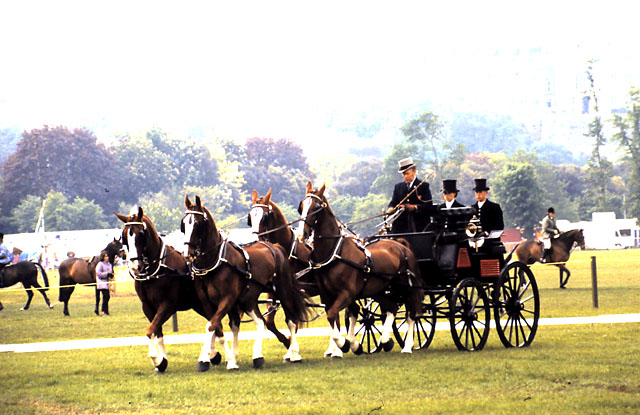 The first Royal Windsor Horse show was attended by King George VI as well as Queen Elizabeth. Princess Elizabeth and Princess Margaret both competed in the first show held on the grounds of the stunning Windsor Castle, located in the Berkshire county of England.

As the first show was highly successful, it quickly became a tradition, growing in both size and significance. Events and attractions were added, including the recent addition of fireworks at the show’s end, and presentations by the King’s Troop Royal Horse Artillery in which teams of horses pull heavy traditional artillery equipment.

The show has been well-supported by the royal family. Royal family members both attend the show and occasionally compete – Princess Anne regularly rode in the showjumping competition. The Duke of Edinburgh, a carriage driving enthusiast, also encouraged the show to organize driving competitions, which he competed in.

As the show grew in size and attendance, weather proved a problem, cancelling the show during some years. An arena created specifically for the show was completed in 2005, allowing the competition to continue despite the weather. Over its history the show has been relocated to several different parts of the Windsor Castle grounds.

The Royal Windsor Horse Show of today hosts top equine competitors from around the world. This year’s show, held on May 14th through May 18th, includes 130 competition classes. For the first time ever, this year’s show includes show jumping, dressage, carriage driving, and endurance, sporting international competitors in all four disciplines.

In addition to the impressive quality of the competitions, the Royal Windsor Horse Show boasts excellent entertainment for any attendee. This year’s show includes extensive shopping opportunities, a wide range of food, a craft tent, and even a Land Rover driving experience. Additionally, the Household Cavalry will present a musical ride, and the Shetland Pony Grand National is sure to entertain. (For more information on the Shetland Pony Grand National, see Classic Equine Equipment’s blog post on the fun event.)

Attending the Royal Windsor Horse Show is sure to be a once-in-a-lifetime experience. You’ll have the opportunity to watch some of the finest equine competitors in the world, and who wouldn’t want to see the Shetland Pony Grand National in person?

Thank you Barnmice for reading!  The research was fun!