The Horse in the Iron Mask

A couple of new horses arrived at the farm last week: an older chestnut warmblood named Lego, and his pet, a mini named… well… not really named. I’ll tell you more about that later.

When these two arrived, they got regular stalls in the barn like the rest of us, but instead of going out in one of the paddocks we use, they went into the sand-ring on the other side of the barn. Once we all go outside in the morning, the only evidence we have that Lego and the mini even exist is Lego’s screaming. He whinnies all the time. Someone pulls up at the house and opens their car door – Lego whinnies. Lil lets the dogs out for a pee – Lego whinnies. The neighbour starts cutting his grass – Lego whinnies. But we don’t see them, and we certainly don’t have any contact with them. This, plus the fact that Lego goes outside wearing a wire-mesh cage over his nose has caused some crazy speculation among the rest of the animals. I, of course, threw gasoline on the fire by suggesting that Lego was a cannibal who couldn’t share a paddock with us because he’d try to rip chunks of flesh out of us and eat it. The mini, I told them, was too ornery for him to attack, but still Lego had to wear the muzzle to make absolutely sure. It was a stupid story, but a few of the others bought it. I had to laugh at the way Charlee and Sunny skirted around Lego’s stall, fully expecting him to reach out and snatch a meal from their sides! (I’m always amazed at the trouble some horses have separating the carnivores from the vegetarians in their life. It’s like Lil’s old horse Oscar. The sight of a deer would send him running for his life, but a coyote didn’t scare him at all).

The real story of Lego and the mini is of course much less interesting than my fairy tale: Lego suffered a bout of laminitis followed by founder several years ago while living at another farm. The best his human, Jo, could figure was that the laminitis was brought on by overly rich hay (too much alfalfa), and the founder was bad enough that another episode would probably bring his coffin bones right out through the soles of his feet. Thank goodness for our farrier, Rodd (who also looked after Jo’s horses). He has Lego so well trimmed and shod and padded that you’d never know anything had happened to him. Still, Jo won’t risk a relapse, and because there were a few determined patches of grass sprouting in the sand ring (probably because no one ever rides in it – preferring to use either the arena for schooling or the hay fields for a hack), she insisted on the muzzle just to make absolutely sure old Lego didn’t ingest anything that could make him sick again.

As to the mini, well, Jo bought him to keep Lego company when he was living at her house. After Lego foundered and couldn’t be ridden for months while he recovered, Jo started referring to him as “Useless.” A paddock ornament who just stands around and eats and poops and looks good. The mini, whose only role was to keep Lego company, naturally became “Little Useless.” But Jo adores Lego, who was foaled at her hobby farm and has been with her all his life, so the Useless label didn’t stick to him for very long. The mini, however, remained “Little Useless,” and I think that’s a big part of the reason for his attitude. He really doesn’t like Jo. (The fact that she had to sit on his head while the vet castrated him probably didn’t help their relationship, either). He pins his ears and gives her attitude the likes of which I’ve never seen. At first Lil was worried that he might bite or kick one of the kids who come for therapeutic riding (because of course everyone wants to go and pet him, he’s so miniaturely cute), but he’s never shown his surly side with anyone but Jo. Just to make sure, though, Lil and the family renamed him. At our farm he’s known as Timbit (personally, I don’t know that being named after a small doughnut would make me particularly happy, but I guess it’s better than having the whole point of your existence brought into question all the time).

Once the ground freezes and the snow flies, Lego and Timbit will be moving into our paddock. I’m willing to bet Timbit tries to take on Wilby and challenge for the job of herd boss (he lived with us for a few months last winter while Jo recovered from shoulder surgery and he tried to pick a fight with Moose, our 17-hand Belgian-cross who could flatten him with one hoof). It should be interesting. I’ll keep you posted. In the meantime, here’s a picture of Lego in his Hannibal Lecter get-up. Be careful. He might try to eat your liver. With some fava beans and a nice chianti. (If you don’t understand that last sentence, watch Silence of the Lambs). 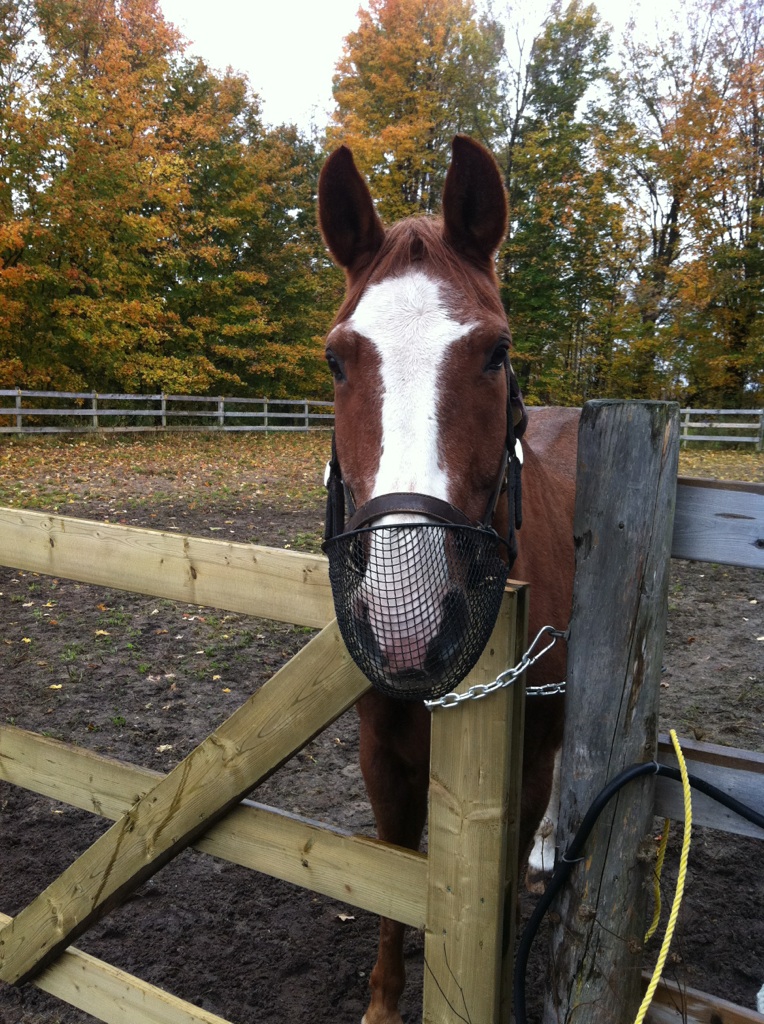