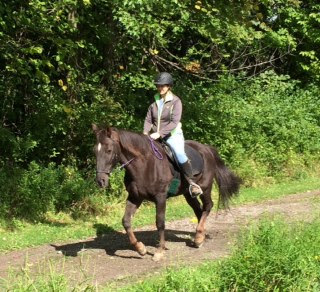 One really, really important thing that a trail horse needs to know is to stand still upon request. This includes both in the saddle and on the ground. I never realized that Ellen didn’t take the time to teach Ranger to stand when she is leading him. That explains why he dances around so much when she tries to run down his stirrups when she takes him outside. I thought that he was misbehaving, when actually, he was doing what he was used to doing. He didn’t know he was supposed to stand still for tack adjustments.

Well, now that he is my evening project, I have a goal. I am going to teach Ranger to stand still on command. He doesn’t have to park out like Cole—or bow. He just needs to be still.

I have been working with him for about a week, and he is starting to get it. Things always go quicker with clicker. After our evening walkabout, we stop in the driveway and stand. I click him when he is still. When he moves, I ask him to stop and start all over. The first day, he was very fidgety. Each time after that, he got better.

I noticed that if he is standing balanced, he will maintain his position longer—more clicks and treats. So, even though he isn’t parked out, the squarer his stance, the better he does. It is about setting him up for success. He loves the treats and the attention. I have started to walk from one side of him to the next while he is standing, and it is working.

He is far, far from perfect. About the maximum time he has lasted has been 30 seconds, but he has a lifetime of fidgeting to forget. I’m sure Ellen will be eternally grateful when he will stop and stand still for her until she asks him to go forward, again.