Mark Todd's Olympic horse NZB Galdalf has been put down as the result of a serious neurological disorder.

The loss of the 11-year-old grey was announced by the New Zealand Bloodstock eventing team today.

Gandalf was Todd's 2008 Hong Kong Olympic mount, and had recently suffered seizures which caused him to become blind in his right eye. He had become a danger to himself and his handlers, NZB said.

Mark Todd was naturally the person most upset by the loss. "It was a very hard decision to make but the wellbeing of the horse is what we have to consider foremost.

"It's also sad for New Zealand eventing to lose a horse of his calibre. Unfortunately we didn't get to see the best of him." 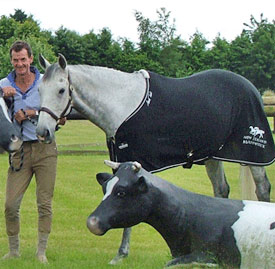 Mark Todd with Gandalf at Home

In one of the most exciting and bold sporting decisions of the 21st cCentury, it was in November 2007 where the seeds of a comeback for the Rider of the 20th Century were planted, over a few glasses of wine with fellow eventing enthusiasts.

Some 24 years after he won his first gold medal at Los Angeles and after an eight year retirement, Todd made a return to the sport. During his time away from eventing Todd trained racehorses, including NZ Oaks winner Bramble Rose and Wellington Cup winner Willy Smith.

Born in 1998, Gandalf was by the pinto sporthorse sire Pintado Desperado and out of the thoroughbred mare Princess of Power (Galaxy Bound). He was bought as a yearling by Anglea Lloyd, who produced him to three star level. Their biggest win was the 2007 Richfields International CCI***.

In nine months, Todd and NZB Gandalf qualified for the Olympic Games in 2008 and were selected to represent New Zealand. The pair finished 17th out of 70 competitors.

Despite Gandalf's untimely demise, Todd will continue his bid to represent New Zealand at London 2012 and has a strong team of horses behind him including NZB Mouse, NZB Land Vision, NZB Grass Valley and recent purchase NZB Campino.

Todd is positive about the team's prospects for 2010.

"With the loss of NZB Gandalf I'll be looking to our other horses to step up. I'm hoping to start NZB Grass Valley at Badminton (30 April - 3 May) and NZB Land Vision at Samur (20 - 23 May). Either of these two could be chances of getting to the Alltech FEI World Games in Kentucky in October," he said.

Permalink Reply by Elizabeth Gormley on December 24, 2009 at 11:31am
Wow that is so sad and terrible. He was a great horse and if I remember correctly he had a placid gentle temperament. He was even in a music video.

Permalink Reply by Ron Clark on December 28, 2009 at 7:39pm
I loved that horse. He had a big heart and a lot of talent. It is a tragedy that we lost him so soon.