Having also won the $10,000 Hickey Freeman/Bobby Jones Welcome Stake on Friday, July 23, as well as the $10,000 Vermont Bird Place and Sky Watch Open Welcome Stake the previous week on Friday, July 16, Jacobs and Kachina were looking for a third victory. The goal was within reach when they added their names to the list of five horse-rider combinations from a starting field of 21 that would advance to the all-deciding jump-off. The shortened jump-off course gave riders options at almost every obstacle, daring the brave to make tight turns and go inside other obstacles. Jacobs and Kachina made the tight inside turns and when they crossed the finish line in a time of 34.292 seconds, it proved to be the best of the class. While receiving his first place prize check of $9,000, Jacobs noted that he had won the $30,000 Otter Creek Grand Prix riding in a Devoucoux saddle.

“We had a good week,” said Jacobs, who also won the $30,000 Otter Creek Grand Prix in 2008 riding Kachina. “She is quite a horse. I don’t show her a lot; I can’t because of my job. She just does whatever I ask of her. My plan for the jump-off worked out. Usually something goes wrong, but this one worked!” 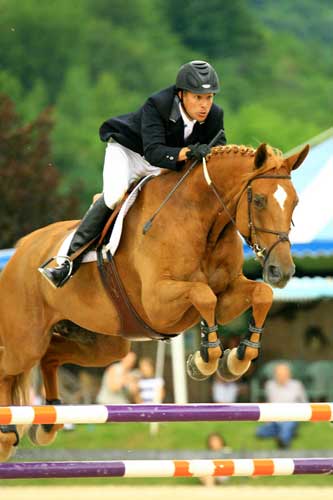 Louis Jacobs and Kachina won the $30,000 Otter Creek Grand Prix, Presented by Devoucoux, on Sunday, July 25, during the third week of competition at the Vermont Summer Festival in East Dorset, VT.”

Jacobs continued, “She is a little bit of a slow mover, so I try to make it up with the stride, and she can leave out strides. She’s had a nice couple of weeks here and this is a good show for me because the jumps aren’t over the top and it is a nice place to step up. She is a real good babysitter. Because I am not a professional and this is not my job, I make my share of mistakes and she really covers up, so I am very lucky. She is very special.”

Darragh Kenny is another familiar face in the winner’s circle in Vermont, but the young Irishman settled for second place with Gael Force, owned by Missy Clark and North Run. The pair made impressive turns and left the rails in place, but when they stopped the clock in 35.030 seconds, it was not fast enough to take the win.

Jimmy Torano of Ft. Lauderdale, FL, piloted Topaz through the course in a time of 38.055 seconds to take home third place. One of several new additions to Torano’s stable, Topaz is owned by Laura Lee Montross.

Chris Ewanouski of West Palm Beach, FL, and Vertigo, owned by Geoff Teal, were the sleepers in the competition. Their double clear rounds and a jump-off time of 40.617 gave them fourth place.

“This is his first major Grand Prix,” said a very happy Ewanouski. “He did a couple Welcome’s and a small Grand Prix at the end of the Winter Equestrian Festival in Wellington, FL, but this is his first real one. We really took our time with him. Because he is young, we really made sure that before we tried this, he was rideable enough, confident enough, and fit enough. We didn’t want to rush it and have it go wrong. As an eight-year-old we thought he could really do this so easily, but we wanted to make sure before we threw him right in. It’s not just a matter of whether they jump high; you need to make sure that all the other pieces are there. I am totally happy with this. I didn’t necessarily come to win; I don’t think I could have asked him to go any faster. It would have been a little too much for him at this stage of the game. I wanted him to jump clear and we jumped double clear so I am extra happy.”

Torano also took fifth place with another young mount, Winsom, owned by Sir Ruly Inc. A little inexperienced at only seven years of age, Winsom was surprised in the jump-off when a fence appeared right in front of him, and he put on the brakes as a result. Despite incurring a four-fault penalty for the refusal, the pair still made it home within the time allowed, attesting to the foot speed of the little grey.

The fourth of six weeks of competition comprising the Vermont Summer Festival gets underway on Wednesday, July 28. The fourth week’s featured event is the $30,000 Mount Equinox Grand Prix, beginning at 1 p.m. on Sunday, August 1. Located at Harold Beebe Farm in East Dorset, admission is $5 for adults and $3 for children Wednesday through Saturday. On Grand Prix Sunday, admission is $7 for adults and $5 for children. All gate proceeds benefit Manchester Elementary-Middle School (MEMS).