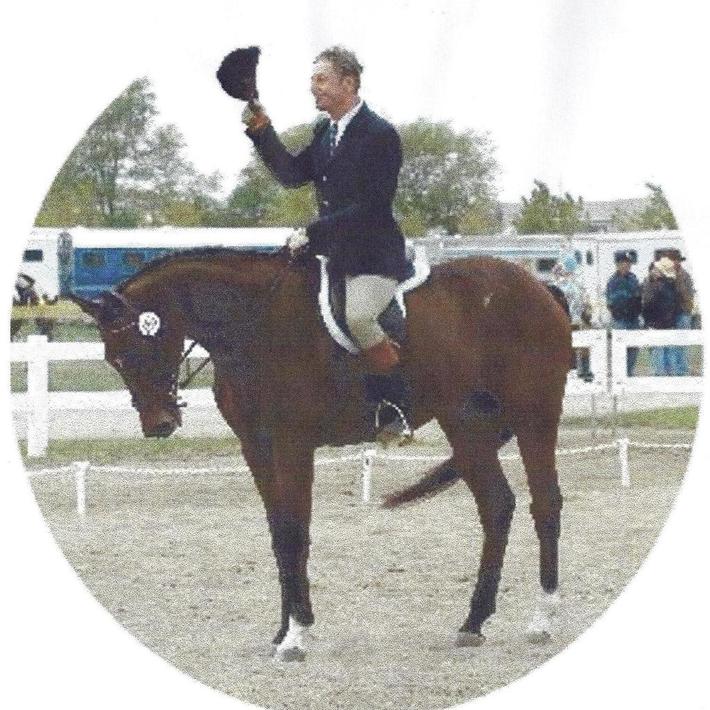 Christopher Hyams has not received any gifts yet

A Bit About Me and my Horse(s)
Dressage is my craft. It is what I do.

Do you have any pets?
I am daily surrounded by terriers, many of whom have trained me to play ball with them

Interesting to hear that the arms and hands of the rider are '50%' of the reigns. Also, this video clearly shows me the movement of the pelvis with the horse, back stationary, hands not pulling on the reigns . . . Now, to cause a distraction to my young coach so I can connect a little further with Winchester. Hmmm.

so much enjoy reading your posts and replies. The exercises alone are sure to make a difference so I have taken to the stairs!  Also, I just love this quote you offered: Learning to "be one in motion with a horse" is one of life's most magnificent adventures...the preparations are multitudinous, riding itself is easy-riding well is the best revenge."  Indeed, Sir.

I really take your comment about mentorship seriously. I am so much in the early stages of things but it was near impossible to locate a seasoned male rider.  I am grateful for the young woman taking me through the basics but I do see already the need to consider reaching out beyond this. Any advice for someone in Lower Mainland British Columbia would be well received.

I'm looking at this all as a process and not a thing with an end-point, the start of a wonderful exploration. I thank you for your kind words of advice, and your reception to my brazen questioning of 'seat' issues.  Regards, Chris

I am also glad we are in touch and I apologize that this message has been so long in coming. We just had my brother and his wife visiting from the UK so its been very hectic. Neither of them drives! No, not ever so they are completely dependent on us when they are here. It was a little easier when we lived in the city as they could take themselves out and about.

The best day of their visit (for me) was when I took them with me to visit the stud farm where my horse was born. The farm is in a beautiful area and so the drive itself was quite lovely, and the farm is spectacular - gorgeous pastures and the largest barn I've ever been in. They breed Hanoverians and Standardbreds and we met a group of absolutely gorgeous yearlings, one of which is sold to the UK and soon be be shipped there. Another, who is most likely UK bound also was the richest possible liver chestnut - a colour I've never seen on a Standardbred. The owners were very welcoming, toured us around and then invited us into the house for coffee and apple fritters. My brother was super impressed as such a visit would not have been so warm in the UK.

Welcome to Barnmice and our little group. As you no doubt noticed, the group is very small - not a surprise, and not very active - also not a surprise. I had the best of intentions starting the group, but now it seems we actually have less to talk about than I anticipated.

I guess I just get tired sometimes being the only guy in the barn, and the only guy I know personally who even rides. At local shows, I occasionally see a male trainer/coach working with a competitor, but they seem very unfriendly and unapproachable. I don't know what that's about.

I don't compete, but I attend quite a few dressage events here in South Eastern Ontario, and I have had some dressage training in the distant past.

My primary riding activity is trails and pleasure, with occasional forays into the arena - outdoor or indoor depending on the weather for training and refresher rides. My horse is a retrained standardbred. I never set out to have a standardbred but after I started volunteering for the Ontario Standardbred Adoption Society, it was suggested I should "walk the walk" and luckily there was a horse that the (then) coordinator of the organization said was the one horse in the program she would personally choose.

He's a really good horse - does everything and is incredibly responsive. He's also not one of those old fashioned clunky headed standies, which is good as I am more used to thoroughbreds and warmbloods. I love him a lot and we ride together four or five times a week, sometimes even every day.

I looked at your blog, but didn't have time to read much yet. I will. I did pay attention to the food items - the salad recipe and your breakfast sandwiches. I guess weight and body image are issues for many of us and I'm so aware that the major international dressage riders are almost always thin - like Edward Gal. Why can't I look like him?

That reminds me of a topic I have had a chance to discuss with a couple of guys, and that is where do major male competitors come from. They seem to pop up out of nowhere. As the husband of one of my contacts said "they certainly aren't in Pony Club".

I am a handicapped (MS) Forward Seat rider ala Littauer.  I really liked your blog on Stabilization!

I look forward to your contributions on Barnmice.