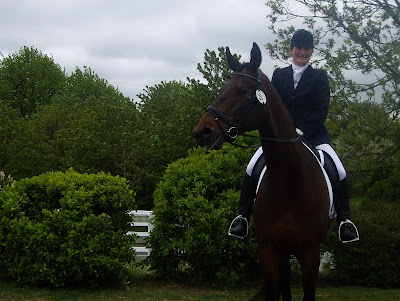 One of the riders I started teaching this year has bravely agreed to be a Case Study for the Academy's BHS Programme :) Alice works as a head girl at a livery yard with a dressage focus, has her BHSAI and is now training towards Stage 4 exam. As many other instructors she has spent more time focusing on others than herself as well as not having much decent practice for a while so she decided it's time to iron out all the bad habits. She is giving herself a year to reach the level required and you will be able to follow her progress via here and Aspire Equestrian's blog.

My main focus with Alice is her seat, effectiveness, her understanding of the training and most of all - the show jumping phase of the exam. We have some confidence issues to work on after a bad fall as well as general jumping training which Alice hasn't been doing much lately.

We had a little set back after our first session a few weeks ago as Alice decided to play with some horses in the field and got kicked in the shin! I think it was as painful as it sounds! The incident resulted in some stitches but thankfully no broken bones. She had to have a break from riding for a short while but is now slowly getting back in the saddle.

Part of Alice's training on Academy's Programme is being videoed. A lot. Minute by minute footage can be rather painfully honest and many problems become very clear when you hit a few pauses!
Alice has a typical "working rider" way of riding which many riders acquire super quick when schooling without any supervision or eye on the ground. However, she is the sort of rider who is fantastic to teach as there is very little I have to explain twice and very little I have to ask for twice. she is a hard task master so we get on just fine ;) 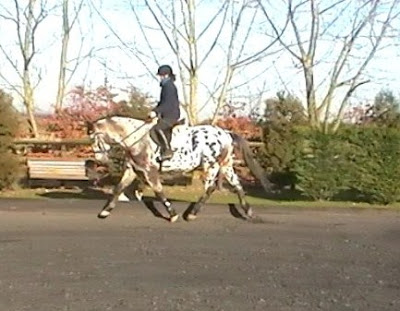 Session 1. January 2011. Alice is warming up for jumping here and I do like the slightly forward position with the upper body she is showing here. She has a nice straight line from elbow through the hand and rein and into the horse's mouth and she is carrying her own hands well. However, she is a holding her balance through the thigh and knee which causes loss of the seat depth and loss of an anchor which is her lower leg. A big no-no for jumping and something we've started to address already. 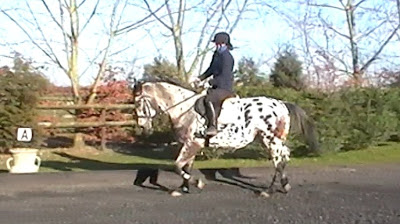 Session 1. January 2011. This photo shows Alice a second before the horse departed into canter. She is asking for a transition here but because the horse is behind the leg and lacking energy she is having to work hard for it. She is using her inside leg so much that her whole body collapses on the left, she then loses her outside aids and viscous circle starts. It's not easy for a small rider to be effective on a wide horse that is behind the leg so we are addressing this issue in two ways. 1) She is going to see Kari to put together an exercise plan that will help with muscle imbalances and asymmetry as well general biomechanics 2) She is learning to be less forgiving when a horse loses forwardness so she can correct it earlier in the session. The bigger, wider the horse the lighter he/she has to be on a small rider's aids otherwise schooling turns into bullying...
The photo here also shows how pelvis and upper body imbalance immediately influences the contact - although the problem is enlarged in this particular situation and Alice did many other transitions much better, the balance-contact issue is another task to work on as it surfaces often in milder form.
I left Alice with some homework to work on before her next lesson but we were to wait until today when she could ride again. First I was away in Norway when we should have had our training day and then she got herself kicked! She managed to practice in the meantime though and I was very pleased with the corrections she made already.


Session 2. 18th February 2011
Here Alice rides a young mare with balance and contact issues and she is working on using her seat for transitions as well as for balance. The main focus was on the way her seat bones join the movement of the horse to achieve consistent rhythm and how her upper body and arm/elbow/hand position influence the mare's balance. Alice has a tendency to get a little "handy" and overcorrect with the reins so we are working on making her realise she actually has enough "tools" in the seat not to need the reins so much :)

The mare is sensitive and not very forgiving of Alice's mistakes. The shortened walk steps you see were asked for on purpose where Alice was practicing influencing the length of the steps with her own hips rather than the reins. Alice's tendency to lose the outside contact, especially on the right rein caused her some trouble with this horse.
Despite the difficulties she made a grand difference in the horse within the session. Lack of stability in the hand carriage can have many causes and we need to get to the bottom of upper body weakness to eradicate this fully but I am impressed with Alice's corrections so far.  If you have a bad riding habit I am sure you will identify with how hard it is to get rid of it!
If Alice gets all clear from her doctor we should be able to resume jumping again next week.

For the last few years Alice have been leaving the floor reluctantly and is very rusty whenever the show jumps come out. Apart from getting her up to scratch for next year's exam as far as ability and technique goes we also need to work on Alice's confidence and determination to "make the jump happen".

As you will see on the video below there is still a long way to go before Alice is where she wants to be with her training but watch this space!

Today Alice rode Dobbin, a lovely looking bay gelding competing at BD Elementary with his owner and training Prelim/Novice with Alice. He is a big moving horse who has no real desire to leave the floor, has very little respect for poles or jumps and proved difficult to keep together by a small rider like Alice. She forgot to wear her spurs which contributed to many problems she had today but in the same time it gave her a wake up call to be prepared next time!


From my show-jumping experience most of the confidence issues as well as "distance/stride" anxiety comes from inability to create the canter that can jump a house...If you ask an event rider whether they would like to go around Badminton even lower level riders would say 'yes but on a horse that makes it easy'.

What makes it easy is the feel for the "jumping canter". One that is neither too fast nor too slow, powerful but controllable. Some riders can create really nice pace on the flat but everything goes all over the place once poles appear. Some will start overcorrecting, "looking for stride", kicking on as if the 10 inch cavaletti was at least 1.40m jump and all this shows lack of confidence in the horse's canter.

This is also part of Alice's problem and this is why we are addressing the basics rather than building 3ft6 courses she will have to jump at the exam.

I am very strict about how the rider rides the canter and how they direct the horse in between the jumps as the better they can do it the better the jumps will be. Style in jumping is not so it looks "pretty" but so the horse has all the chance in the world to clear the fence and enjoy it too.

For those of you who are awaiting watching Alice over bigger fences you might have to wait a while. Before she can ride all the horses she has for training as if they swallowed  a bouncy ball she will not be flying much higher than 60cm.

The added difficulty every BHS candidate faces is that they have to ride an unknown horse and show both the horse and themselves the best they can. It might be that you are 5 foot something and 8 or 9 stone ending up riding a chunky 16.3hh horse that is normally ridden by someone much larger and stronger. The rider has about 15-20 min the most to "tune" the horse to themselves...this includes practice jump.

Today Dobbin was very much in control of what was happening, not Alice. She actually rode him well at the end when I wasn't filming but we need to make sure she can ask for more self-carriage in the canter in 10 minutes not 50 minutes.

When we sat down to discuss the videos and the homework Alice was very good at pinpointing areas to work on.

The two biggest issues Alice had with this horse today were:

- keeping Dobbin in font of the leg

Other issues were just by-products of the above.

Photo: Good upper body angle, straight back and seat close to the saddle but lower leg lacks stability which causes the rider to grip with the knees and thighs and lose balance on landing.

The things we are working on with Alice in first instance are:

I left her today with 2 simple exercises with poles (to practice the feel for rhythm and to passively train her eye for distance)  as well as seat exercise to work on her asymmetry.

She doesn't know it yet but March training plan is very intense...feel free to leave a comment for Alice to let her know what you think about her efforts!