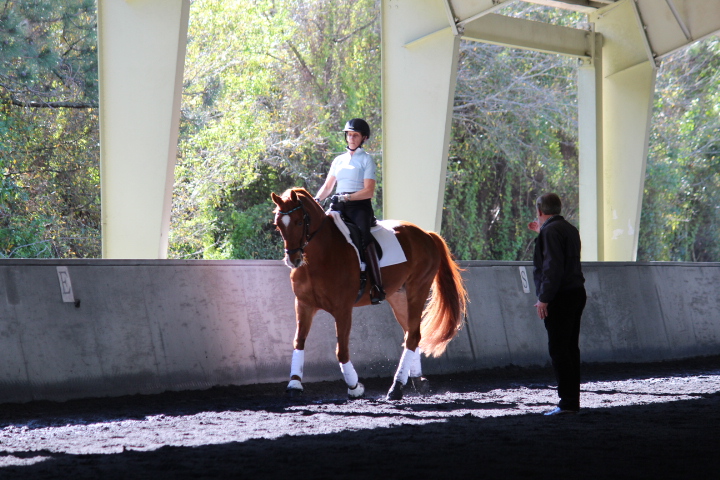 My Florida coach Luis (Lou) Reteguiz Denizard brings Henk van Bergen to his farm for clinics and I am lucky enough to be able to ride with Henk while I am there in the winter season.  Henk van Bergen has a considerable history as a coach and trainer including having been appointed as the Dutch National Trainer in 1988. At the 1992 Olympics, under his guidance, the Dutch took the silver medal in dressage.  The first time I saw Henk he was the clinician at the FEI Trainers Conference in Florida.  Then when I came to Lou’s farm to train in the winter I started to ride in the clinics.  I found Henk was a marvellous teacher; patient and encouraging and with an eye for just what I needed to know to improve my horse. I rode in the clinics for several years with my Dutch Warmblood horse Tommie.  Sadly I lost Tommie and last year I rode for Henk with my new horse Biasini, a Hanoverian gelding.

The first day I rode Biasini Henk was basically finding out about this new combination. On the second day I rode a flying change with a rather slack focus and WOW did I hear about it! So I knew I had to step up my game and pay attention. At the end of that lesson Henk said:  “This is a very good horse. So you must work very hard. He is a good school master because he will not do it right unless you ask him the right way.”

So this year I knew in advance I would have to bring my A Game to the clinic. Training at home in Ontario with Belinda Trussell and in Florida with Lou I knew we had made good progress but I also knew I had to do my best to show that to Henk and not let down my horse or my coaches.   The first day went very well. Henk said he had nothing to say about my warm up as it showed everything he wanted to see. We then moved on to working on the half pass. “The inside rein must be soft” he said. “ If it is not soft in the corner before you start the half pass then take a shoulder in position to start the half pass and get that inside rein soft and then go on to the half pass. Otherwise it is not possible to get the bend and the sideways movement. “ 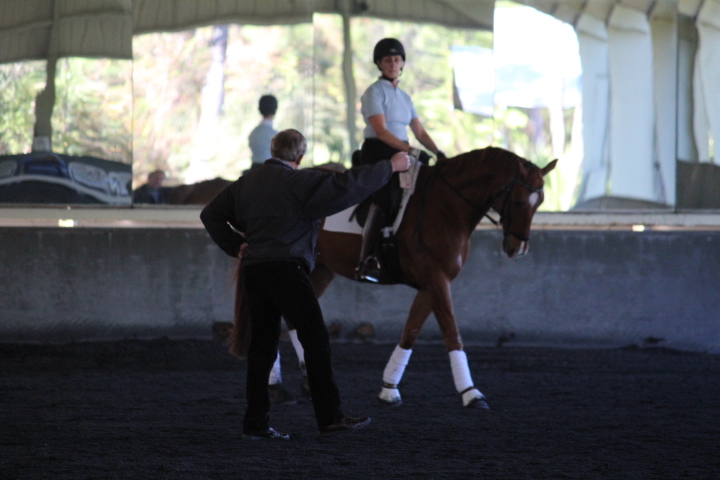 He also reminded me that not too much flexion is needed. The outside leg asks for the sideways movement but if the inside rein is not soft then as Henk puts it: “It is like riding with the hand brake on.” That was a perfect image for me and it certainly helped my half pass work.

Later in the day I was watching Henk teach Lou on his Grand Prix horse.  Henk reminded us that a horse that can do all the Grand Prix movements is not a Grand Prix horse. A Grand Prix horse must have the strength, precision and balance and be able to put all the movements together in a sequence right the way through the test and all the way down the final center line.

During a break he spoke about the importance of the walk. He had spent two days at a 5* judges conference in Wellington before coming to Lou’s for the clinic.  He told us that they had discussed the walk and that some show organizers want to eliminate the walk from the tests as it is “slow and boring”. But in Henk’s opinion the walk can reveal a lot that can be concealed by the rider in trot or canter. “The collected walk is an important part of the test and of the sport of dressage.” He told us.

On the second day of the clinic Henk greeted me by saying: “I could just sit there and give you compliments but when it goes well as it did yesterday then we must move on.” Needless to say I took that as a compliment for me and for Biasini.  We then began work on the quality of the trot working for more cadence and more swing through the back.

“Slow the trot down; he is a very forward horse. You don’t need to get him more forward.” He said.  We then worked on the half steps. At the start Biasini kept one eye on Henk, who had a whip in his hand, but then settled into the work of the half steps and did very well.   “Position and rhythm”, Henk told me “that is how you find balance.”

Lou always organizes an evening out for dinner with Henk and many of the clinic riders join in. I arrived at the opportune time as I was able to sit next to Henk. I spoke with him about the Judges Supervisory Panel (JSP) of which he is a member. The JSP is present at the Olympics, World Games, continental Championships and World Cup finals.  At each of these championships the JSP will be composed of three members; two 5* judges and one trainer or athlete.   The JSP must have a clear and unobstructed view of the entire arena.  They all have monitors that follow the horse and rider and display the scores they are receiving from the judges around the arena.  Henk told me he watches a monitor and speaks out if he sees any technical mistakes or counting errors. . The two judges then can see on their monitors if the judges on the ground have noticed this error and accounted for it in their scores. If an error has been missed the JSP can correct the scoring. A signed form with the correction will be attached to the normal test sheets and made available to the athlete and also given to the judge whose mark has been changed.  As well as this the JSP will review the final scores. If a final score is 6% above or below the scores of the other judges for the same horse and rider, the JSP may, by unanimous decision, change the score to be the same as the nearest score of the other judges.

I asked Henk if he would be going to the Olympics in Rio on the JSP. He explained that the members of each JSP are chosen on a rotational basis and it was not is turn for Rio. He would be doing the European Championships but not the Olympics.  He said he would have liked to go. He enjoys the JSP work and it is not nearly as stressful as he found it when he was the Team Trainer for the Dutch team at the Barcelona Olympics. The Team Trainer works for four years and then in one day it is over …for better or for worse. For Henk and the Dutch team it was very much for the better as they won the team silver medal, an historic first.

To ride in a clinic with a coach and trainer of Henk’s stature is an honor. To have him give me the benefit of his very considerable knowledge is a gift to me and Biasini. Every time  have ridden with Henk I come away with some gems of knowledge that I can apply to my riding and if I do this I know I will be moving ahead on the right path. 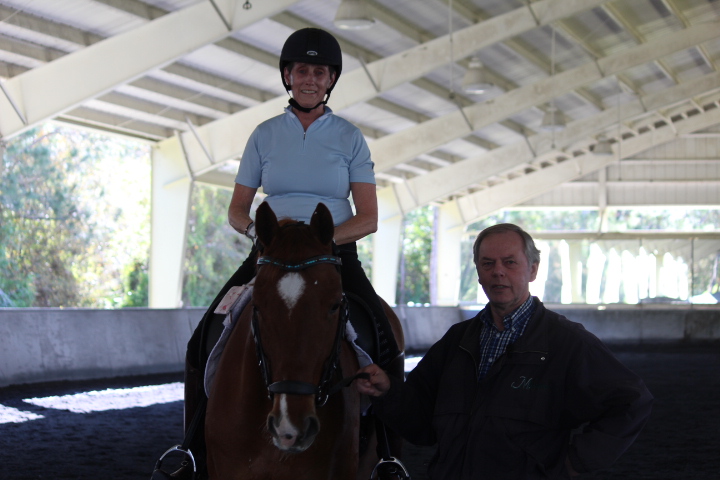