The Horse and Hound is the most prestigious equestrian magazine in the UK, the equivalent of the Chronicle of the Horse in the USA. I was writing an article on horse breeding for them, including details of the ‘Holstein’ stallion Cavalier Royale, the Irish based stallion that has produced so many top class event horses, including World Silver medallist and winner of Rolex Ben Along Time and Mary King’s wonderful international pair, Call Again Cavalier and Imperial Cavalier. Their breeding editor returned my copy with a number of small changes, including deleting the fact that Cavalier Royale was half thoroughbred. I reinserted this fact and it was duly returned once again, deleted!

What is also fascinating is that the thoroughbred genes of Cavalier Royale include those four thoroughbred gods of the warm blood world, FURIOSO, COTTAGE SON, RANTZAU, & LADYKILLER. Remember these names because, together with a fifth, LUCKY BOY, there is no statistical doubt that these five thoroughbred stallions are the equal of Northern Dancer and his son Sadlers Wells in the racing world. They are more influential than any other sires of any breeding in the jumping world….and they are thoroughbreds:

FURIOSO – (Born in Ireland 1939, stood in France) More than 50% horses in the top 20 show jumpers at the World Games in Aachen and the Olympics in Athens go back to the legendary TB Furioso. Furioso was by Precipitation, also sire of the famous Irish show jumping stallion Prefairy. Sire of supersire Furioso 11. who was himself sire 81 approved sons and 96 dams of approved sons, including the great jumping sires Voltaire, Le Mexico, For Pleasure (Marcus Ehning), & Purioso, sire of Anky Van Grunsen’s Dressage Gold medalist Cocktail. COTTAGE SON – (Born in Ireland 1944, stood in Germany) Just as many show jumpers trace back to the Irish TB Cottage Son as to Furioso. He has made a huge impact on German warmblood breeding and was from the family of British Grand National winner Sheila’s Cottage and triple Cheltenham Gold Cup hero Cottage Rake. Sire of Valine the dam of supersire Ramiro Z (sire of Ratina Z), and of Viola the dam of the ubiquitous jumping sire Lord. Grandsire of Christine Stuckleburger’s dressage champion Granat. What is truly amazing is that he achieved all this despite being at stud in Germany for just four years. 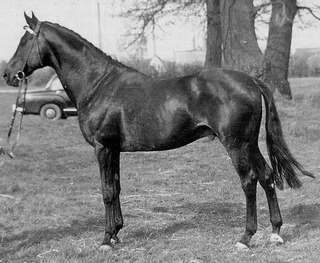 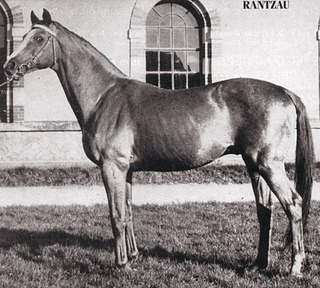 LADYKILLER – (Born in UK 1961, stood in Germany) Ladykiller, sired 35 approved stallions and 195 approved daughters and dominates Holsteiner pedigrees, that are the most successful in show jumping, to such an extent that those without his name are becoming rare. He has become the superstar influence in all the European stud books. The point is that the genes of these horses all contain the classic bloodlines of the best jumping thoroughbreds from the racing world, which in turn come from flat racing. In other words the huge success of these five Gods of warm blood breeding is not a total fluke… nor was the success of this additional group of over 250 hugely successful thoroughbred sires (with multiple advanced international sons and daughters or grandchildren within the last 50 years) that I list below…. I just want to emphasize how many very important TB sires there are in the modern sport horse world and, amazingly, how they are mostly related. Most sired top performers in more than one discipline. NB This list is certainly not exhaustive but I haven’t finished my research:

What is interesting is to also present them in date order. In the twenty years after the second world war the German and Dutch breed societies made a conscious decision to import thoroughbreds to cross with their native mares to produce showjumpers, but the big question remains …. is the decline in new TB sires the result of more quality part bred sires being available (largely the sons and grandsons of the thoroughbred sires in this list…in particular the sons of the five GODS of the warm blood world), or the result of the success of the marketing policies of the breed societies, or a little of both? Some would say that the right thoroughbred types are no longer available, but the conundrum is that all the disciplines are moving towards more quality horses. The success of TB sires born in the 80’s would suggest that there are now new openings and open minds for the thoroughbred in all disciplines….if we could find the right ones!

Quite a gathering I think you’ll agree …I wouldn’t mind a couple waiting for me in our front field…and I still have much work to do especially with Australian and New Zealand thoroughbreds. These stallions all have some common ancestors which can be a real help in evaluating the breeding of new sires.

So what are the common ancestors of the above 5 TB Gods of the warmblood world and the other 70 sires? I won’t bore you with too many details and too many sires, but going a long way back there are ten names in particular that should seriously brighten your day if you find a liberal sprinkling of them on BOTH sides of the back pedigree of your horse:

...and 10 more slightly more modern thoroughbreds which connect to these sires...

For example my own stallion JACKAROO (2007), a full brother of Karen O’Connor’s Mandiba, has 39 crosses from this list of thoroughbred sires, only missing out on Orange Peel….and I emphasize that my suggestion is that we benefit from the very special mental qualities handed down by these horses as well as the physical qualities. The 15 great thoroughbred sires with names in capitals above do it all, mentally and physically….they are a truly golden list …..and a high proportion of their families really jump.

...but preeminent in this breeding is the cross of Hyperion with Pharos or Fairway, togetherwith crosses of Precipitation and Tourbillon.

Top Irish show jumping stallion, the ‘Irish Draught’ CLOVER HILL (1973), was in fact half thoroughbred, being by Golden Beaker. Golden Beaker’s sire had crosses of Chaucer, Bay Ronald x 2, Pharlaris, The Tetrarch, and Blandford, while his dam had two crosses of Hurry On, making him a good choice as Clover Hill’s sire. I just wish Golden Beaker had been performance tested as a youngster and had his jumping ability assessed. He might have been found to be great and more use made of him because of this.

Both because so few thoroughbreds are properly performance tested, and because many riders are unaware that many top horses have a majority of thoroughbred blood, it has become common currency in show jumping breeding circles to say that the thoroughbred is not good enough for world class show jumping. Yet three of the greatest show jumpers, World Champion JET RUN (1968), Olympic Gold Medalist TOUCH OF CLASS (1973), and double Silver medalist and top rated jumper in the world GEM TWIST (1979) were all full thoroughbreds. As far as show jumping is concerned the statistics are solid with regard to the role of the thoroughbred, even in modern times.

In addition to the multiple World Cup winners, BALOUBET DE ROUET (1989) & SHUTTERFLY (1993), that I mentioned earlier, that are at least 50% thoroughbred, just look at this list of showjumping royalty and note their % of thoroughbred blood….

So if you are interested in elite performance double check that the horse you want to buy or cover your mare with has enough thoroughbred blood… because many don’t.

Finally there is a statistic which casts serious doubt on the line breeding claims of many jumping stud books and the cry from the warm blood world that you can’t find good thoroughbreds any longer….three of the four show jumping finalists at the Aachen World Games (2006) were out of daughters of TB stallions! Happy days for breeders of quality horses.
William
www.WilliamMicklem.com

Next week….Part 4…the truth about Headley Brittannia’s husband and the connection between top dressage and jumping breeding.

The beauty of a horse, or a horse and rider, moving athletically and happily is what gives me most pleasure.

The Thoroughbred, the most elegant, intelligent and fluid horse.......has found its way into the hearts of those who choose to bad mouth the breed..........that is Karma for sure/

The important thing is that you love her Joan...lucky mare...W

Just a short note .... that i am extremely happy with my own Cottage Son descendant! Lavendel, 18 years of age now, granddaughter of Cottage Romance and Landgraf I. Nobody was aware of the fact that she has this incredible bloodline! To bad she's to old to have a foal!

I got on this website, searching for more info about my horse and was pleased to read your blog!!!!! My horse, who i love dearly, has famous ancestors! I knew she's special!!!!

To bad i have little knowledge about bloodlines and famous horses, but i'm starting to get more and more interested!

Comment by William Micklem on March 29, 2010 at 3:48pm
You know the truth of it....and you obviously love the results...William

Comment by Joy Lunn on March 29, 2010 at 1:55pm
I used to ride for a woman in thr 1970s, her 7/8tb leopard spotted stallion was only 15.1 yet she jumped him in the Grade C Championships at Wembley and his sire was Precipitation making him a half brother to Furioso. All of his offspring jumped, whether out of Exmoor or Fell mares, thoroughbreds or unbroken Irish cobs these animals jumped.
She also had a brood mare with April 5th bloodlines which she took to St George a TB imported back from Germany and the sire of Lucinda Greens great European champion George.
The horse in my siggy is home bred out of a Welton Wilful (Welton Louis sired) mare by Irish/American TB Merit. He jumps!!!

Comment by William Micklem on August 11, 2009 at 2:23pm
It was put up last Friday morning Lisa...hope you can access it...William

Comment by William Micklem on August 5, 2009 at 11:53am
Thank you so much for your contribution Gail..you obviously know your stuff...overall Nearco's sire Pharos, his full brother Fairway and their sire Phalaris made a bigger contribution when one looks at all the European sires, but Nearco is certainly right up there and I tend to just include him in this family. Will get to work on the rest to check on their sport horse international credentials. Thank you again Gail...it is such a big subject and your expertise is appreciated. William