We brought him in and saddled him, worked on a couple of little things that he has well down to get him paying attention and led him out to the pen we were using. No round penning or working him until he was paying attention (read dripping sweat and too tired to do anything) just a few cookies and simple cues and he was ready to go. I’m really liking this clicker training.

Tanna held his head and I got on off the fence, just like always. She led him forward, I clucked and squeezed and we walked in a nice circle then dismounted at the fence. I am firmly not a believer in working them into a lather on the first ride. Why not make it fun and easy? But I wanted to do so much more than that little circle. I restrained myself for the most part but with lots of rewards and encouragement I got on again and we walked, were led I should say, to the middle of the “arena”. I asked him to yield his hindquarters both ways then got off on the ground. He gave easily to the softest touch and stood perfectly still for the dismount.

I thought we should stop there he was being so good. But I wanted to ride him so much more than that so I constrained myself to one more little ride. A nice sized circle and giving to the reins both directions then dismount on the other side. And that was it. He took the whole thing like a pro and I can barely wait to do it again!

I really wanted to write this whole thing with exclamation points, notice how restrained I am? Of course there are no pictures, we were a little busy with other things. There is also absolutely no place to set the camera for video. I really wanted to get his first ride on film. 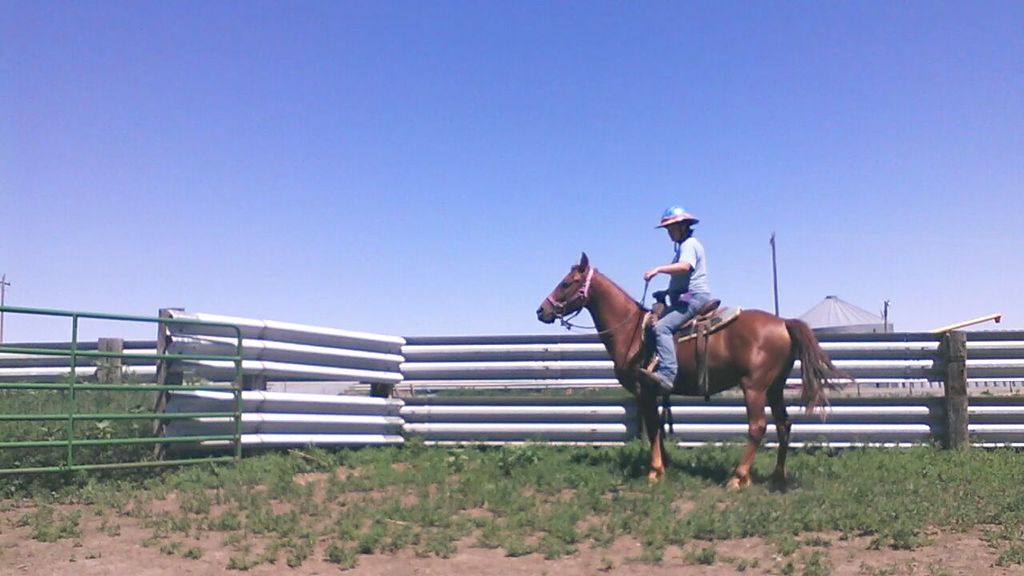 That is a good start.

Over the last decade I have become a firm believer in starting out slow.  Training is NOT a race to a destination.  I work on the basis of the "6 month walk", with the ring work done in deep(ish) sand.  Occasional short slow trots are fine in the ring.  Outside, any hills you can find, however short or mild the rise.  The six month walk gives the horse plenty of time to grow stronger in his back and limbs, it gives the horse plenty of time to figure out how to carry the weight of the rider comfortably, and it gives both horse and rider plenty of time to agree on a common language.

Keep up the good work!