Thankfully they Horse Show gods decided to move the classes up from early afternoon to just before 11.  In my naivete, I thought that meant I was gonna get out of Dodge early.  HAH!  Every pony east of the Mississippi was competing in that class and it lasted FOREVER.  The division pinned something like four hours after it started.  Really.  I've been known to exaggerate.  A LOT.  I'm not doing it now.

In any case, the hunter classes are not Cookie's strength, and since she is 15 now and coming back from a broken splint bone and time off, lead changes can be iffy at best.  She will, however, sometimes land on the right lead if her pilot gives the correct cue.  Sophie and her trainer had been working diligently for some time on cueing Cookie to land on the correct lead.  So, on the way to the show, I decided to share with the pony pilot some advice I'd first heard while auditing a Peter Leone  clinic and then in his DVD Ride the Body.  It made sense to me, and seemed to work whenever I remembered to use it.

Peter advocates "blocking the shoulder," which I interpreted to mean keeping your inside leg up at the girth (in a sense by the shoulder) to suggest the inside bend, which seems (again, to me) to leave your outside leg back a tad  to cue for the correct lead.  So, in 9 and 1/2 year old language this translates into "make sure your inside leg is forward enough to tickle your pony's elbow and add that to what Annabel tells you about cueing her with your outside leg."

Things were working fairly well landing on the right lead, but the left hind is where the pony broke the splint bone, and landing left was still presenting a problem.  Just before Sophie's last trip I could see she and her trainer having an intense pow-wow, and sure enough, Soph trotted into the ring with her Ultra-Serious Game Face on.  She landed her right leads, and the moment of truth came as she headed across the diagonal towards a green vertical with yellow flowers.

I could see Sophie set her pointy little jaw from my vantage point in the stands, and as Cookie left the ground it was clear that she'd just been given a very definite aid from her rider. That pony darn near leaped out of her skin going over that fence!  Yellow flower heads went flying, but danged if Cookie didn't land on her left lead.  Of course, she landed a bit peeved with her jockey, so the pair cruised down the last line with a bit more pace than was necessary, but so what?  Mission accomplished!

When Soph and I talked about it later she said Annabel had told her that they were going to get that lead no matter what, and she was to tell Cookie in no uncertain terms with her outside leg which lead to land on. She said to me, 'Mom, I did what Annabel told me and I added that shoulder tickle thing you told me about, and we did it so well we knocked all the flowers off!"

This is how she did: 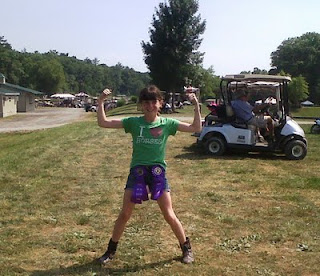 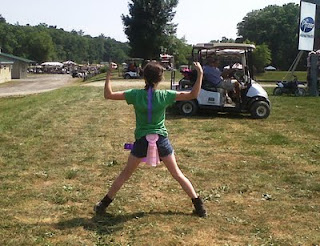 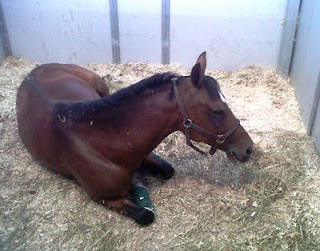