Florida: bugs and bites the Northern horse may not be used to

Florida: bugs and bites the Northern horse may not be used to.

Spending the winter months in South Florida is certainly luxury. I have been bringing a horse down here for eight years now and I really enjoy it. I think the horses enjoy shedding their winter blankets and getting turned out on some grass in the sunshine.  But there are some things the horse owner has to be aware of.

First of all since Florida has mosquitoes year round the local vets here recommend vaccinating for the mosquito borne diseases such as West Nile, Eastern and Western Encephalitis before the horse comes to Florida. Once the horse arrives in Florida the bugs abound and there will be bites and bumps and little rashes. My horse, Biasini, is a very sensitive chestnut and has reactions to bug bites in the summer at home in Ontario. When he is in Florida I have him in a fly sheet a night, a fly mask for daytime turnout and also he is sprayed with fly spray before turnout. I do not have him in a fly sheet for daytime turnout as I have found he seems to get the most bites at night. If I find he has a bigger bump from a bite I will daub it with witch hazel. This year he has arrived in Florida and has numerous little bites. Fortunately he does not seem to find the bites itchy. This year it is above normal temperature for the winter and I think the bugs are thriving on it.

After riding I always hose him down. He has a full clip but it is so warm that he will sweat and need bathing. I also always wash his lower legs with soap and water in case there are any little nicks or cuts.  Once he had been towelled off I spray him, over his entire body apart from the head, with lineament. Some of the Florida locals also spray with vinegar which is also effective. This can help with the bites and bumps as well as somewhat disinfecting any small bites that may be open. I examine Biasini carefully to see if there are any cuts or wounds or bites that look suspicious.  The reason for this vigilance is to avoid summer sores. What are they? They are ghastly things that people in the North know nothing about. But if you are coming to the South it is important to know how to recognize them.

Last year a couple of weeks before we were to go home I was grooming Biasini and noticed that two flies were hovering around the corner of his mouth. That struck me as odd so I called my coach, Lou Denizard over to take a look. “That’s not good,” he said.  He immediately got some ivermectin and rubbed it onto the spot where the flies had been. I was very careful over the next two days to keep it clean and rub in more ivermectin.  I also rode in a hackamore to avoid any problems with the bit next to the tiny sore.  There was a small dry scab that had formed and I thought I had it under control. Wrong! On the third day there was a pinkish fluid leaking from the sides of the dry scab. On Lou’s advice I called the local vet Dr. Fullana at Harbour Ridge Equine.

Dr. Fullana told me it was a summer sore and it would have to be cut out. So he gave Biasini a local anaesthetic and cut out the small sore which was about the size of a dime. He packed the wound and prescribed antibiotics and a course of Ivermectin and a triple antibiotic cream. Then he told me to take a look at the little piece he had cut out of Biasini’s lip. The side that was facing up looked like a dry scab. Then he flipped it over. It was a tightly bunched little group of larvae. Not a pleasant sight! The photo I have attached shows another horse with a summer sore in the exact place that Biasini had his. Summer sores are known as habronemiasis. This is a non-healing skin lesion caused by the presence of larvae of the habronema worm. This worm lives in the horses stomach, lays eggs that are passed in the horses manure, which the horse later ingests and they travel to the stomach and after two months mature into adult worms that usually cause little damage. But if the journey of the larvae is not exactly right then the problems can occur. The larvae are picked up by flies and if they are deposited into a wound or anywhere on the horse where there is moisture the larvae cannot mature into adults and so they migrate into the wound causing inflammation and itching. The larvae can be deposited into a wound, or the margins of the lips, the sheath or the corners of the eyes; any area that is moist. This photo shows a horse with a summer sore on his heel. This may have started as a tiny nick or cut that got infected with the larvae. 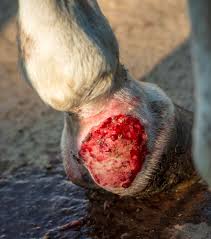 In recent years it seems there has been an increase in summer sores which may be caused by resistance to wormers such as ivermectin and moxidectin but there is little documentation to support this. The increase in climate temperature may also be a cause.

Once Biasini had the sore removed the difficult part was to prevent any flies getting at the area. If the sore is on the leg it can be wrapped and kept dry to keep the flies away but keeping the side of his mouth dry was very difficult. I devised a fly mask with a long nose cover and also an extra piece of fabric covering the sides of his mouth. This was only partially effective. I also used a spray that gave a metallic shield but that would wear off as he ate and drank. However with the help of the barn staff we did our best. After a couple of days the wound looked like cooked hamburger meat but it was no longer oozing. Dr. Fullana returned and debrided the wound and gave Biasini an injection of corticosteroid to reduce the inflammation. For the rest of our time in Florida I would stick my finger into the wound and rub it with rough gauze to debride it and then apply the antibiotic cream and then spray on the shield spray and then put on the fly mask. Fortunately he did not get re-infected before he went home to Ontario. I kept up the treatment for a couple of weeks once he got home to make sure the healing continued. Luckily it did and now all that is left is a slight scarring which I can feel with my finger.

Summer sores are the very devil to treat and to cure. This is why it is of paramount importance to carefully observe any wounds and nicks on the horse so that if a summer sore is developing at least it can be quickly treated.

I hope that this will not put anyone off going to South Florida for the winter months.  The opportunity to be in the warm weather and to train and compete is well worth any risk of summer sores or insect bites. But it is important to be aware that this is a very different climate for a northern horse and it comes with different challenges.