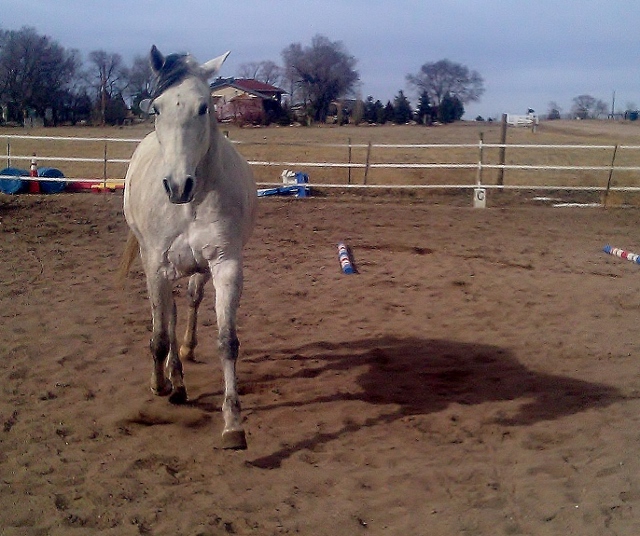 This week, I attended Cavalia, the Cirque du Soleil-inspired performance event combining horses, acrobats and dancers. There were beautiful horses, an outlandishly great live band, and a stage that altered time and space. Unrecognizably. It’s the largest traveling show in the world, mind boggling in it’s scope. And yet, there were moments so heartfelt and impossibly beautiful that they will be forever intimately tattooed on my brain.

Disclaimer: This isn’t a review. And generally, I am not much fun at equine events. I can never just look at the pretty because the language of the horse is always louder to my ear than anything else. We don’t always put the horse first. I say it enough that my clients mock-lip sync along with me, “I work for the horse.” It makes me a party-pooper on Kentucky Derby Day.

So I am about to give Cavalia the biggest compliment that I can: For the most part, the Cavalia horses seemed happy. The liberty segments were by far my favorite. In our world of controlling horses into a human frame of obedience, there was an overwhelming feeling of natural freedom, watching as over 30 horses galloped at liberty, tails-flagged and moving as a herd with their humans. Equine personalities were more individually obvious than the humans were, as if everyone agreed the horses were the stars. There was a generous spirit of partnership and volunteering on the part of all of the performers. Quite an accomplishment!

Not to take anything away from Cavalia‘s ethereal performance -at the same time, moving as a herd is a horse’s first language. Mares teach it to their foals on day one. It’s about the most natural thing to do with a horse. Training a horse never negates this fundamental species trait and insightful trainers have found methods of supportive and kind partnership using the language of the horse, since Xenophon, (b. 430BC) said this:

“For what the horse does under compulsion… is done without understanding; and there is no beauty in it either, any more than if one should whip and spur a dancer.”

Humans can get in a hurry. We’re born dominators, it’s hard for us to listen. Some of us think that a horse is not capable of doing advanced work without intimidation. In my experience, it isn’t true. But it’s us that has to change. We have to give up control for cooperation.

Do you and your horse do ground play? I don’t think there is a better tool for building a relationship with a horse. It’s something lots of us did as kids before we had a name for it. We went into the pasture and pretended to be horses. Remember? I am always surprised at the resistance riders start a ride with some of that now.

Maybe the term ground work has a bad connotation? You know that this kind of horse interaction existed long before there were videos of trainers waving trademarked sticks at a horse’s face, right?

Natural horsemanship is a relatively new name. At the beginning of this trend, a friend of mine had a thought that intrigued me. She said she saw the benefits of ground work for starting horses, but she wanted to know how it benefited advanced dressage horses. It’s a question I’ve been asking my horses ever since, with huge success. It can seem like there is a fundamental disagreement between the disciplines of dressage and natural horsemanship, but to me they are the exact same thing. The disagreement is more about technique than anything else; it’s really over the definition of leadership. One side believes domination is required and one side says, “Let’s dance!”

Just give it a try. In the beginning, you won’t make the exact same performance art impression as Cavalia. Riding to the music on your smartphone isn’t the same as having a private orchestra and if you have an arena, it might not have mood lighting. You probably don’t have a flowing costume that glides with magically in the air. Your horse might have a manure stain here or there. Maybe you’re bittersweet, being at an age where some kinds of riding are behind you. Or maybe you’re a novice rider and still a bit nervous about the canter.

WHO CARES? You have the same timeless dream in your heart.

Get inspired! Get carried away with Cavalia, they are art and magic. And then take some home to your horse. If that isn’t possible, find motivation on YouTube, or in your own pasture. If you lack youthful exuberance, make up for it with wisdom and patience. Not to mention a good helmet to protect your valuables. Sure, it means that there are some cues that we take from them. Learn to speak with your body and watch for an answer from him.

Expect that it might go slow at first but at the same time, know that both you and your horse are part of a rich and valuable tradition, handed down through history. Even in your own round pen, you share in the beauty and freedom that are part of the ageless conversation between a horse and a human. With no apology or intended disrespect, know that you and your horse are Cavalia, too.

Celebrate today by letting that lead rope go and suspending your own disbelief. He’s waiting for you to ask him to dance…