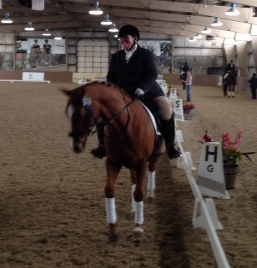 Ah, little Mo.  She's really quite a cute thing.  I flew home on Thursday night, Friday morning, I worked the boys, then it was time (well, two hours past where I wanted to be), to take Mo over to the show and school.  Tack box in the trailer, Mo walked up and tested me... are you going to try and pull me into the trailer?  Not a chance Missy.  Slack lead rope the whole time, she put one foot on the ramp, *testing*testing*, two feet on the ramp *test*are you gonna*test*, one foot in the trailer *surely you're going to pull*... oh hell, and on she went.  You really actually have to get the hell out of the way once she's coming in.  And on she stays... A requirement of my horses, you get on the straight load and you stay there while I meander around and put up the bum barn.  Period.

So, we get there, unload everything, and into the ring to school.  I red ribbonned her because it was our first time out, and I know she will kick in a paddock, she hasn't as yet under saddle.  But, I'm a better safe than sorry, can't say I didn't warn ya kind of gal.  She actually schooled pretty well.  She did THROW her haunches left at one point, it was a test of whether I was going to be able to catch her (ie: do you have a whip up there?), touch touch, yep, I do, get back over there... no problem.  Now right after I started trotting her, another horse bucked her rider off and went gamboling about... still, no biggie for Mo.

Throwing her haunches at me was a warning... she was coming into season.  She's not exactly the soul of cooperation at such times.  I warmed up conservatively, with running martingale on, then detached it for the first test... Sooooo, about half way through, as the head got higher and the body got more thrown around, I, believing that of valour, discretion is the better part, retired, told the judge I would ride my second test with a martingale, HC.

Yeah, that didn't really go all that much better... at least 30 seconds at each halt before we actually had a halt... sideways.  There was some leaping about, pogo sticking, and general mayhem.  But, we finished the damned test!  Thanked the judge and off we went.

The interesting part was me.  There was a time when I would have set my jaw and this damned horse was going to do what I damned well told her... not any more.  Totally calm, not a trace of irritation (and I mean truly), just let's get this done.  The woman who actually sold her to me (her niece rode her now and again in a halter, she wasn't a hothead then), came specifically to tell me what a wonderful example of horsemanship I showed that day.  I just calmly schooled her and patted her when we were done.  She had to admit she'd probably be pretty mad at her.  The thing is, she is only who she is.  She can't help herself when she's in season.  She's quite lovely the majority of the time.  We don't ride her when she's in season.  If I'd have known she was coming in, I wouldn't have put her on the trailer.  And yeah, that means ditching the $200 in fees.

Mo is making me into a pretty good rider, building on the progress Maggie made.  And Havoc can only benefit from it.  He's a baby, and he's really scared to make a mistake.  That's who HE is.  He WANTS desperately to be a good good boy.  So, I need to be dead steady.  Thanks Mo.