Kelsey (photos in the comment below) is an intermediate level rider, but she seemed to be at a plateau- which is why she registered for the clinic. She works during the day seated at a computer, commutes back and forth seated in her car, and was having difficulty sitting her trot and following the canter motion. In watching her ride, it was clear that the seated position she is in all day was affecting her hip mobility, and that her hips were indeed fairly rigid. She has been riding for years and is only in her early 20's, so it was quite surprising to see how little fluidity she had in the hip joint.

When she dismounted as part of her clinic assessment to do some flexibility testing, the pieces really fell together. If asked to touch her toes, her fingertips were six inches above the ground and her back was quite rounded indicating both tight hamstrings and tight lower back/sacroiliac muscles. She also indicated feeling fatigued in the lower back. When asked to move her pelvis forward and back from the waist, she was barely able to do so. The connection between the tight pelvis, sacroiliac area and hamstrings is actually quite strong. The body has a large centre of fascial tissue in the lower back area, connecting the hamstring groups to the lower back area, as well as muscles through the hip area. In an extreme case of tightness, all the relevant areas can be affected as they were in Kelsey's case. Sometimes, stretching is not quite enough. Also, tightness is very often an indicator of weakness since strong muscles are less prone to getting stretching into a tight position. There is really a three-step process to unlocking this problem and improving flexibility in the tight muscle areas, as well as mobility in the hip joints


1. Release fascial tissue. Sometimes when a few stretches are not enough, you need to put gentle pressure on the tight knots either through massage, muscle release therapies, or self-release such as lying on a tennis ball, handweight, running shoe or other semi-hard object placed at the location of the knot.

2. Stretch regularly. Of course, stretches held for long periods are the next step to continue the releasing into the muscles, and to keep them supple. In Kelsey's case, we had her stretching her hamstrings lying on her back, as well as stretching her lower back by sitting on her exercise ball with legs straddled wide, and touching the floor between her feet with her hands. Another stretch in her program is the hip twist, lying on the floor with arms out and knees over to one side.

3. Strengthen the area through regular exercise several times a week. Kelsey will be doing 'supermans' lying on her stomach on the floor, lifting her arms and legs about 30 times, 3-4 times a week to build up better strength in her lower back. She will also be working on hip mobility by rocking her exercise ball back and forth while sitting on it, and moving her seatbones engaging core muscles below the waist.

Comment by Sarah Uecker on April 30, 2009 at 3:42pm
Hi Heather. I'm a 21 year old re-rider who is going back to the basics and filling up all the gaps in my riding knowledge. I'm currently riding dressage, but my goal is to start riding hunter-jumper or doing some eventing. It'll be a while before I can get my 'wings' as my trainer calls them. I need to be nearly perfect on the flat until I can start going over jumps. Or at least without any glaring issues. :D

My biggest problem in my riding that I'm aware of is the tightness in my hip flexors and the tightness in my left knee. I have a somewhat decent lower leg, primarily because all my lessons have been with out stirrups for the last 4 months or so. However, my left leg, both calf and thigh, moves a bit more in the trot and canter than my right does. I'm not sure if that's because of the knee, the tightness in the thigh, or both. I also have duck feet, where my feet stick out from the sides of the horse. It's painful to try to turn them in. It's very annoying, but I'm not sure how to fix that. I had known that my feet were sticking out a bit, but I was not aware of just how far they stick out. Those frontshot photos are a bit absurd.

I've also noticed an extreme tightness in my hamstrings off horse. I've been trying to stretch them a bit, but they are so incredibly tight that I feel as if I'm not getting anywhere, and they're not getting any looser. My hamstrings are so tight that while I can get my knee almost fully pressed against my chest if my leg is bent, I cannot even get my leg up high enough so that it's parallel to the floor if it's straight. While I use a mounting block to mount, I think it would be really beneficial for me to loosen those muscles.

I recently injured my quadriceps in an unrelated to riding incident, so I'm not allowed to do anything strenuous for several weeks. Now is a perfect time for me to start a stretching regimen, especially since I'll be going to PT for my quads. What are some good stretches to do to help me loosen up?

Sarah from Portland, OR 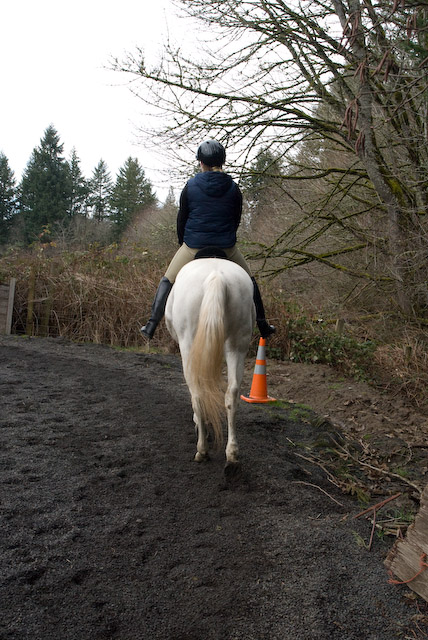 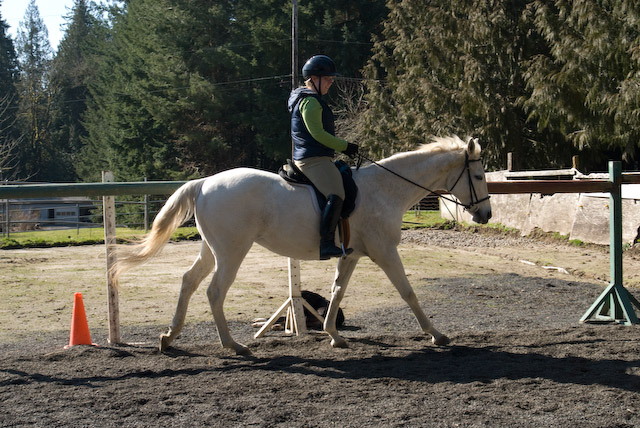 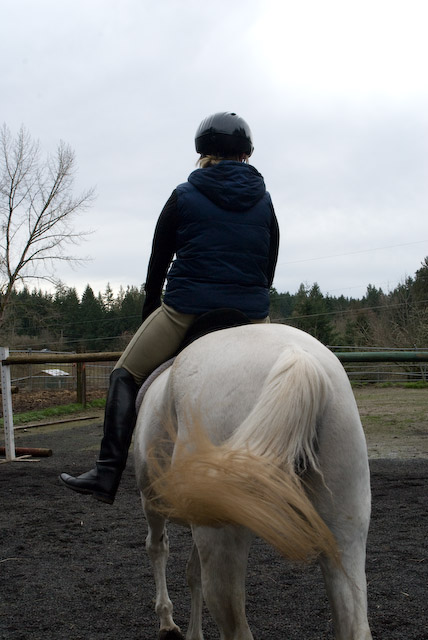 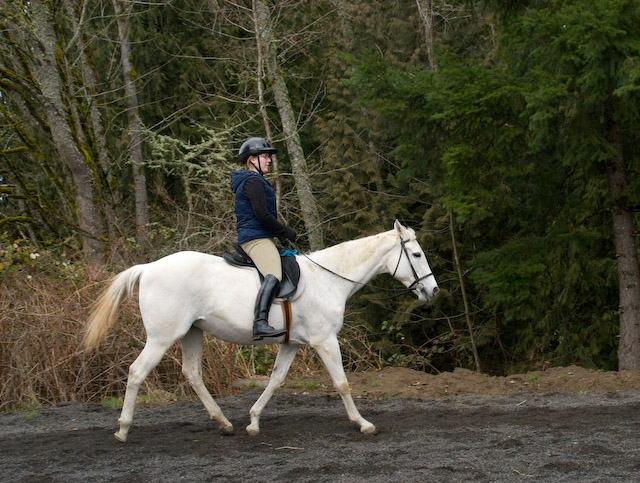 Comment by Kelsey Reid on April 29, 2009 at 11:18am
As an Office Administrative Assistant my day job is sitting in a chair with repeated tasks. Then a 30minute truck ride home. Just before taking Heathers clinic I was starting to get hip pain from sitting I figured to long and to straight. In college they tell you to sit straight and in the draft horse ring when driveing to sit straight. I just started jumping this January and noticed when jumping going into two point I have to think of my hip position. Heather suggested the exercise of hip rocking my exercise ball back and forth. I do so while watching Grey's Anatomy or other TV shows. So far my hip pain has left me.
I will be honest my boyfriends mother is a person who exercises three hours a day and has tryed to push billy blank videos, bowflex, bootcamps, crunchs, bikeing, running, and swimming insane amounts of time on to me and I get frustrated and bored or give up or big thing don't have the time to watch the videos or follow her. Plus costly!! A bowflex machine is $1,000.00 for basic when an exercise ball $10.00 at Canadian Tire.
With Heathers exercises I can do it while on the computer or in front of the TV or talking on the phone. Or even just doing a walking lung to the fridge while cooking in the kitchen. You may look goofy but when else are you going to do it. As Heather says start off with small chunks. See where you might be able to add it into your route of life.
With working mon-fri 9-5 and then home to cook and do laundry or clean or go out for a ride. There seems to be no time in a day. My biggest thing is I love my sleep so the idea I have to get up an extra hour earlier just to exercise is just not some thing I'm going to do. Even to spend an hour when I get home when I could be out riding or biking. No thanks. The idea of spending a few dollars compared to thousands of dollars I'm happy with.
Thanks Heather!!
I am very happy with the suggestions Heather has suggested and so far small improvements are starting to appear. I know so more time and I will notice a big improvement but so far I'm happy I don't have to get up an extra few hours just to exercise. Thanks Heather.