Whether choosing a steer to train or picking out a heifer or bull, we can gain clues to what they will be like by looking at the whorls on cattle’s head.

Whorls form in utero as the rest of the animal develops. When there is any abnormality in the cells, a whorl in the hair develops over it. As the brain forms, whorls develop where there is activity. Whorls on the outside of a cow give us a unique view to what is going on inside the cow. We can use them to judge temperament, health, and fertility.

There have been many studies done on cattle and their reactions to being run through the chute in comparison to their whorls. For the most part, cattle with center whorls were quieter and didn’t fight as much as cattle with higher whorls. Like in horses, high whorls show on cattle show an extrovert, energetic and reactive. This isn’t necessarily a bad thing. They are also curious and interested in everything around them. In a small study, cattle with high whorls were less likely to lose calves to predators. Being aware of surroundings and alert to everything around them can have benefits.

No whorls at all show the same basic temperament as a high whorl.

A center whorl is normal and basic. It shows that there are no extremes of temperament in any direction. They are generally thought to be easier to train.

Low whorls show quieter cattle. A good thing, but there are pros and cons to everything. Cattle with low whorls have been found to be harder to handle in a herd, they will leave instead of staying in the bunch. They are also more likely to lose calves to predators.

Any unusual whorls, long lines or set off to the side, show low fertility or difficult temperaments. Bulls with long whorls have been found to have very low fertility.

We can gain knowledge from the whorls across a cows body too. A long line, horizontal across the lower belly, can tell us if a cow is bred. High whorls on either side of the brisket are a sign of good health. Whorls on the hind legs show rich milk.

There are so many ways we can make use of cattle whorls to tell if they will suit the job we have in mind for them. It’s well worth a look at the whorls on your cattle! 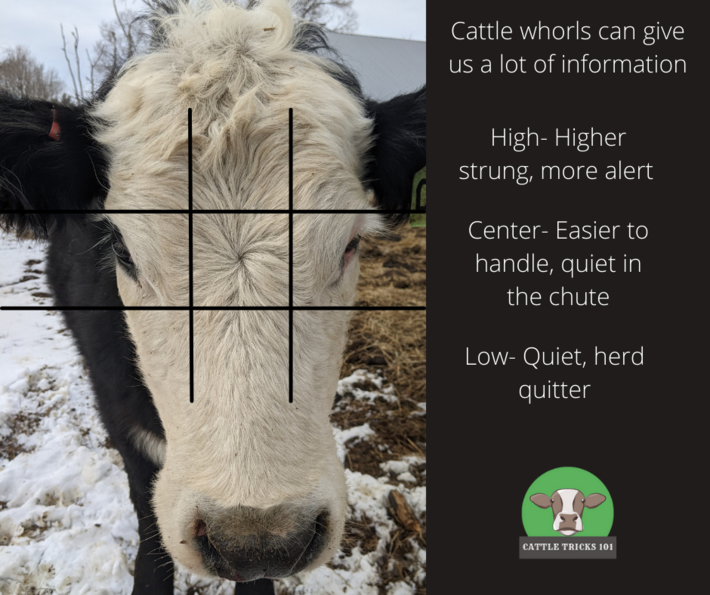