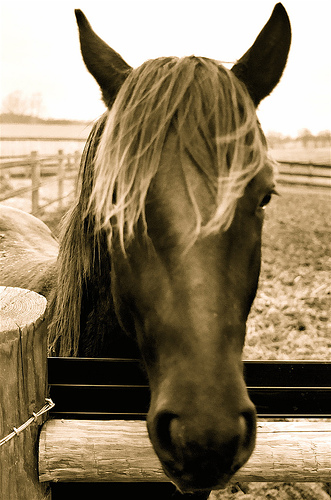 M-D Kerns has not received any gifts yet

It is a long way from Kazakhstan to Kentucky, but the journey to the Derby may have started among a pastoral people on the Kazakh steppes who appear to have been the first to domesticate, bridle and perhaps ride horses — around 3500 B.C., a millennium earlier than previously thought.

Archaeologists say the discovery may revise thinking about the development of some preagricultural Eurasian societies and put an earlier date to their dispersal into Europe and elsewhere. These migrations are believed to have been associated with horse domestication and the spread of Indo-European languages.

At the least, on the first Saturday in May the winning thoroughbred should perhaps be toasted not with a julep but a taste of koumiss, the fermented mare’s milk favored by equestrians in Central Asia. It is an acquired taste, so keep bourbon at the ready.

Evidence for the earlier date for equine domestication is described Friday in the journal Science by an international team of archaeologists. The report’s lead author is Alan K. Outram of the University of Exeter in England.

The archaeologists wrote of uncovering ample horse bones and artifacts from which they derived “three independent lines of evidence demonstrating domestication” of horses by the semi-sedentary Botai culture, which occupied sites in northern Kazakhstan for six centuries, beginning around 3600 B.C.

The shape and size of the skeletons from four sites was analyzed and compared with bones of wild horses in the region from the same time, with domestic horses from centuries later in the Bronze Age and with Mongolian domestic horses. The researchers said the Botai animals were “appreciably more slender” than robust wild horses and more similar to domestic horses.

Dr. Outram said in an interview that it was not clear from the research if the breeding of the tamed Botai horses had by then led to the origin of a genetically distinct new species. But their physical attributes were strikingly different, he added, and this made the animals more useful to the people as meat, sources of milk and beasts of burden and locomotion.

The second pieces of evidence were the marks on the horses’ teeth and damage to skeletal tissue in the mouths. The researchers said this was caused by the wearing of mouthpieces, bits, inserted for harnessing with a bridle or similar restraint to control working animals.

Other archaeologists, digging at other sites, have detected similar traces of what they said was bit wear, but this has been disputed as support for domestication. Dr. Outram said that some of the damage to the Botai teeth and jawbones could have been caused only by bit wear.

Botai pottery yielded the third strand of evidence. Embedded in the clay pots were residues of carcass fat and fatty acids that “very likely” came from mare’s milk, the researchers said. This “confirms that at least some of the mares of Botai were domesticated,” they concluded.

Just when and where domestication of horses first occurred has long puzzled archaeologists. Most of their investigations have concentrated on the steppes of Ukraine, Russia and Kazakhstan, where wild horses were abundant for thousands of years, and burials included the skeletons of prized stallions and early chariots.

In his authoritative book, “The Horse, the Wheel and Languages,” David W. Anthony, an archaeologist at Hartwick College in Oneonta, N.Y., said in 2007 that some of the best evidence put the beginning of horse domestication in the region around 2500 B.C. He could not be reached for comment on the new findings.

Earlier excavations at Botai sites, conducted by Victor Zaibert of Kokshetau University in Kazakhstan, uncovered piles of horse bones and settlement remains of a people who hunted and herded wild horses for their meat. Dr. Zaibert and Sandra Olsen of the Carnegie Museum of Natural History in Pittsburgh also found traces of bit wear that first raised the possibility that some Botai horses had been harnessed for work and riding.

Both Dr. Zaibert and Dr. Olsen are members of the current excavation team that may have fixed the early time and place for the beginning of the horse-human relationship — a relationship that, as Dr. Outram said, has had “immense social and economic significance, advancing communications, transport, food production and warfare.”

M-D Kerns said…
This is already old news but...

It is with no small measure of sadness that I report that the legendary horseman Ray Hunt has died.

Ray Hunt was Tom Dorrances’s “chosen one,” the one to whom he entrusted his inner & seemingly magical mastery of horesemanship.

As Tom Dorrance embodied & Ray Hunt frequently remarked–or words to this effect: It is an inside job.

In other words: It is the human who has to change. Show the horse what you want (communicate in her/his terms) & then GET OUT of the HORSE’s WAY.

Ray Hunt was primary mentor to Buck Brannaman (The Horse Whisperer), Frank Bell, & a host of others. Buck Brannaman–a real living legend, & Frank Bell shared living quarters for a time when they both worked under Mr. Hunt–who always put the horse first. Pat Parelli mentions that he studied with Ray Hunt but some have questioned how close he actually was to Mr. Hunt & how much time he actually spent with him.

We have lost a light &, just as when Tom Dorrance died, we will not likely see another like him.

Here is Blog with a nice tribute to Mr. Hunt–including a small list of Mr. Hunt’s memorable aphorisms:
http://www.oak-tree.us/blog/index.php/2009/03/15/ray-hunt

And here is the hyperlink Mr. Hunt’s Web site, with a portion dedicated to a report on his recent death:
http://www.rayhunt.com/