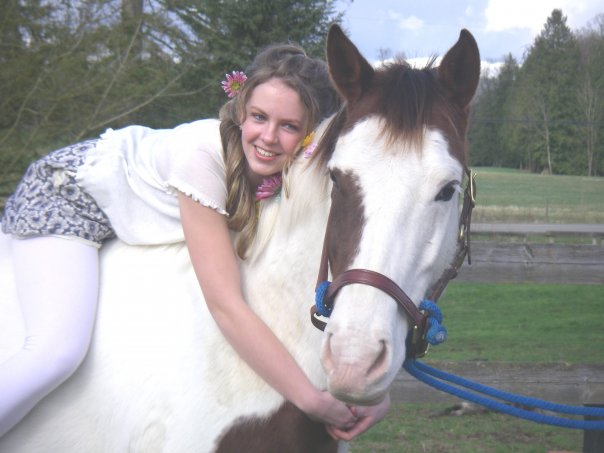 Nina Stevenson has not received any gifts yet

Give Nina Stevenson a Gift

Do you have any pets?
A dog, 2 cockateils, chickens, muscovy ducks, koi fish, and chinchillas

Zoe Brooks said…
It wasn't me who deleted it!! I was shocked to find it gone this morning. I guess the barncats got it. I am very dissapointed There was a reply from Elaine Ward-Turcotte that I never even got to read.

I know (from a very reliable source) that the big businesses who make bits had pressured the Royal to keep us out. You would think that if "Big Brother" (or Sister) removed this discussion - they would have had the courtesy to inform the people involved in it.

FYI: This messaage that arrrived yesterday is typical of people who do try our very unique bridle:

I wanted to let you know how impressed I am with the Nurtural Bitless
Bridle.

When my Arab stallion broke a leg in 1993, and his vet and I were unable
to save him, I thought I would never ride again. I kept my older
horses, but they led very easy lives as large pets.

Now, in 2008, I finally feel like riding again. I went in search of a
Saddlebred for the smooth ride, and ended up coming home with both a
three year old 3/4 Saddlebred/1/4 Arab, and his two year old half
brother. The three year old, Sam, is very well started under saddle.
His only problems were backing (he would only back a step or two at one
time) and occasionally throwing his head back (a real problem in a
high-headed breed). When I went to pick him up, I took my brand new
Nurtural Bitless Bridle with me, and asked the owner if they would like
to try it on him before we took him home. They were very excited to try
the Nurtural, as they had heard about bitless bridles, but never had one
to try out.

We were all astounded! This well mannered, but energetic gelding
usually has to be constantly checked back at a canter, but stayed at a
gentle canter with no checking. When asked to back, he happily backed
17 steps, no problem! And not even a tentative toss of his head. They
also have a routine of making each horse stop and stand before exiting
the gate from the arena, and Sam had previously "danced" while he
waited, but with the Nurtural, he stood perfectly still. His rider was
calling to everyone else, "Look, he's standing at the gate!" And the
next thing she said was, "I'm getting one of these bridles." (I have
emailed her your web address.)

A very lightweight teenage girl who was there suggested that we try the
bridle on the two-year-old, who had never been ridden and never had a
bridle on at all. I was a little nervous, but she seemed very
confident, so we fitted the Nurtural to Pip, and she hopped on him
bareback. From the first moment, he responded to the bridle as though
he were already trained: walking, trotting, turning and stopping on
command like an old hand. To be honest, he did have the reputation of
being the calmest, sweetest horse on the place (out of 48), but we were
still incredibly impressed!

Pip is a black and white paint, and soon I will be buying him his own
beta Nurtural in red. (Love that beta material!)

My advice to anyone trying to make up their mind about trying one of
these is - do it! If I didn't feel REALLY good about this bridle, I
wouldn't be using it after not riding for 15 years!

This is why I will continue to help good people around the world.

This Ning App is not visible to members on the Main page.