Zoe is a 5 year old registered quarter horse. I am training her for my best friend.
Another beautiful day. I got to the barn a little before 2pm. Zoe was in her stall and fairly talkative. I put on her rope halter. She didn't lower her head but she didn't raise it or pull it away either. (She will eventually put her head down for haltering and for the bridle.) I borrowed a hoof pick and started picking her hooves. I started…
Continue

Rode Amigo. Worked on the canter depart again. His canter is better going counter clockwise. I ended work when he did one depart really pushing from behind. Then my bestie rode him at the walk. So proud of my boy!

My goals for him is to create more impulsion and have a crisp canter depart instead of a bumpy trot going into the canter. He has come along way considering the fact that he used to try to buck me off every time I asked for the canter! There were no bucks and not even the… Continue

A work in progress

Ive been thinking (you can smell the smoke from there can't you) that I need to focus on the things I can change and let go of the crap that I can't. (sounds AA-ish, I am actually 7 and a half years sober.)

I'm not even going to talk about the "crap" I cant change right now and focus on what I CAN change.

**I am tired and unhealthy. I am, what I have recently found out, a "bad" vegetarian. I have been this way for about 3 years. I cut out meat but havent added any vegetables.…

Recovery...thats the word of the day. My hand that I cut open 10 days ago is healing very well. It still hurts to hold a hair brush, use a squirt bottle or use a body brush using downward strokes. Up until 10 minutes ago I couldnt take the cap off of my water bottle.

Part of my healing has been just getting back out to the barn to interact with my horses. Im a little nervous around them, since I am so protective of my hand right now, but thats fading away each time I go down…

Feeling pretty good today. I got two nice comments from fellow barnmice. Those kind of comments help put things into perspective without being discouraging. Thanks ladies!

Today, I rode Harley and Lazz. I basically worked on the same thing with both of them but was a little easier on Lazz. Harley is more used to what I was asking. I got a few nice roll backs with Harley and also some good transitions. He is still quite lazy but that isnt going to change in just a couple rides. He…
Continue

I was asked once, where I wanted to go with horses and what I wanted to learn. My reply was that I wanted to be able to work with horses and pay my bills that way. I dont care about getting rich, all I want to do is get by while doing what I love.
I think my answer was amusing b/c this person repeated it to another person like I told her the funniest joke and she just had to share it. I must say that that made me feel about an inch tall but I refuse to let that get me down…
Continue

Today I worked with Fergie a bit. She was kinda being a poop. She threatened to kick me. I then put her on a rope and worked on her "leg" yielding. She took a little bit to figure it out but when she did she did well. Im really happy with her progress.
I rode Bentley for a little while. I tried the saddle my uncle uses on him. He had never been ridden in it before but it seemed to fit him nicely. I wanted to cry when I thought about handing away his reins. I had my uncle…
Continue

I had a western riding lesson today. I guess it wasnt exactly a riding lesson as much as it was tips and help with getting the most out of Harley. My plan is to use him next year as my gymkhana horse. I had wanted to use Bentley but my western trainer thinks that his conformation will cause him problems when I really start to push him for speed. Im bummed about this. I dont want to do anything to Bentley that… Continue

Im a little bummed today. It was raining here today and I didnt get to ride or work with any of my horses. There was a small window mid afternoon that the weather broke and I could have taken advantage of it but didnt. I feel really guilty when I waste an oppurtunity to ride and play with my babies.

Yesterday though, I did ride two horses and worked with Fergie. September 18th Was the NWRDC Gymkhana. I took Bentley, my Uncle's Morgan gelding. We did pretty well. 1st place in the stake race. Two 3rd place, and a 4th and 5th place (I dont remember what I got what in.) I DQ'd in the…

Today was a beautiful day. I tried to work all my horses but only got a few done. Its all good though.

I did ground work with Fergie, (Painted Beauty), (my newest baby a 3 yo paint. The filly from my late paint mare, B (My Bayou Beauty). I got her completely green. So I am starting from scratch.)

I lunged Fergie in the arena with a western… 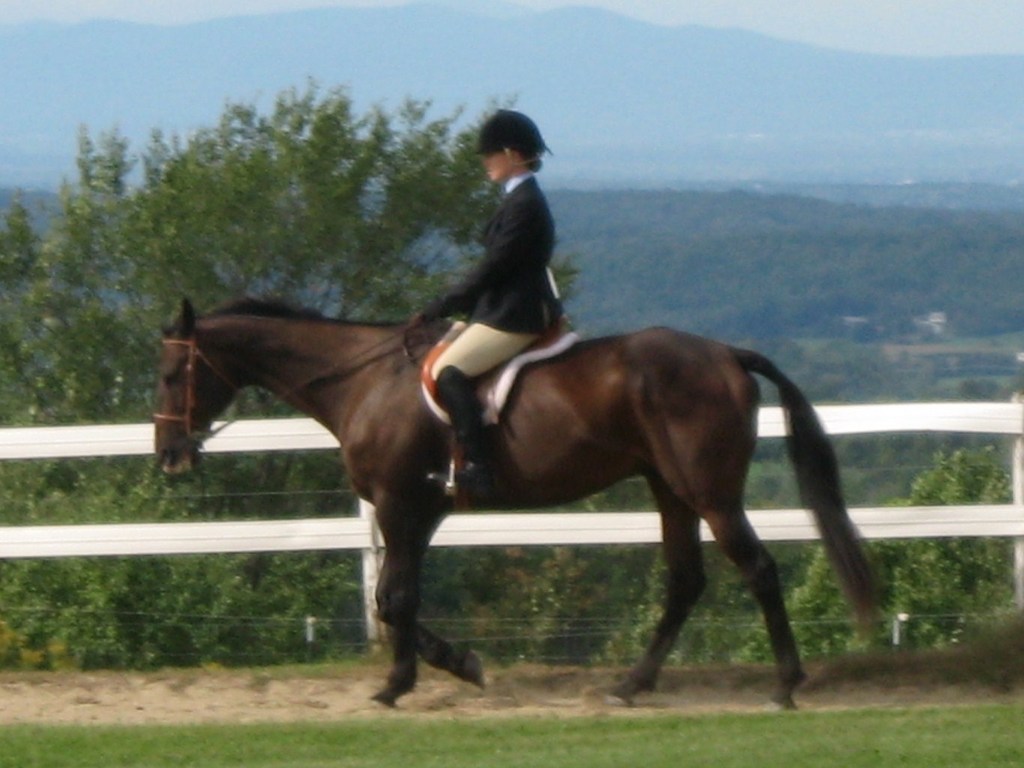 Today I worked Lazz. (14 yo OTTB that I free lease. that came to me June 20th 2010 in really rough shape. He had no muscle and was quite thin.) We worked on things I read in Centered Riding the night before. I worked at calming my self and FEELING my horse. I also worked on my contact on the reins which is a big problem for me. I feel like Im being kinder with loopy reins but I know now that Im not doing him any favors. I had…