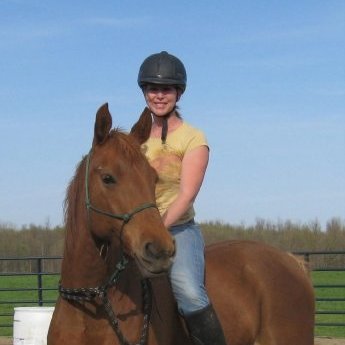 Amanda Hoss has not received any gifts yet

A Bit About Me and my Horse(s)
I have been riding for almost 5 years, but have loved all things horses for as long as I can remember. I can't seem to learn enough...I am always looking for more. I ask why this and then look for the answers.

Zoe is a 5 year old registered quarter horse. I am training her for my best friend.
Another beautiful day. I got to the barn a little before 2pm. Zoe was in her stall and fairly talkative. I put on her rope halter. She didn't lower her head but she didn't raise it or pull it away either. (She will eventually put her head down for haltering and for the bridle.) I borrowed a hoof pick and started picking her hooves. I started…
Continue

Rode Amigo. Worked on the canter depart again. His canter is better going counter clockwise. I ended work when he did one depart really pushing from behind. Then my bestie rode him at the walk. So proud of my boy!

My goals for him is to create more impulsion and have a crisp canter depart instead of a bumpy trot going into the canter. He has come along way considering the fact that he used to try to buck me off every time I asked for the canter! There were no bucks and not even the… Continue

Barnmice Admin said…
I'll report it to my tech people, and we can see if we can duplicate the problem from our end. Thanks for the note about it.

I'm not sure why it's not working. Are you able to load the photos onto your computer then add them to Barnmice? I am trying to figure out if it's something with your account or something with the phone-add.

Barnmice Admin said…
Hmmm... what exactly happens, Amanda? How far along do you get?

Ann Crago said…
Hi Amanda...You're welcome...It took me a long time to accept the death of my Suzie mare.She had been my friend for 17 years. I was blessed to find a lovely Haflinger Ziggy who waited patiently for 2 years for me to let him completely into my heart. Now I just love him...and I know if I ever lost him..It would hurt all over again...But that's the wonder of horses and the people who love them...We are courageous and try again...after what ever time each of us needs to heal...be it physical or emotional......Best Wishes

Barnmice Admin said…
Ohhh...So sorry to hear about your hand! Get better soon!