Learn How to Fat Score Your Horse

Do you know how to tell if your horse is just the right weight?


Fat and obese horses are now at epidemic levels in Britain, the charity World Horse Welfare has warned.
The charity released findings of a major survey indicating the public has trouble recognizing an obese horse and the health concerns that can generate.

More than half of 2150 members of the general public surveyed either did not correctly recognise an overweight horse or, if…

Many thanks to Barnmice member Geoff Tucker, DVM for allowing us to share his blog!

What to do about horses with diarrhea

A helpful Q&A from SmartPak for those with similar challenges:

I have a 26 year old TWH that has chronic diarrhea. He had vet work done last year, when it first started, with his blood work coming back normal, fecal exam okay and teeth are okay. No feed or hay change. Actually, his stool will be somewhat normal, not firm apples but has some substance to them, for most of the time then about once or twice a month it gets loose to the point of liquid. I had him…

Profiling the Connection Between Horse and Rider

This is such a good idea.

As riders, we know there’s a special connection between us and our horses that’s hard to put into words, but this bond is so strong that even non-riders can sense it. In an effort to better understand this relationship, our staff Photographer, Kristi (one of the few non-riders at SmartPak), will be visiting a different SmartPaker’s barn each month to…

We Want your Opinion! Take Our Brief Survey!

Please answer the questions below and add any interesting ideas or feedback you think might be helpful.

1. Which areas of Barnmice are your favorites?  Is…

Tell Us How You Met Your Horse and Be Entered to Win a Fabulous Bucas Wardrobe for Your Equine Friend!

Did luck lend a hand in helping you find your horse?

to win one of…

a fantastic prize package from …

Do you have a special Christmas wish for yourself? Your horse? The world?

Your July Horseyscope by Lauren Bode

I believe this year will be a hot one for you.
You will be moving so fast, it will be impossible to
stay in touch. Keep up the good work. You are giving your horse
a lot of attention and affection.  He needs both at the moment as
he is just coming out of a serious training period.
Leaving the past behind may be good for you, who really knows?
It will depend on your… Continue

Update on Joy the Orphaned Foal

We first met Joy last December after she was taken in by the incredible people at Quest Equine Welfare in Australia.

Joy had been found at one day old, lying in…

Your June Horseyscope by Lauren Bode

Happy Birthday!  A really interesting year lies ahead. Horses you met a long time
ago make a reappearance in your barn. Some things just have to happen, don't
question anything. Just when you think that nothing good comes your way, something
magical happens and you will be able to ride that magnificent steed. A great year
for taking all the riding lessons which you had promised yourself.… Continue

Congratulations to the Winners of our Bucas Photo Contest!

Avery Sharp for her photo of "Sky's the Limit" 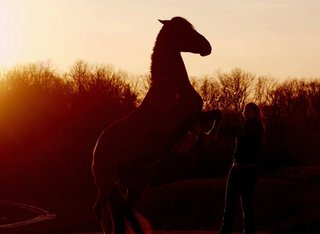 Amanda Erin Diggins for her photo of…