ADDED VALUE FOR ALL

Grand National fever again last Monday. This time the €250,000 Irish Grand National at Fairyhouse in Co Meath, not far from the famous Dreaper stable which once housed the greatest steeplechaser of all time, Arkle. It was won by the English trained, but Irish bred, Niche Market, brilliantly ridden by 19 year old Harry Skelton. There is a showjumping connection here as Harry is the son of British veteran Nick Skelton, who in recent years came back from serious injury and retirement to be one of the top riders in the world with the bay stallion Arco.

Nick holds the British equestrian high jump record, jumping over 7’7” on Lastic in London in 1978, and has competed at five Olympic Games (most recently in Athens in 2004). He has won ten European Championship Medals, six World Championship Medals, a World Cup Title and over 60 major Grand Prix’ titles. He also triumphed in the Du Maurier at Spruce Meadows on two occasions, a class which awards the highest prize money in show jumping history. I have always followed Nick’s career ever since my brothers John and Charlie started one of Nick’s great horses from the beginning of his International success, the ebullient St James.

The Irish Grand National was a great occasion as usual with 20,000 spectators and a huge television audience. However what I will remember and what produced the added value for me was Nick Skelton’s reaction on welcoming his son back. Such pride and pleasure, such obvious emotion and willingness to show that emotion. Here was a rider who has won over £4 million in prize money and over 1,500 classes yet still retains his love of horses and all that surrounds them, and who has also managed that great trick of keeping a good relationship with his sons.

WHEN LESS IS MORE

His gentle touch with his children is mirrored by his gentle touch with his horses. He allows both his children and horses sufficient freedom to get on with the job and take responsibility for what they do. Then when he gallops down to a big vertical at the end of a jump off, leaving out a stride in the process and riding with his trademark loose rein, he knows that his horse is used to standing on their own feet and doing what is required. As he does less his horses do more for him. They have that ‘fifth leg’ I talk about so much, while his boys mirror the famous three legged logo of the Isle of Man, and their motto…’Which ever way you throw me I will stand.’ As I always say, the sign of a good coach (and rider) is not how much they do for their student but how much the student does for themselves.

To arrive at this situation the young person has to be given responsibility and not be afraid of making mistakes, and then learning from these mistakes. Harry Skelton’s victory showed he has learnt his lesson’s well and his horse appreciated the gentle touch. He was given a patient ride with his Dad’s loose rein in evidence as he galloped over the birch fences, faster than a showjumper is ever required to go and upsides all the other horses in the race. The jockeys know that a horse must use their own equine legs to keep their balance. All of which made me think again of the possibility of using a bitless bridle for racing, especially as Nick is a regular user of bitless bridles on his showjumpers.

WHEN LESS IS MUCH MORE

Firstly there is a separate padded and shaped attachment designed to fit in the curb chain groove and under the bottom strap of the bridle (see photograph). Many horses go really well in this, and it is much kinder than a traditional show jumping bitless bridle, which often causes great pain and damage inside the mouth, including to both the soft tissue and the protruding upper jaw molar teeth. 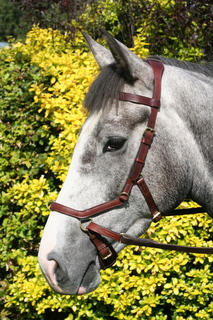 Secondly, once they get use to this and if I am working in an enclosed arena with a trained horse I often just attach the reins to he main side ring. 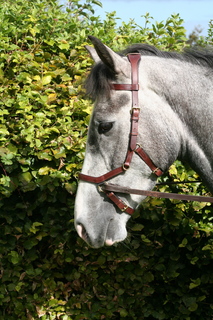 The third alternative is a stronger bitless bridle that most horses love. You add the long bitless strap over the head, through the elastic keeper on the headpiece, cross it behind the jaws and bring out through the side rings, before adding the reins. This has proved to be a great bitless bridle for many horses and we have used it successfully on most of our 15 school horses at the Festina Lente Foundation for the last six months. Unfortunately and curiously this cross over strap arrangement is patented in the USA by Dr Robert Cook, despite the fact that he admits he didn’t invent it. Therefore in the USA market it cannot be included with the Micklem Multibridle, which is disappointing as it is not in the best interests of the horse. However in the rest of the world we include the cross over strap and in the USA it is easy to add your own strap. I will continue to promote the value of bitless bridles for some, but not all horses, but by preference I prefer well fitting simple bits, even though it may be an uphill struggle to get riders to have soft 'allowing' hands and rein contacts.

Bits are mandatory in pure Dressage and the Dressage section of Eventing so I try to ensure most of my horses are happy with a bit. I start my young horses off on the lunge, using a bit but with no pressure on the bit, and using my Micklem bridle with the lunge line attached to the ring at the front of the nose. Despite it’s light weight it is wonderfully secure and comfortable and avoids all the problems of trying to fit both a bridle and lunge cavesson together or tying to lunge off a traditional bridle. Then when they are quiet in the mouth I introduce side reins, but using the clips so that any accidental extra pressure is taken on the nose rather than the tongue or bars of the mouth. This works wonderfully well and I have yet to find a better lunge cavesson. You can see it in use as a lunge cavesson on young horses in my book, the DK Complete Horse Riding Manual, and you can also see another type of dropped noseband lunge cavesson in use at the Spanish Riding School in Vienna. So the Micklem Multibridle is also classical, but it is more comfortable as there is no need to use a separate bridle and it just fits better.

The Micklem Multibridle can also be used as a headcollar….... just take off the extra bitless bridle attachment or bit and it is a headcollar to use traveling to your competition or during your long distance ride....or with the bit attached the side rings are ideal for cross tying without having to attach the cross ties to the bit itself.

So there is huge added value with the Micklem bridle as it is really 5 pieces of equipment in one and because it helps you do better quality work as the horse is more comfortable. Nick Skelton knows all about the vital importance of doing good quality work in practise rather than establish bad habits with poor quality work. All his young horses go well in the basic work he asks them to do. Therefore he develops good habits which in turn accelerates progress. As Aristotle said, “We are what we repeatedly do. Excellence therefore, is not an act but a habit.”

Nick also knows that making the effort to do things well is really just part of a good attitude to your life, and that a good attitude is more important than anything else. It is about having a passion for life, about friendship, trust and second chances; and about the fighting spirit and mighty spirit that gives Nick and Harry Skelton their winning edge…and gave Arkle his winning edge. I remember his wonderful winning days so well….such awe inspiring happy days. William

Comment by Jackie Cochran on April 24, 2009 at 2:28pm
Is there ANY way I can get the length of the cross-under attachment for the pony, small horse (cob), standard horse and warm-bloods so I can get them made here in the USA? I am falling in love with your bridle and I would love to have this alternative, but I do not need reins that are suddenly 1/2 foot to one foot too long as (because of my Multiple Sclerosis) I have some problems with handling reins that are too long (or too short).
I have used your bridle on only one horse. When I finally got my standard horse bridle to reasonably fit the Arab mare I am riding, ALL RESISTANCES, MENTAL AND PHYSICAL, DISAPPEARED WHEN USING THE BIT. Since I have good hands, this is a very subtle change, but very, very welcome.
Thank you for your wonderful invention.