I wasn’t quite honest last week as I praised Arkle, arguably the greatest steeplechaser of all time…or to be more exact I was being disloyal. Disloyal to my childhood hero Mill House, who was the magnificent winner of the 1963 Cheltenham Gold Cup, and destined to be the King of steeplechasing for many years. So in 1964, when Mill House was hot favourite to win his second Gold Cup I could only watch in shock as Arkle swept into the lead to record the first of his three triumphs in this championship race. I never quite forgave Arkle and remained totally loyal to Mill House….until last week. I must be growing up!

Of course we all tend to be ruled by our hearts rather than our heads, particularly when we are young and impressionable. We easily develop a loyalty to horses, trainers and equipment that flies in the face of logic. This is one of the reasons I am so wary of ‘gurus’. They can abuse this loyalty by putting blinkers on their students and convince them they are disloyal if they study with another trainer. Often these gurus are not at the cutting edge of training but instead just on another road, which is more of a diversion than a better road.

Such loyalty is also the fundamental reason for ‘fashion’ in equipment, which the equestrian world is full of and horses suffer from. I promise I won’t mention this again in my blogs, but we need to recognise that the use of cranked up cavesson and flash nosebands is largely just a fashion. We owe it to our horses to look at them as individuals and ask ourselves is there an alternative? There is an alternative. The use of both the Mexican Gracle or figure of eight noseband and my Micklem bridle are specifically designed to avoid the protruding molar teeth of the upper jaw, which when combined with a tight cavesson noseband can cause so much discomfort to the soft tissue sandwiched between.

Unfortunately the protruding upper jar molars are hidden from view. However if you look at a skeleton and separate the two jaws of the skull the big difference between the width of the jaws is only too obvious, as can be seen in this photograph. 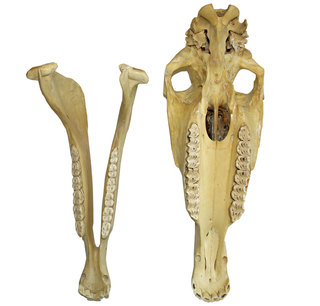 In addition most of us are unaware of the exit point for the motor and sensory facial nerves that is directly under a normal cavesson noseband. These nerves, shown below in blue, can be squashed between the nose bone and the noseband, causing numbness not only round the nose but also around the bit itself. Can this be sensible? 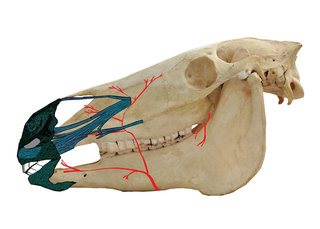 Arkle was trained by the gentle and perceptive master trainer Tom Dreaper, who treated every horse as an individual and used to give Arkle a pint of Guinness each day in his food! The other truly great Irish trainer at this time was Vincent O’Brien, who trained at Ballydoyle in Co Tipperary. This training facility is now in the hands of Aidan O’Brien, no relation, but with the same quiet good sense and brilliance, and a truly extraordinary record of success that now includes twice winning 23 Group 1 flat races in a season.

Aidan was interviewed last week by a number of journalists at the start of the new flat racing season. What he had to say was surprising for many but also deeply heart warming and inspirational to me and so many other coaches. Speaking of his two year olds: “Some of the horses will go back, some will stand still, some will go forward – but at the moment we all believe they’re champions. That way you give them a chance of being champions.” Just imagine what Susan Boyle (the 48 year old singing sensation discovered on the TV show Britain’s Got Talent with over 40 million views on You Tube last week) would have achieved if she had met a coach with this attitude in her early days.

Aidan was asked if there were times when a horse is beyond redemption…when it is simply devoid of talent? The suggestion made him indignant. “Why would a horse have no ability? They all do, of course they do. Just as there’s no such thing as a person that’s not good at something. There’s no blueprint for every horse but there’s always a solution to every horse. Sometimes you get it right…the majority of times you get it wrong.” The very humbleness of this great trainer is of course a core reason why he keeps questioning his methods and keeps improving.

Racing is so different from most other horse sports because of the pressure horses are put under at the end of a race. They are taken to their maximum and horses lacking courage tend to quickly throw in the towel and become less than willing participants. In my opinion this is why the best of the Thoroughbred blood is so important for the sport horse population, as it helps produce willing partners who think forwards. Unfortunately this TB blood is usually hidden behind ‘breed’ labels, and this does us all a disservice.

For example Shutterfly and Ravel, the magnificent winners of respectively the Show Jumping and Dressage World Cup finals in Las Vegas last week, are both approximately half thoroughbred, but you won’t hear this mentioned by the breed societies. In fact on their TB side they are related and surprise, surprise, they are also related to Arkle. This is not just a fluke or a coincidence, as the best TB lines follow through the majority of elite performers in all disciplines.

THE OTHER SIDE OF PRESSURE

Aidan O’Brien is quick to recognise that he is part of a business and that his patrons are eager to explore the full potential of their stud prospects. “They don’t want to be sending a false horse to stud, and their big horses are run hard.” Which is another way of saying that horses are taken to their limits. However Aidan was quick to qualify this with a comment that has huge significance. “We need to push the horse without showing them their dark side.”

This is the genius of Aidan and every top trainer I know from all disciplines. He knows both how to gradually extend their limits and go close to those limits but not beyond. To Aidan every horse is a sensitive entity that needs respect and empathy if we are to avoid bringing out their alter ego. Empathy requires us to think like our horses and stand in their shoes. That great equestrian author and head of the Spanish Riding School, Alois Podhajsky, wrote one of the most empowering statements when saying, “The first and foremost principle of training is to have empathy with our student.” Of course it applies to both human and equine students and it is a lifetime challenge. With even partial success in this area your ability as a rider or coach will dramatically improve. Happy days. William

Comment by William Micklem on April 25, 2009 at 6:45pm
Yes Chris your wish is our command....the new Micklem Competition bridle has just arrived...no bitless additions or ring in the nose...unfortunately in brown at the moment but we will get to the black...both versions fully approved for British Dressage...will leave you to supply the bling! Good luck. William

Comment by Chris - resident queen of shops on April 25, 2009 at 6:23pm
Thanks for responding to my question William. Would you consider asking horseware to make a "show version" of your bridle for use in affiliated dressage competitions? I think the ability to use the bridle as a cavesson is so useful on a busy hard when time is of the essence but a black leather stripped down version of the bridle minus the rings would be more aesthetically pleasing for us dressage queens in the ring! (& a diamante browband would make it just perfect ;-) )

Comment by William Micklem on April 24, 2009 at 7:04pm
I like using a dropped noseband Chris but not a German dropped noseband that fits low on the nose with the front and back strap the same height. This is bordering on cruel and is the cause of the hairline fractures to the fragile nose bones at this part of the skull...see my photograph of the skull. So the front nose piece has to be high enough...4-6 fingers width above the top edge of the nostrils. Then the front nose piece must be short enough so that the back strap can angle down and round the bit and fit comfortably. The down side of this is that the side strap has to cross over the protruding cheek bone on the outside. My Micklem bridle is a version of a dropped noseband but with the unique side shape it fits much more easily and you don't have to have the full weight of the bridle sitting on the narrow nose band strap running under the headpiece. It works wonderfully well. Thanks for your interest Chris. William

Comment by Chris - resident queen of shops on April 24, 2009 at 6:52pm
Hi William. You mentioned the grackle noseband as a better alternative to a cranked flash but no mention of the traditional drop. I'd love to hear your opinions on this.

Comment by Geoffrey Pannell on April 24, 2009 at 6:29pm
lanyonriding@skymesh.com.au Thanks William

Comment by William Micklem on April 24, 2009 at 6:22pm
Give me your e-mail Geoffrey and I'll make sure they contact you. Thank's for your encouragement. William

Comment by Geoffrey Pannell on April 24, 2009 at 6:15pm
Thanks William, It's great to hear someone standup for the TB. As you say it's the TB part of those horses that makes them the champions they are. I'm still trying to get hold of one of your bridles, for some reason I can't seem to get hold of the horseware people. I might just make one myself from the photos youv'e posted. Keep up the great blogs, They very informitive and entertaining. Cheers Geoffrey