Mintse - Painting of a Friesian Stallion 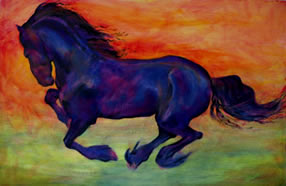 When I decided to travel to Michigan for this year's series, I emailed the De Boer Family to ask if I could include Mintse in the series. They graciously said, "Yes."

When I arrived to photograph Mintse, he was gleaming! The family had spent hours preparing him for my visit. And the whole family was on hand to make sure Mintse galloped around the huge pasture and didn't stop to eat and accidently step on his luxurious mane. (The crew is pictured on the "Beautiful Horses of Michigan" page.) Mintse gave a dramatic performance demonstrating the animated movement that Friesians are famous for.

This statuesque horse is .... well I said it before .... breathtakingly beautiful! It was so fun to get to photograph him. And very tough to decide how to depict him in his painting. My goal was to portray his dramatic energy, bold movement and power.

Hopefully someday you will get to meet Mintse. It's a great experience.