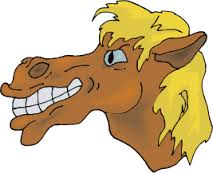 Today I wanted to curl up into a ball and ask why. Just why?

Why am I still nervous, why is he acting like this and why can't I stop it?!

Today Cody and I worked together while Sam and Tilly, a young Clydesdale mare, worked together. Cody, I believe, has a crush on Tilly. She's his favorite horse at the barn outside of Jac. He concocts quite the attitude when I refuse to allow him to see her.

I covered ground work today with him and lunged him hard before I rode. He did good on the ground work. Lungeing he wasn't eager to go, so I used the trust carrot stick as motivation. I pushed him into a canter gallop and then run before hopping on. I encountered my first issue while mounting.

I had just got my foot into the stirrup when Cody decided to go and trot away, barely giving me time to get my foot out. After repeated corrections,he finally stoop still with his head down as he should. Usually I trot a couple laps before doing my routine. We'd barely made it halfway when he decided he needed to be near Tilly. Before I knew it we were sidestepping across the arena to Tilly. I kicked him hard with my heel and turned him around. He tossed his head and tried to CANTER to Tilly when I clearly said to trot away. I proceeded to kick,and kick and kick again and again, which usually curtails that behavior. Not today. My 'before I lose my temper' correction for that is to put him on a small circle and back up until he stops resisisting me. Today, when we backed up, he took that as permission to canter yet again. I kicked hard and he ignored me and everything else I did. Only Tilly existed. I needed his attention and decided a sharp pull on the reins would do the thick, knowing the bit would bite him back. While I did get his attention, it wasn't in the manner I'd hoped for. He proceeded to toss his head;snort;kick out with his front leg;tuck his chum and again break into a canter. I corrected him and then got off. While he thought he was finished,I had other plans. I put him back on the lunge line and ran him until he was panting,and then did more Parelli ground work. When I was sufficiently relaxed he looked sufficiently tired, we went back to the stable. His blanket was put on and the horses were given hay.

It seems to me, that as I've grown more assertive, he's grown more hostile in his responses,almost as if he's saying "Oh really? Who do you think you are? Prove it" and I must prove it or else all This will be hope less. As Sam told me, he's gearing up for a fight I must win. Guys, call the paramedics and pray for us.

On the plus side of all This, he took the bit on the first try. If I see him Wednesday, I'm going to work him Oh so hard.

Another issue I am having is me. When other riders are present I grow nervous. I stress over whether I am in their way or if their in mine. I worry about if their horse spooks, will mine and what then. I fear running into another horse or person. If another horse looks remotely jumpy, I become jumpy, worrying Cody might become jumpy. So, I try to avoid this problem by avoiding other riders and Horses. Unfortunately, this has escalated for me, and I must find a way to face and handle my own fear and source of anxiety.

Up top:On the left how I visualize Cody. To the right, how he visualizes me.

Ah, you ran into the severe limitations with using backing up as a correction.

When you back up a lot it can put the horse's weight on his hind end.  In this posture the horse is in a physical stance where he can easily produce "airs above the ground".  This can be SCARY since when the horse is in this stance he can easily rear, kick out, act like a pogo stick, and put his chin back enough so the hand aids will not work if you do not time them correctly.  (Yes, I've been there.)

99% of riders go through this at least once in their lives (the horse blowing us off.)  As you get more experience you will learn to catch the horse BEFORE he makes his movement, since this is really the only time that you can get them to stop easily.

I have found that even beginner safe horses will gleefully show a rider the faults in their riding when the rider decides to ride at a higher level (being in control of the horse at your level.)  Horses do have a sense of humor, a sort of crude sense of humor, think of a bratty two-year old human and you will get the picture.  The only way I was successful with my first horse, the just gelded, three weeks of training under saddle, five year old HOT Anglo-Arab I got, was to follow Forward Seat, Forward Control, and Forward Riding.  I still had PROBLEMS, but he did not give me "airs above the ground" because I worked at keeping out of his mouth.  Oh I had lots and lots of problems, got carted around the landscape several times, ended up with death grips on the reins, all the beginner mistakes, but my death grips on the reins did not last long enough to get him on his hocks.  Luckily my first horse was an angel from heaven though there were many occasions the first few years I did not think so!

It will get better as long as you do not give up.  We all go through this, the uncertainty, the fear, the confusion, the "why in the H-LL won't the horse obey me!"  It is all part of learning to ride.